In Last Bailout, the Fed Outsourced Management to the Banks Being Bailed Out – then Paid them Huge Fees for their Work 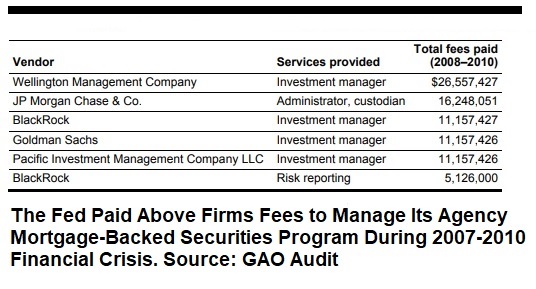 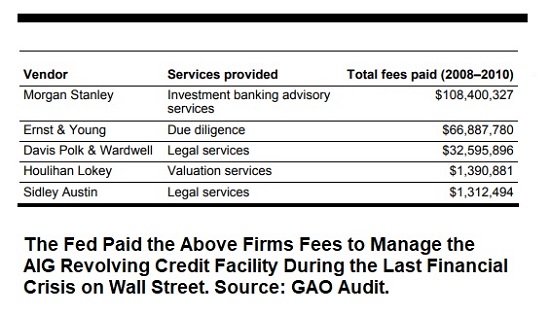 Many of the darkest secrets of the Federal Reserve’s bailout of Wall Street banks during the 2007 to 2010 financial crisis are cryptically contained in the government audit of the Fed’s emergency lending programs that was released to the public on July 21, 2011. A careful reading shows that some of the very same Wall Street mega banks that were in desperate need of, and receiving, bailout funds from the Fed were given assignments by the Fed to oversee parts of the bailout. Making the situation even more ludicrous, those same firms were paid huge fees by the Fed for their work. There is good reason to believe that the same plan is in the works for the Fed’s latest bailout.

The audit by the Government Accountability Office (GAO), the nonpartisan watchdog for Congress, shows that during the last financial crisis Morgan Stanley was paid fees of $108,400,327 for “investment banking advisory services” on the AIG revolving credit facility. Morgan Stanley was also the second largest recipient of bailout funds from the Fed, receiving $2.04 trillion in secret, revolving, below-market rate loans from the Fed during the last crisis. (Only Citigroup eclipsed that total, with $2.51 trillion in secret loans from the Fed. See chart below from the GAO audit.) A court order and Dodd-Frank legislation finally forced the Fed to release the names of the recipients and loan amounts.

But the story on Morgan Stanley and AIG doesn’t end there. AIG was the giant insurance company that had become a counterparty to Wall Street’s credit derivatives and securities lending programs. In order to make Wall Street whole on its bets with AIG, the government seized AIG and paid Wall Street 100 cents on the dollar for what AIG owed to Wall Street and global banks – which came out to more than $90 billion. While Morgan Stanley was being paid for its so-called investment banking expertise, it was also collecting 100 cents on the dollar under the AIG bailout. AIG was finally forced to reveal the names of the Wall Street banks that got this behind-the-scenes bailout.

Goldman Sachs received $814 billion in revolving loans from the Fed during the last crisis. (See chart below.) It was also paid $11.15 million as one of the investment managers for the Fed’s agency mortgage-backed securities (MBS) purchase program.

JPMorgan Chase received $391 billion in cheap revolving loans from the Fed. It was also paid $16.25 million between 2008 to 2010 as custodian for the Fed’s agency mortgage-backed securities purchase program. According to contracts posted at the New York Fed’s website, JPMorgan Chase has continued to serve as custodian for that program since that time. Its cumulative fees are thus likely to be many multiples of the $16.25 million. As of last Wednesday, the Fed’s balance sheet showed that it had $1.78 trillion in agency mortgage-backed securities. That is a lot of securities to entrust to a custodian, JPMorgan Chase, that has pleaded guilty to three criminal felony counts in the past six years and is under another Justice Department criminal probe for allowing its precious metals desk to be turned into a racketeering enterprise.

The Fed had another peculiar relationship with JPMorgan Chase. The largest of the Fed’s bailout programs was the Primary Dealer Credit Facility (PDCF) which funneled a total of $8.95 trillion in below-market, revolving loans to the trading houses on Wall Street. But the GAO audit states that the Federal Reserve Bank of New York (which the Fed put in charge of the bulk of the bailout programs) “did not have contracts with the firms that helped operate the PDCF….” Those two firms were JPMorgan Chase and Bank of New York Mellon. The New York Fed admitted to the GAO that it had no idea what fees the trading houses on Wall Street paid JPMorgan and Bank of New York for borrowing $8.95 trillion.

Under the PDCF, the Fed allowed the trading houses to post collateral for their loans that included stocks and junk bonds – at a time when both markets where in a state of collapse. JPMorgan and Bank of New York were responsible, not the Fed, for evaluating if the trading houses had posted adequate collateral to get their loans. This is yet another example that Wall Street, not the Fed, was in control of its own bailout.

During the financial crisis of 2007 to 2010, BlackRock collected fees from the Fed of at least $212.02 million. BlackRock was the investment manager for Special Purpose Vehicles called Maiden Lane, Maiden Lane II and Maiden Lane III that the New York Fed established for single-entity bailouts. Maiden Lane bailed out the toxic assets of the collapsed Bear Stearns so that JPMorgan Chase could buy the good parts of the firm. Maiden Lanes II and III handled the bailout of AIG. The bulk of the fees paid to BlackRock came from the Maiden Lane programs. BlackRock was also paid fees on the agency mortgage-backed securities program for the Fed and assisting in selecting the assets to ring fence at Citigroup in order to give it a guarantee on more than $300 billion of its assets at a time when confidence in the bank was at a low point on Wall Street.

Everybody connected to the bailout got a big payday except the American people. Millions of Americans lost their homes, their jobs and their life savings. As Senator Jack Reed said in a Senate Banking hearing on Tuesday, it’s looks like déjà vu all over again.