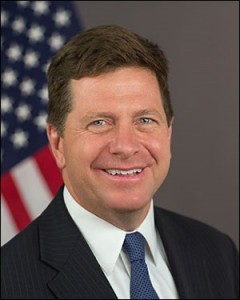 The Investor Protection, Entrepreneurship, and Capital Markets Subcommittee of the House Financial Services Committee convened a hearing today on capital markets with the Chair of the Securities and Exchange Commission, Jay Clayton. The hearing had been scheduled prior to last Friday evening’s abrupt and controversial sacking of the U.S. Attorney for the Southern District of New York, Geoffrey Berman, by Attorney General William Barr and President Donald Trump. A statement released by Barr on Friday night stated that the President would be nominating Clayton to fill the post. Clayton has no prior experience as a prosecutor and would be taking over one of the most important federal prosecutor’s offices in the country.

As Democrats attempted at today’s hearing to get details on how this chain of events came to occur, Bill Huizenga, the Republican ranking member of the Subcommittee, and other Republicans, attempted to halt this line of questioning of Clayton. As a result, it took three hours of interrupted questions from multiple Democrats to get Clayton’s final version of the facts.

Congresswoman Carolyn Maloney of New York asked Clayton when the issue of him getting the job as U.S. Attorney was first raised with President Trump and the Attorney General. Clayton first said “last weekend.” That obviously could not be accurate because the announcement from Barr came on Friday night, June 19, ahead of the weekend. Maloney then asked Clayton if he had known at the time that Berman would be fired to make room for him. Clayton said: “I’m not going to get into that here.”

Congresswoman Madeleine Dean of Pennsylvania was able to clear up the confusion about when Clayton had actually talked to the President and Barr about the job. Clayton corrected himself that the conversation had actually occurred “the weekend of the 12th.” (Perhaps Clayton has been taking 3-day weekends because the 12th was actually a Friday.)

Congressman Bill Foster of Illinois wanted to know if Clayton had any conversations regarding the federal prosecutor’s job with anyone in the Trump family organization or Trump’s lawyers. Clayton said: “I don’t want to go down the road of getting into all of these things.”

Congresswoman Sylvia Garcia of Texas asked Clayton who approached him about the job as federal prosecutor or did he approach someone. Clayton said: “This was entirely my idea,” adding that he wanted to “leave it at that.” Garcia responded: “Unfortunately I can’t. I understand that you understand that this is not a confirmation hearing. But the reality is that you are before Congress, you are before a committee and anytime anyone comes to testify before the United States Congress they know they’re subject to any question on just about anything. You may feel uncomfortable, you may not want to answer the questions but until you run to be a member of Congress, I get to ask the questions.”

The ranking member, Bill Huizenga, then interruped Garcia to attempt to stop this line of questioning. The Chairman of the Subcommittee, Democrat Brad Sherman of California, said that Garcia was correct that she had the right to ask these questions. Huizenga continued to argue the point. Sherman told him if he wanted to write an OpEd, he should put it in The Hill or Roll Call.

Sherman had opened the hearing by reading the statement that Senator Chuck Schumer of New York had released regarding Clayton’s nomination. It read:

“Forty seven years ago, Elliott Richardson had the courage to say no to a gross abuse of presidential power. Jay Clayton has a similar choice today: He can allow himself to be used in the brazen Trump-Barr scheme to interfere in investigations by the U.S. Attorney for the Southern District of New York, or he can stand up to this corruption, withdraw his name from consideration, and save his own reputation from overnight ruin.”

Clayton showed no inclination during the hearing that he plans to withdraw his nomination.