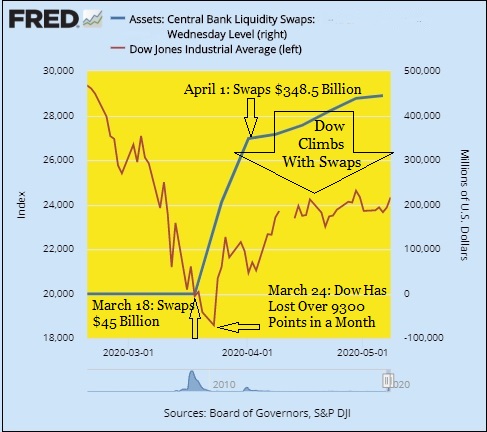 The Dow Jones Industrial Average rallied 455 points by the closing bell on Friday. It seemed sadistic to average folks. One hour before the stock market opened, the Bureau of Labor Statistics had reported the worst U.S. unemployment figure since the Great Depression (14.7 percent) along with the staggering loss of 20.5 million jobs in just the month of April. Within the first half hour of trading, the Dow was up more than 300 points. It then added to those gains in afternoon trading.

None of the explanations offered by mainstream media to explain the incongruous stock trading were accurate. It was not because the stock market had anticipated worse or that the market was rallying because it thought the worst of the economic fallout was behind us. It was because the one emergency funding facility that the Federal Reserve has quietly ramped up more than any other, its Foreign Central Bank Liquidity Swap Lines, was working its magic on Friday.

Beginning on February 3, Powell started dialing the head of one central bank after another. We know this because his daily calendars are made public. Before the month of February was over, Powell had spoken to, or met with, the heads of 14 different foreign central banks. This was an unprecedented number of central bank contacts in such a short period of time for a man telling Americans everything was fine with our banks and our financial system.

Equally curious, it wasn’t just the biggest players that Powell spoke to, like Christine Lagarde, President of the European Central Bank (ECB); Haruhiko Kuroda, Governor of the Bank of Japan; Mark Carney, then Governor of the Bank of England; and Yi Gang, Governor of The People’s Bank of China. Powell also dialed up the heads of the following central banks: Canada, Netherlands, Brazil, Mexico, South Korea, India, Switzerland, Belgium, Sweden and France. All in one month.

Two weeks after the last phone calls were made in February, the Fed sprang into action.

On March 15, the Fed announced that foreign central banks with regular U.S. dollar liquidity operations would “begin offering U.S. dollars weekly in each jurisdiction with an 84-day maturity, in addition to the 1-week maturity operations currently offered.”

On March 20, the Fed announced that itself along with the Bank of Canada, the Bank of England, the Bank of Japan, the European Central Bank, and the Swiss National Bank would be increasing the frequency of its 7-day swap line offerings from weekly to daily.

As the chart above indicates, the outstanding swap lines on the Fed’s balance sheet have grown from $45 billion on March 18 to $348.5 billion by April 1 and now stand, as of last Wednesday’s H.4.1 report from the Fed, at a stunning $444.89 billion.

That is the largest of the Fed’s emergency programs by a factor of more than two to one. Its repo loans have an outstanding balance of $172.7 billion. Its Discount Window loans stand at $26.5 billion. Its Primary Dealer Credit Facility (PDCF) loans (where it is accepting stocks and Wall Street toxic waste known as CDOs and CLOs as collateral from the trading houses on Wall Street in return for ¼-percent interest loans) stands at $14.9 billion. Its Money Market Mutual Fund Liquidity Facility has racked up $42.8 billion. The Paycheck Protection Program Liquidity Facility, where it buys the small business loans the banks have made (that were already guaranteed by the Small Business Administration) stands at $29.1 billion. The Fed’s Commercial Paper Funding Facility stands at $3.9 billion.

The Fed’s announced purchases of investment grade corporate bonds, junk bonds and junk bond Exchange Traded Funds (ETFs), which have set an initial goal of scooping up $750 billion in sinking paper, have yet to invest a dime; likely because the legality of those programs are still being debated.

But it’s not just the exponential growth in the Fed’s Foreign Central Bank Liquidity Swap Lines that is propping up the U.S. stock market. It’s the carefully calculated disbursement of those swap lines to foreign central banks that are already propping up the stock market through the purchase of stocks and corporate bonds.

The second largest U.S. dollar swap line is with the European Central Bank (ECB), at $143.7 billion. The ECB announced on March 18 that it will expand its asset purchases (which include corporate bonds) by another $820 billion.

The Swiss National Bank (central bank of Switzerland) has $10 billion of the Fed’s U.S. dollar swap lines. According to its most recent filing with the Securities and Exchange Commission for the period ending March 31, 2020, the Swiss National Bank holds $94.2 billion in stocks, including billions of dollars in U.S. tech stocks like Amazon, Alphabet (parent of Google), Facebook, and Microsoft.

Norges Bank (central bank of Norway) has $5.4 billion of the Fed’s U.S. dollar swap lines. According to its March 31, 2020 SEC filing, it has a stunning $280.6 billion in stocks but exactly which stocks it owns is such a super secret that the information table (like the one filed with transparency by the Swiss National Bank and linked in the above paragraph) is filed confidentially with the SEC.

If you think it is the job of the U.S. central bank, the Federal Reserve, to prop up the U.S. stock market, 85 percent of which is owned by the richest 10 percent of Americans, then you’ll be happy with this report. If not, please call your Senators and House Rep on Monday and demand investigations and hearings.

Also remember this, the Fed and foreign central banks were also working in collusion during the devastating financial crisis of 2007 to 2010. That didn’t prevent a dramatic wipeout in the stock market and U.S. economy. In fact, there are a growing number of Fed watchers who are rightfully questioning if this isn’t Part II of the last crisis – held off this long by debt-fueled spending and money creation out of thin air by the Fed and its foreign central bank collaborators.