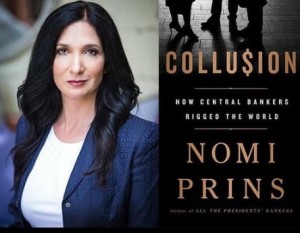 Tonight, at 7 p.m., Wall Street historian and author, Nomi Prins, will be speaking at The Strand bookstore at 828 Broadway in New York City. (See admission details here.) The appearance marks the launch of her latest book, Collusion: How Central Bankers Rigged the World, set for release tomorrow. While former FBI Director James Comey’s new book, A Higher Loyalty, has been getting lots of attention on cable news, Collusion is a far more important book. America can recover from a disastrous presidency, the topic of Comey’s book. But America might not be able to fully recover from another epic financial crash brought on by disastrous central bank policy – the subject of Prins’ book.

Collusion not only proves that the 1 percent got bailed out while the 99 percent got sold out as a result of policies of the U.S. Central Bank (the Fed) during and after the financial crash of 2008, but it makes the powerful argument that another epic financial crash is inevitable under the current mega bank structure which has turned the Federal Reserve into little more than a money pimp (our term) for the Wall Street casino.

Prins writes that “Eight years after the crisis began, the Big Six US banks – JPMorgan Chase, Citigroup, Wells Fargo, Bank of America, Goldman Sachs, and Morgan Stanley – collectively held 43 percent more deposits, 84 percent more assets, and triple the amount of cash they held before. The Fed has allowed the biggest banks on Wall Street to essentially double the risk that devastated the system in 2008.”

Prins refers to what the U.S. Fed and other major central banks like the Bank of Japan and European Central Bank are doing as “conjured” money. The money has been conjured or fabricated, writes Prins, because the Fed and its counterparts are allowed to electronically create money out of thin air. (The U.S. Federal Reserve actually has a video on YouTube explaining how it creates electronic money.)

The super cheap money that the Fed was conjuring and funneling to the mega banks had no strings attached. Prins writes that the largest Wall Street banks “that inhaled this cheap money were not required to increase their lending to the Main Street economy as a condition of the availability of that money…Wall Street used its easy access to cheap money to increase speculation in derivatives and other complex securities. They used it to buy back their own shares, thus effectively manipulating their own stock – in broad daylight and with explicit approval from the Fed.” Equally problematic writes Prins, “these banks dialed back their lending to small and midsized businesses, which hampered their growth potential.”

Prins compares the colluding central banks, led by the U.S. Fed, to a “financial world war,” writing that “Conjured money was the weapon of choice. Fabricated funds went toward subsidizing the private banking system and buying government debt, corporate debt, and stocks. By providing the grease that kept money flowing, central bankers superseded governments – they set the cost of money and provided the confidence in ongoing liquidity – the world was their battlefield.”

For its part in creating the most unstable financial structure in U.S. history, the Fed is absolutely shameless. Prins writes that “The Fed absolved itself of all responsibility for financial stability in the big bank landscape in June 2017 when it allowed thirty-four of the largest Wall Street banks, including the Big Six, to pass its stress tests. In turn, the banks took this opportunity to buy more of their own shares, elevating their stock prices rather than expanding their loan services for small businesses and Main Street customers.”

This maneuver by the Fed resulted in announcements that Wall Street banks planned “to buy back $92.8 billion of their own stock as a direct response to the Fed’s blessing,” notes Prins, effectively meaning that the Fed was “greenlighting legal manipulation of the stock market.” Indeed, says Prins, “The Dow soared.”

Ben Bernanke, Chairman of the Fed before, during and after the financial crash of 2008 deservedly doesn’t fare well in Prins’ book. The author writes that “Bernanke was such a master of collusion that he made it appear as if the colluders didn’t include him but were somehow acting completely independently of the Fed’s policies and implicit or explicit directives.” In another passage, Prins writes that Bernanke “was the consummate magician. He provided the illusion of competence in his orchestration of global monetary policy collusion – so long as no one looked behind the curtain.”

As a result of the colluding central banks and their unaccountable cheap money policies, Prins writes that global debt is now “equal to three times global GDP.” Her policy recommendations for untethering the stranglehold that the Fed has on America is to “implement actual oversight of the conjurers and dedicate effective channels through which to question and curtail their authority and actions.” Prins writes further that “Instead of financing speculative bubbles at the hands of the big private banks, central banks should finance large investment and recovery programs. We should break up the banks a la Glass-Steagall so that they can’t hold people’s deposits hostage during the next crisis.”