“The Fed has, effectively, become a hedge fund in drag as a central bank.” 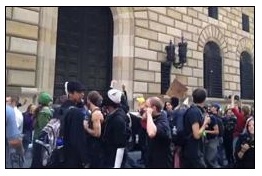 Occupy Wall Street Protesters Outside the New York Federal Reserve, September 17, 2012. The chant was: “Banks got bailed out, we got sold out.”

When the Fed published its weekly H.4.1 data last Thursday, there was no mention of its two, highly controversial, corporate bond buying programs: the Primary Market Corporate Credit Facility (PMCCF) and the Secondary Market Corporate Credit Facility (SMCCF). We sent an email to the New York Fed to find out if the two programs are operational and if they will be consolidated on the Fed’s balance sheet. A spokesman for the New York Fed replied that “the PMCCF and SMCCF are not yet operational. And, as we note on the websites for each, additional information will be published before the facilities are launched.”

That strikes us as strange. Last fall, the Fed launched a highly questionable repo loan program in as little as 24 hours and flooded Wall Street with hundreds of billions of dollars over the next few weeks. The two corporate bond buying programs were announced more than a month ago. What’s holding up their rollout? Is the Fed getting pushback that it’s not allowed to make direct purchases of corporate bonds, including those with junk ratings?

Gundlach is now squarely in the camp of Wall Street On Parade, except that we will go one step further. The Federal Reserve Act is more than a charter, it has been codified into law. And there is nothing in that law that indicates that the Fed is allowed to do more than make loans against collateral that is worthy enough to avoid losses to the American taxpayer. There is nothing in the law to suggest that the Fed is allowed to make purchases of anything, let alone junk bonds and junk bond ETFs.

In fact, the current law says this:

“Nothing in this chapter contained shall be construed to prohibit such notes, drafts, and bills of exchange, secured by staple agricultural products, or other goods, wares, or merchandise from being eligible for such discount, and the notes, drafts, and bills of exchange of factors issued as such making advances exclusively to producers of staple agricultural products in their raw state shall be eligible for such discount; but such definition shall not include notes, drafts, or bills covering merely investments or issued or drawn for the purpose of carrying or trading in stocks, bonds, or other investment securities, except bonds and notes of the Government of the United States. Notes, drafts, and bills admitted to discount under the terms of this paragraph must have a maturity at the time of discount of not more than ninety days, exclusive of grace.”

On April 6, former Fed Chair Janet Yellen appeared on CNBC and clearly indicated that it is her understanding that the Fed is restricted to buying government debt and agency debt that has government backing.

The Federal Reserve Act of 1913 got a makeover in the Dodd-Frank financial reform legislation of July 21, 2010, exactly one year before the Government Accountability Office released its audit of the Fed’s emergency loan programs that were conducted in secret from 2007 through at least the middle of 2010. Had Congress understood that the Fed had gone on an unaccountable $29 trillion binge to bail out Wall Street banks, it would have likely written much stronger legislation.

Notable changes to the Fed’s emergency lending authority that were contained in the Dodd-Frank legislation were the following:

Emergency funds had to be broad-based and “for the purpose of providing liquidity to the financial system, and not to aid a failing financial company”;

Loans had to be collateralized “sufficient to protect taxpayers from losses”;

Restricted the Fed from establishing “a program or facility that is structured to remove assets from the balance sheet of a single and specific company”;

Mandated that any Fed facility “be terminated in a timely and orderly fashion”;

Required the “prior approval of the Secretary of the Treasury” for any facility invoked by the Fed under its emergency lending authority.

The Fed’s wishful interpretation of the changes made in Dodd-Frank is that as long as the former foreclosure king, Treasury Secretary Steve Mnuchin, gives the green light for what the Fed is doing, then none of the other prohibitions apply. But that’s not how the law reads: not in the Dodd-Frank legislation or as codified into law. The law clearly indicates that all of the prohibitions apply and, on top of those, the U.S. Treasury Secretary must also give his approval.

In the updated Term Sheet (notably a phrase used by Wall Street investment banks) released by the Fed for its Primary Market Corporate Credit Facility, the Fed is going to attempt to triangulate the law using the following dodges: to get around the prohibition that it can only make loans, not purchases, it is going to make a loan to a Special Purpose Vehicle (SPV) and let that entity buy up the corporate bonds.

Further dodges of the law’s clear intent will be that the SPV will be allowed to “purchase qualifying bonds as the sole investor in a bond issuance.” How much could the SPV buy as the sole investor? A whopping amount. According to the Term Sheet, the SPV can buy from one issuer “130 percent of the issuer’s maximum outstanding bonds and loans on any day between March 22, 2019 and March 22, 2020.” That language strongly suggests that the Fed has one or more corporations in mind that are going to be shut out of regular bond issuance. This tactic would appear to be a clear contravention of Dodd-Frank’s mandate that the Fed only provide broad-based financial assistance “for the purpose of providing liquidity to the financial system….”

Instead of following Dodd-Frank’s requirement that loans have to be collateralized “sufficient to protect taxpayers from losses,” the SPV will be established with $50 billion of taxpayer money for the express purpose of absorbing the first $50 billion of losses in this gambit.

And to almost guarantee that there will be taxpayer losses in this SPV, junk bonds can be purchased as long as the bonds were rated investment grade as of March 22, 2020. Adding further risk for losses, the $50 billion from the taxpayer will be leveraged up to a range of 10 to 1 to 7 to 1.

The Fed has, effectively, become a hedge fund in drag as a central bank.

Gundlach and Wall Street On Parade are not the first to argue that the Fed has used its emergency lending authority in violation of the law. That argument was made brilliantly and in great detail by legal scholar Alexander Mehra and published in the University of Pennsylvania Journal of Business Law in 2011.