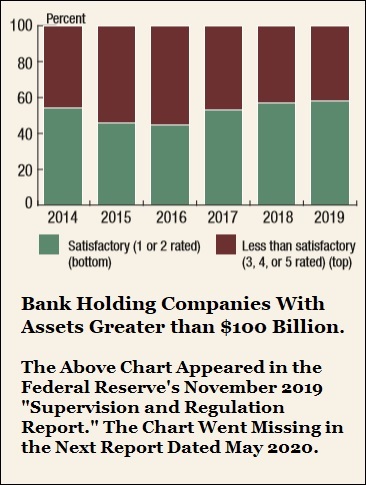 The chart above from the November 2019 Federal Reserve report on the condition of the biggest banks in the U.S. shows that almost half were rated unsatisfactory. There have not been any reports since that November report until the latest one from the Fed which was released last week and dated May 2020. The new report carries this headline: “The banking industry came into 2020 in a healthy financial position.” This is part of the Fed’s strategy to lay its abysmal failure to supervise the mega Wall Street banks at the door of the coronavirus pandemic.

It’s very easy today to get a totally bogus headline, one that is built completely on magical thinking, flashed across a TV screen in America. As the photo below illustrates, last Friday Steve Liesman of CNBC repeated this magical thinking from the Fed accompanied by a bold headline on the TV screen. Liesman, uncharacteristically, did not challenge this preposterous assertion by the Fed. 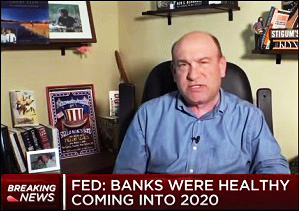 The facts on the ground are the following: beginning on September 17, 2019 – three months before the first coronavirus case was reported anywhere in the world – the liquidity at the biggest banks on Wall Street was so bad that the Fed had to intervene in the overnight loan market (repo loans) and begin making hundreds of billions of dollars in loans each week. This was the first time the Fed had to intervene in the repo loan market since the financial crash of 2007 to 2010.

By January 27, 2020, the Fed had pumped $6.6 trillion in cumulative emergency loans to the trading units of these giant Wall Street banks.  And the money kept flowing, reaching more than $9 trillion by March 14. (The repo loans are still flowing and the Fed has set up an alphabet soup roster of other emergency lending programs to bail out Wall Street’s biggest banks.)

On October 7 Wall Street On Parade reported the following, again, months before any outbreak of coronavirus anywhere in the world: Fed Says It Will Offer $310 Billion More in Term Loans to Wall Street as Over 68,000 Job Cuts Planned at Mega Banks.

On October 10, the President of the Federal Reserve Bank of Minneapolis, Neel Kashkari, gave an interview to Yahoo Finance in which he discussed the liquidity crisis at the big banks. Kashkari said this: (See video clip below.)

Kashkari is a Fed insider. In this October 10, 2019 interview he acknowledges the following: “banks found that they were short of liquidity” and that the banks had made some kind of “mistake” that created the liquidity crisis.

Notwithstanding that reality on the ground, the Federal Reserve’s May report carries this nonsensical statement about the banking industry: “The industry is characterized by better capital and liquidity planning and improved risk-management capabilities at banks of all sizes. As a result, the banking industry entered the current crisis well positioned to support continued lending.”

As for “improved risk-management capabilities,” consider this. JPMorgan Chase is the largest bank in the United States. Under the same Chairman and CEO, Jamie Dimon, the following has occurred: in 2012 the bank was forced to admit that it had allowed its traders in London to use customer deposits at its federally-insured bank in the U.S. to make wild bets in exotic derivatives and lose $6.2 billion of customer deposits. The FBI commenced an investigation but no criminal charges were filed. The bank paid over $1 billion in fines and settlements. In 2014 the bank pleaded guilty to two criminal felony counts for the way it handled the business bank account for Ponzi schemer Bernie Madoff. In 2015 the bank pleaded guilty to one more criminal felony count for its involvement in rigging foreign exchange rates.

Just last year, multiple traders at JPMorgan Chase were criminally charged by the U.S. Department of Justice with turning the precious metals desk at the bank into a racketeering enterprise. They were charged under the RICO statute, one that is typically reserved for charging members of organized crime. Bloomberg News has since reported that the bank itself is under a criminal investigation in that matter.

Despite this outrageous history, the Fed has allowed Dimon to remain at the helm of the bank and it has also allowed the bank to open more bank branches and balloon its assets. See JPMorgan Chase Has $2.9 Trillion Exposure in Off-Balance Sheet Items Vs $2.3 Trillion on Its Balance Sheet.