As Markets Plunged in March, Dark Pools Upped their Trading in JPMorgan’s Stock 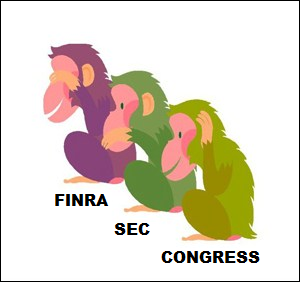 When the history books of this era are finally written, this will go down as a time when regulators allowed a no-law zone to be drawn around Wall Street. As the Federal Reserve Bank of New York is using taxpayer money to buy up junk bonds to shore up the sagging balance sheets of the behemoth banks on Wall Street and making ¼ of one percent interest loans to those banks against tanking stocks as collateral, those same Wall Street banks are trading their own bank’s stock in their own thinly-regulated internal stock exchanges known as Dark Pools.

It simply can’t get any crazier than this — and yet somehow it always does in this unprecedented era.

On June 2, 2014, to stem public outrage over claims of rigged markets, FINRA, the self-regulator and good buddy of Wall Street that conducts Wall Street’s private justice system, began to report publicly the three-week old trading data from the Dark Pools. But instead of providing daily reports with execution times for stock trades included, the data is lumped together for the entire week. That’s makes it a lot harder, if not impossible, to see if there is collusion happening by a banking cartel.

The week of March 16, 2020 was a brutal week for the stock market. The Dow Jones Industrial Average lost a total of 4,011.65 points in that 5-day trading period and a stunning 3,000 of those points came on Monday of that week.

We thought it would be informative to see what the Wall Street banks did in their Dark Pools that week when it came to the plunging price of JPMorgan Chase, which lost 19.6 percent of its stock value that week. Would JPMorgan Chase’s stock value have dropped by even more, had it not been for all those shares bought up by its Wall Street bank pals that week? You decide – because the Securities and Exchange Commission isn’t a bit interested. (See related articles below.)

As a benchmark, we looked at the trading of JPMorgan Chase in Dark Pools for an up-trending week, the week of February 3, 2020. For that week, Dark Pools traded 5,457,956 shares of JPMorgan Chase in a total of 32,581 trades. That compared to 16,086,587 shares traded by Dark Pools during the crash week of March 16, an increase of almost three times as many shares. The number of trades that occurred in the Dark Pools in JPMorgan Chase’s shares more than tripled to 113,019. (See charts below.)

During the up-trending week of February 3, JPMorgan Chase’s own  Dark Pools (it owns two) were the 4th and 10th most active Dark Pool trading its own stock. (Ask yourself why any Wall Street bank that has pleaded guilty to three criminal felony counts and is under a fourth criminal investigation for allowing its precious metals desk to turn into a racketeering enterprise should be allowed to own one Dark Pool, let alone two that could potentially create a two-sided market all by itself.) During the crash week, JPMorgan’s internal Dark Pool known as JPM-X ranked 8th in trading of its own shares.

Equally interesting, a Dark Pool called Level ATS that is jointly owned by Citigroup, Merrill Lynch (part of Bank of America), Credit Suisse and National Financial Services (according to its SEC filing) increased its trading in the shares of JPMorgan Chase to 1,086,781 in the crash week from a mere 216,896 in the up-trending week of February 3.

Following another era of unbridled greed and deregulation on Wall Street that ended in the stock market crash of 1929, the U.S. Senate Banking Committee conducted an extensive investigation from 1930 to 1934 into the trading structure and trading practices on Wall Street. The Senate investigations focused extensively on the corrupt operations of “Pools,” today reincarnated as Dark Pools. The Senate Banking Committee wrote the following:

“A pool, according to stock exchange officials, is an agreement between several people, usually more than three, to actively trade in a single security. The investigation has shown that the purpose of a pool generally is to raise the price of a security by concerted activity on the part of the pool members, and thereby to enable them to unload their holdings at a profit upon the public attracted by the activity or by information disseminated about the stock. Pool operations for such a purpose are incompatible with the maintenance of a free and uncontrolled market.”

The Senate Banking Committee of 1934 concluded as follows:

“The conclusion is inescapable that members of the organized exchanges who had a participation in or managed pools, while simultaneously acting as brokers for the general public, were representing irreconcilable interests and attempting to discharge conflicting functions. Yet the stock exchange authorities could perceive nothing unethical in this situation.”

Today, FINRA, the Securities and Exchange Commission, Congress, the Justice Department, and the hundreds of mainstream journalists who cover the Wall Street beat, remain eerily silent about the fact that Wall Street banks are trading in Dark Pools their own stock and that of other global banks with whom they are engaged in derivative trades as counterparties to each other.

As the 1929 crash proved, such manipulations never end well for the broader society. It took 25 years for the stock market to reach the peak it had set in 1929, not achieving that peak again until 1954. The 1929 stock market lost 90 percent of its value from peak to trough and unleashed the Great Depression.

Below are the statistics for the top 10 Dark Pools that did the largest amounts of trading in JPMorgan Chase’s stock for two radically different weeks in February and March of this year. 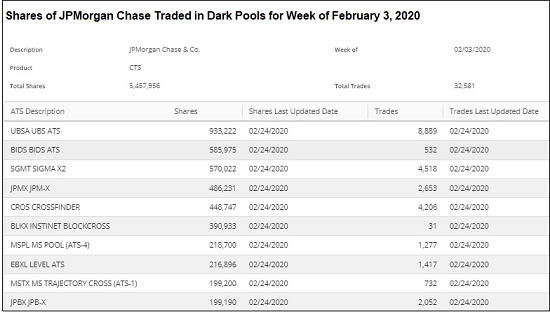 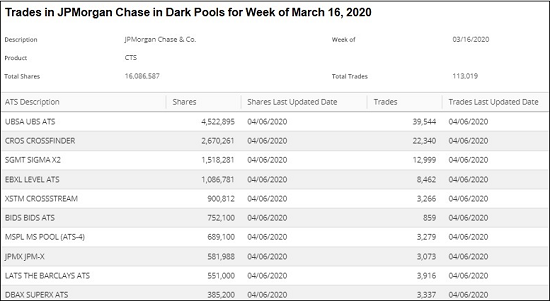 Should This Be Illegal – Banks Recommending a Stock to the Public then Secretly Trading It in their own Dark Pool?

Yes, America, a Banking Cartel Exists and Here’s the Proof