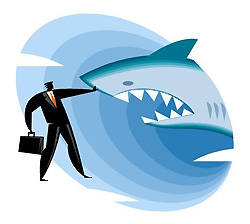 There’s no question that there’s a lot of sharks swimming about those dark pools being run by the mega Wall Street investment banks which are operating as privatized, unregulated stock exchanges operating in the dark. Any hopes that Wall Street’s captured regulators are going to harpoon those sharks anytime soon were dashed on July 1 when the Financial Industry Regulatory Authority (FINRA) announced a bizarre settlement with Goldman Sachs over misconduct by its dark pool, Sigma-X. The settlement popped up out of the blue three years after the alleged trading violations were documented by FINRA and the settlement was so devoid of facts as to create its own dark curtain around an already opaque arena.

As is typical, FINRA made the sweeping claim in its press release that “In today’s highly automated trading environment, FINRA has no tolerance for firms that fail to have robust policies and procedures to protect against trading through protected quotations.”

Based on the few details we could extract from the settlement document, FINRA has an enormous tolerance for dark pools that deny their customers a fair execution on their trade.

According to FINRA (which you should know is a self-regulatory agency with financial industry representation on its Board), its staff in Market Regulation conducted an investigation of Goldman Sachs’ dark pool, Sigma-X, from July 29, 2011 through August 9, 2011. Keep in mind that’s only eight trading days. The investigators found that the dark pool denied its customers a trading price equal to the National Best Bid and Offer (NBBO), which is what they are required to do under law, on 395,119 transactions.

FINRA does not tell us the most important detail about these transactions; how far off from the proper trading prices were these 395,119 trades? Are we talking about 5 cents or 50 cents or more than that? Neither does FINRA give us an idea as to what percentage of all trading done by Sigma-X in that eight-day period these improper trades represented.

FINRA has just in the past four weeks, apparently under pressure from the revelations in the Michael Lewis book, Flash Boys, begun to release the weekly volume of trading done in dark pools. For the most recent week reported, the week of June 16, Goldman Sachs shows 955, 636 transactions for the five-day week. Extrapolating that to an eight-day period would mean roughly 1.5 million transactions. While there is no currently available public data for total transactions in Goldman’s dark pool in 2011, if it was doing comparable trading to now, the 395,119 trades that were bad trades would represent more than a quarter of all trades. The public has a right to this information in order to put the conduct in proper context – and FINRA failed to provide it.

But the FINRA story gets worse. FINRA suggests that it has a strong basis for a prima facie case of long-term infractions. It tells us that “from at least November 1, 2008 through August 31, 2011” Goldman Sachs only spot-checked 20 orders per week to determine if they were in compliance with the National Best Bid and Offer. If it was conducting approximately 1 million trades a week, checking only 20 would be a preposterously useless sample.

Then FINRA tells us, in a footnote mind you without any context whatsoever, that it knows of two other dates when Sigma-X also failed to provide its customers with trades at the National Best Bid and Offer: 7,585 bad trades occurred on March 16, 2011 and 6,359 occurred on June 23, 2011.

What the public is missing here is the total of bad trades that occurred on all days from November 1, 2008 through August 31, 2011, a period that FINRA has thoroughly led us to believe was suspect for bad trades, and how much money in real terms this adds up to.

FINRA settled this matter on June 3, 2014 for a fine of $800,000 against Goldman Sachs. The public is not told why it took three years from FINRA documenting the 395,119 bad trades to fining Goldman Sachs and letting the public in on the bad behavior.

FINRA suggests that the low fine was influenced by Goldman Sachs “voluntarily” paying its ripped-off customers $1.67 million in restitution. But FINRA does not tell us when this occurred; if it occurred after FINRA discovered the wrongdoing; or how the monetary computation was made and by whom.

It is now July 2014. FINRA has known about these deficient monitoring policies by Goldman for three years. And yet, it is just now asking, as part of the settlement, for written acknowledgement that Goldman has put new monitoring procedures in place. Within 30 days, says the settlement, Goldman must provide a written representation “that the firm has revised its supervisory policies and procedures to address the deficiencies described” in the statement of settlement.

The settlement document is signed on behalf of Goldman Sachs Execution & Clearing by Kyle Czepiel, a Managing Director for the past 16 years at Goldman Sachs according to his LinkedIn profile. That profile also notes that he was previously a New York Stock Exchange examiner from 1994 to 1998 – strongly suggesting he should be conversant with what the law demands in the way of best execution.

According to the Bayou lawsuit (which was settled in arbitration for an award of $20.6 million against Goldman on behalf of Bayou’s creditors), not only was Goldman providing monthly profit and loss statements to Bayou showing tens of millions in losses, but the Goldman clearing unit was aware that Bayou was touting big returns because it had obtained Bayou’s marketing materials bragging of 18 percent positive returns since inception.  Bayou’s founder, Samuel Israel, is serving a 22-year prison sentence.

Despite this Goldman Sachs Execution & Clearing history with Bayou, the FINRA document states: “The firm has no relevant disciplinary history.”