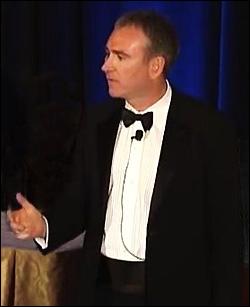 Ken Griffin, Owner of Hedge Fund Citadel, Giving a Speech at the Economic Club of Chicago in May, 2013

In response to a Freedom of Information Act (FOIA) request from Wall Street On Parade seeking information on how Citadel’s dark pool, Apogee, operates, the Securities and Exchange Commission responded in a letter dated August 12, 2014 that “we have determined to withhold records responsive to your request….”

Dark pools are the unregulated stock exchanges currently under scrutiny for potentially illegal market rigging activities. We were not asking for trade secrets or results of examinations. We simply wanted basic information on how the Apogee dark pool operates in the marketplace. Mary Jo White, Chair of the SEC, has promised greater transparency by her agency, and yet, this very basic level of information was denied.

Other dark pools like Liquidnet, Credit Suisse Crossfinder, and even the mighty Goldman Sachs’ dark pool, Sigma-X, have released their Form ATS describing the operations of their dark pools. What’s so secretive about how Citadel operates that it needs the SEC to run interference for it?

Citadel demands public scrutiny because it has been fined and/or sanctioned for market misconduct 26 times according to Financial Industry Regulatory Authority (FINRA) records. To put that number in perspective, if an individual broker had 26 violations on his public record he would have a very difficult time getting hired by a reputable firm. (Bad brokers with long histories of misconduct do sometimes get hired, unfortunately, because disciplinary records are expunged from the public record as part of settlement agreements.)

On June 25, 2014, Citadel Securities LLC, the owner of Apogee, was fined a total of $800,000 by its various regulators for serious trading misconduct. Citadel paid the fines in the typical manner, without admitting or denying the charges. This is what the New York Stock Exchange said Citadel had done:

In addition, according to the York Stock Exchange, Citadel “erroneously sold short, on a proprietary basis, 2.75 million shares of an entity causing the share price of the entity to fall by 77 percent during an eleven minute period.”

In another instance, according to the New York Stock Exchange, Citadel’s trading resulted in “an immediate increase in the price of the security of 132 percent.”

On January 9, 2014, the New York Stock Exchange charged Citadel Securities LLC with engaging in wash sales 502,243 times using its computer algorithms. A wash sale is where the buyer and the seller are the same entity and no change in beneficial ownership occurs. (Wash sales are illegal because they can manipulate stock prices up or down. They played a major role in the rigged stock market that crashed in 1929.) Citadel paid a $115,000 fine for these 502,243 violations and walked away.

As Wall Street On Parade reported on July 28 of this year, instead of cracking down on wash sales, Wall Street’s regulators have instead watered down the rules governing this virulent form of market manipulation.

Despite the seriousness of the market violations that Citadel has committed – 26 times – no prosecution has occurred and no one has gone to jail. But if you take something from Citadel, and are young employees lacking Citadel billionaire-owner Ken Griffin’s money to hire legions of top tier law firms, you will be hounded by relentless prosecutors and very likely end up with a long prison term. (See Appellate Court Finds Misconduct by SEC and U.S. Prosecutors in Squawk Box Case; Overturns Convictions)

According to this story at Bloomberg News, Sahil Uppal and Yihao Pu, both 26 years old, have been charged by the Justice Department in connection with the removal of computer code from Citadel. According to Bloomberg, Uppal faces 10 years in prison.

The case against Uppal and Pu is all the more interesting because theft of computer code charges were thrown out by a Federal appeals court in December 2010 in a case involving Sergey Aleynikov, a gifted former programmer at Goldman Sachs.

The Aleynikov prosecution was so egregious that bestselling author, Michael Lewis, covered the case in his book, Flash Boys, about the market manipulations of dark pools and high frequency traders. Aleynikov had been working for Goldman Sachs when he received an offer to move to a hedge fund and build a system from scratch.

That was 2009. Over the past five years, Aleynikov has been arrested and jailed by the U.S. Attorney’s office in Manhattan, had his conviction overturned by the Second Circuit Appeals Court, arrested again by the Manhattan District Attorney Cyrus Vance, and now faces more prosecution over the same set of facts: namely, that he took computer code that belonged to Goldman Sachs.

The case was so devoid of statutory support that on the very same day that Kevin Marino, Aleynikov’s lawyer, gave his oral arguments to the Appeals Court, “the judges ordered Serge released, on the grounds that the laws he stood accused of breaking did not actually apply to his case,” Lewis wrote. Aleynikov had already been in prison for a year.

The Second Circuit Appeals Court ruled that Aleynikov had neither taken a tangible good from Goldman nor had he stolen a product involved in interstate commerce – noting that at oral argument the government “was unable to identify a single product that affects interstate commerce.”