John Reed: How to Be Dead Wrong as a CEO and Still Get Super Rich 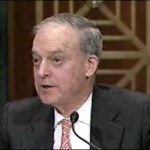 John Reed, former Co-Chairman and Co-CEO of Citigroup, Tells a Senate Banking Panel on February 4, 2010 That He Created “a Monster” With the Citigroup Merger

April 18, 2000 was the day John Reed retired from Citigroup, pushed out in a board room coup, leaving Sandy Weill the sole Chairman and CEO. In 1998, the two had, with great fanfare, merged the FDIC-insured Citibank with Salomon Smith Barney, an investment bank and brokerage firm, and insurance companies controlled by Travelers Group to create the global behemoth known as Citigroup. The pair had initially served as Co-Chairmen and Co-CEOs. At the time, the deal violated the Glass-Steagall Act, the Depression era law which barred firms primarily engaged with underwriting securities to affiliate with insured banks. The Bill Clinton administration would obligingly repeal the Glass-Steagall Act the year after the Citigroup merger.

Your tantalizing ride as a shareholder has also had plenty of thrills and chills you likely didn’t bargain for: like watching your stock trade at 99 cents after the 2008 financial crash when Citigroup became the recipient of the largest taxpayer bailout in U.S. history with $45 billion in equity infusions, over $300 billion in government asset guarantees, and over $2 trillion in cumulative, secret, below-market rate loans from the Federal Reserve from 2007 to 2010 to shore up Citigroup’s insolvent carcass.

Citigroup flopped because Sandy Weill and John Reed sold the dystopian banking model of a financial supermarket that would cross-sell all of its wares to savvy investors who would reap the rewards of one stop shopping. Instead, Citigroup fleeced the least sophisticated investor, built a black hole of off balance sheet debt, pumped and dumped toxic derivatives into the financial infrastructure and became the poster child of Wall Street greed, excess and regulatory failure.

So that’s how shareholders made out. How did Sandy Weill and John Reed make out? It is well known that Weill went on to become a billionaire on the backs of Citigroup shareholders. Much less has been written about Reed’s financial rewards for helping to create a financial Hindenburg.

In Monica Langley’s book, Tearing Down the Walls: How Sandy Weill Fought His Way to the Top of the Financial World. . .and Then Nearly Lost It All, the author reports that Reed owned 4.7 million shares of Citigroup on the date of his retirement in April 2000. Langley also notes: “Reed immediately began selling his Citigroup shares and laid plans with his second wife to buy a house on an island off the coast of France.”

If Reed sold all of his Citigroup shares over the next three months after his retirement at an average price at the time of $62, he would have realized $291 million. According to SEC filings (see here and here) Reed also received a $5 million retirement bonus and a retirement pension of at least $2,019,528 annually.

According to SEC filings, Reed was also to receive the following: lawsuit indemnifications arising from company employment; an office at Citigroup, secretarial support and access to a car and driver for as long as Reed deemed it “useful.” If Reed wanted an office outside of New York City, that would be provided with secretarial support until age 75.

Since the crash of 2008, Reed has repeatedly called for breaking up the mega banks and admitted that the Citigroup financial supermarket was a terrible idea. At a February 4, 2010 Senate Banking hearing, Reed told Senator Bob Corker that by creating a universal banking model at Citigroup, he and Weill had “created a monster.” The exchange went like this:

Senator Bob Corker: “…you were Chairman of Citigroup when all of this was put together…I wonder if guys like you and others laugh at us when we say that we want to create a regime that absolutely ends forever in the American vocabulary that any company is too big to fail…”

John Reed: “…There’s no question that when we put Travelers and Citi together we created a monster. And most of the difficulties we’ve had have stemmed from the Salomon Brothers side.”

On March 16, 2012, Reed appeared on the Bill Moyers’ program and provided insight into the real motivation behind the creation of Citigroup:

John Reed: “Sandy Weill. I mean, his whole life was to accumulate money. And he said, ‘John, we could be so rich.’ Being rich never crossed my mind as an objective value. I almost was embarrassed that somebody would say out loud. It might be happening but you wouldn’t want to say it.

“But you know, the biggest bonus I had ever received when I was at Citi was three million dollars. The first year I worked with Sandy it was 15 [$15 million]. I said to the board, ‘I’m the same guy doing the same job, same company. There are two of us. The company’s bigger but there’re two of us. What’s going on?’ ‘Oh, you don’t understand.’ And it was just totally different culture. And see, Wall Street developed that culture.”

Just two weeks ago, Reed was back at his serial public pronouncements in an OpEd at the Financial Times titled: “We Were Wrong About Universal Banking.” Reed said the idea behind Citigroup got two basic concepts wrong. Reed writes:

“One was the belief that combining all types of finance into one institution would drive costs down — and the larger the institution the more efficient it would be. We now know that there are very few cost efficiencies that come from the merger of functions — indeed, there may be none at all. It is possible that combining so much in a single bank makes services more expensive than if they were instead offered by smaller, specialised players.

“The second thing we were wrong about has to do with culture — and this turns out to be very serious. Mixing incompatible cultures is a problem all by itself. It makes the entire finance industry more fragile. This is what I mean by an unstable cultural balancing act at the core of universal banking and, the restructurings and management changes we are now seeing in European financial institutions.”

But Weill was right about one thing: both he and Reed became “so rich.”

There is another very troubling aspect about the narrative surrounding Reed’s serial media confessionals. Reed fails to adequately portray just how far back he was pushing Congress to repeal the Glass-Steagall Act. In fact, almost a decade prior to Reed teaming up with Sandy Weill, he was bullying Congress to house Wall Street firms under the same roof with insured, deposit-taking banks.

In prepared remarks before the Senate Banking Committee on July 13, 1989 – nine years before the Citigroup merger – John Reed ridiculed Congress for not allowing the kinds of mergers happening in Europe:

“Organizations and strategic alliances such as these, which have at their core a commercial bank, a fully integrated investment bank/securities operation, and an insurance company, can be expected to dominate global capital markets as the 21st century gets underway. In sum, the global competitive environment is changing rapidly. But while much of the developed world is busy laying the foundation for a financial system for the next century, the U.S. financial system is anchored firmly in the past. It is frankly appalling that European nations will have removed virtually all geographic and product-line barriers affecting financial services by 1992, while our system remains balkanized.”

Even more striking, Reed told the same Senate panel in 1989:

“As for the activities and affiliations of depository institutions, the Bank Holding company Act and the Glass-Steagall Act can only be characterized as protectionist if not in intent, at least in their consequences. Financial institutions perform a limited number of common functions — they process transactions, serve as intermediaries, manage information, give advice and trade assets. That is why the common sense benefits from combining services are potentially so large. Yet current laws compartmentalize financial services in ways that are increasingly anachronistic. They are a source of risk and inefficiency.”

While Reed’s two points in the Financial Times about a culture clash and lack of economies of scale are real, they are hardly the core reason to break up the biggest Wall Street banks. The reason the Glass-Steagall Act was enacted in 1933 was to stop Wall Street casinos from using depositors’ life savings to speculate in stocks and risky trading strategies. The Glass-Steagall Act not only separated Wall Street firms from deposit-taking institutions but it created insurance on deposits at the banks, what would become the Federal Deposit Insurance Corporation or FDIC.

Today, the biggest Wall Street banks are once again using those taxpayer backstopped deposits to place high risk gambles in stock trading and derivatives. It’s heads we win, tails you lose. If the gambles work out, bank managers reward themselves with millions in bonuses. If the bank fails from the gambles, the Federal Reserve has emergency lending authority and can secretly stuff more trillions in cut-rate loans into the failing bank. Seven years after the greatest financial crash since the Great Depression, nothing has materially changed in reining in the high risks being taken with insured deposits.

JPMorgan Chase’s infamous London Whale fiasco in 2012, where London traders were placing massive derivative bets, resulted in at least $6.2 billion in losses. JPMorgan Chase was not trading with its own capital, it was making these high risk bets with deposits in its FDIC insured bank.

The longer this preposterous and dangerous banking model remains in force, the more inevitable the next epic financial crash becomes.