The Dickensian Tale of the WeWork IPO 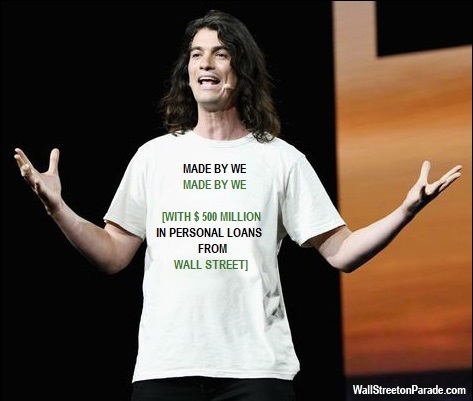 The WeWork IPO is hype wrapped in subterfuge. It’s a money-losing commercial real estate company attempting to pass itself off as the Dalai Lama of office space rentals. The company has never made a dime of profits and its losses spiraled to $900 million in the first half of this year.

Here’s a sample of the spin from its IPO prospectus:

“We provide our members with flexible access to beautiful spaces, a culture of inclusivity and the energy of an inspired community, all connected by our extensive technology infrastructure. We believe our company has the power to elevate how people work, live and grow.”

“We believe that individuals are more productive when they are able to express their full and authentic selves, so we aspire to be as inclusive as possible.”

We’re going to have to strike out the “culture of inclusivity” because the Board of Directors of WeWork has no women and no blacks among its ranks. We’re also going to have to excise “the extensive technology infrastructure” because what they’re really talking about is not Silicon Valley breakthrough technology but jazzing up drab offices with beer taps, microbrewed coffee, fruit-infused water and WiFi – the latter of which you can get for free in any Panera’s, along with a table and chair, for the price of a cup of herbal tea.

We also don’t think WeWork believes that the “company has the power to elevate how people work, live and grow” because it says its very survival is in serious doubt: “We have a history of losses and, especially if we continue to grow at an accelerated rate, we may be unable to achieve profitability at a company level (as determined in accordance with GAAP) for the foreseeable future.” (This sentence was italicized in the prospectus.)

Lots of little shell companies go public in the U.S. with dodgy financials and crony management structures. But WeWork’s IPO is hoping to be the second largest IPO of the year, with an eye toward raising $3.5 billion. The deal is being led by two of the most powerful Wall Street banks, JPMorgan and Goldman Sachs. WeWork is being represented in the IPO by one of the most sophisticated law firms in America: Skadden Arps, Slate, Meagher & Flom. The Wall Street bank underwriters are being represented by another sophisticated law firm, Simpson, Thacher & Bartlett. So you really have to wonder how all of the conflicts with the Chairman and CEO of WeWork, Adam Neumann, passed the smell test with all these legal eagles supposedly dotting the i’s and crossing the t’s.

Here’s a small sampling: while Neumann’s loyalties as Chairman and CEO of WeWork were owed to the company under the past century of corporate law, he was allowed to run around buying up commercial real estate on his own behalf and then leasing it back to WeWork. According to the prospectus, WeWork currently leases four properties from Neumann on which is owed “future undiscounted minimum lease payments” of “approximately $236.6 million….”

However, in addition to those four properties, Neumann owns another six properties which WeWork may decide to buy from him according to the prospectus. But don’t worry because those potential purchases will be “subject to the review and approval” of the all-male Board of Directors. Unfortunately, Neumann has the right to overrule the Board of Directors according to this little missive in the prospectus:

Neumann, now 40 years old, was formerly a member of the Israeli military who previously lived in a Kibbutz. Where did he get all of this money to buy up 10 commercial buildings? Through the generosity of the very same Wall Street banks that are the underwriters of this IPO. According to the prospectus, JPMorgan Chase Bank, UBS, and Credit Suisse gave Neumann a $500 million credit line, of which he has used $380 million. In addition, JPMorgan Chase Bank “has made loans and extended credit” to Neumann “totaling $97.5 million across a variety of lending products, including mortgages secured by personal property and unsecured credit lines and letters of credit.”

Speaking of personal property, Neumann and his wife, Rebekah (the brand manager for the company) own five homes for which they plunked down $80 million. The eye-popping prices the couple paid for their digs suggest naked materialism, which doesn’t seem to comport with the aura of their public relations campaign. Rebekah Neumann’s profile on their web site says she has “studied Buddhism at Cornell University” and “traveled the world apprenticing and studying under many Master Students, such as His Holiness the Dalai Lama and Mother Nature herself, and is committed to creating an educational community that fosters growth in humans’ minds, bodies, and souls elevating the collective consciousness of the world.”

Apparently, the Neumanns believe all of that communing with the collective soul needs to be done behind cloistered walls separating the 1 percent from society’s riff raff – in five opulent homes to be exact: two in Manhattan; one in the tony Hamptons at the East End of Long Island; a country estate in Westchester, New York; and a $22 million estate in the Bay Area of San Francisco that was newly added to their personal lifestyle choices just last year.

The country estate in Westchester may provide the canary in the coal mine for how this IPO is going to pan out eventually. 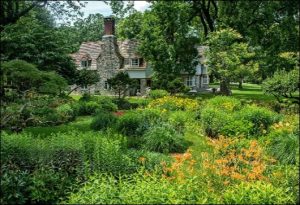 Adam and Rebekah Neumann Purchased the Linden Farm in Pound Ridge, New York in 2016 for $15 Million; It’s Now Worth Half That

In 2016, the Neumanns paid $15 million for a 60-acre estate in Pound Ridge (Westchester) New York, complete with an 18-room stone mansion, riding ring, stables, tennis courts and gardens. According to Zillow, that property is now only worth $7.6 million. Realtor.com puts the value at $5.4 million while Trulia suggests it’s in the $8 million range. Taking the average, that would put the loss at about 53 percent.

If WeWork IPO investors are hoping to cash in on Neumann’s skill at picking up undervalued commercial real estate and making it productive, this may be a sorely needed cautionary tale.

Here’s where the Neumanns likely went wrong on the Westchester property. The elegant brochure that marketed the property highlighted the pedigreed history and snob appeal of the estate. But thumb through the brochure pages and you see a mansion built between 1927 and 1929 that is in serious need of a new roof and major updating. Then there is this notable obfuscation: the brochure indicates that the home has 6 full bathrooms and 2 partial baths. But not one of the 8 bathrooms is pictured. The kitchen is also not pictured – a critical consideration for any homebuyer. The lack of photos of baths and kitchen suggest these are not photo worthy and you might as well do a teardown and rebuild. This is likely why the $15 million the Neumanns paid has been devalued by half in three years.

The flawed thought process that went into buying the country estate has a corollary in the business model of WeWork. The company has $47 billion in long-term commercial leases while the majority of its rental tenants hold short-term leases and those tenants consist, to a significant degree, of freelancers and startups that could go belly up in the next recession or find it financially necessary to work out of their own homes.

And, finally, there is this interesting tidbit from the prospectus. The “We” people may be putting the screws to the “wee” people.

Unite HERE is a large union whose members work in low-wage industries like hotel, restaurants, laundry and warehouse. These union members are lucky to own one home let alone five. JPMorgan is the investment advisor for one of Unite HERE’s pension funds and it has put WeWork stock in the fund. It doesn’t get any more Dickensian than that.