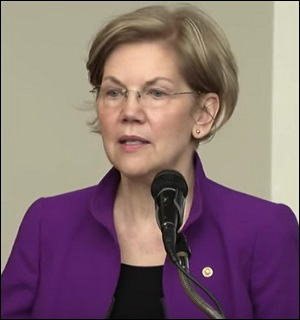 On May 6 of this year, Wall Street On Parade predicted that Senator Elizabeth Warren, now rising rapidly in her bid for President, would be targeted by Wall Street in an effort to derail her campaign. Yesterday, that Wall Street campaign officially began. CNBC’s Jim Cramer and David Faber discussed on TV how they are hearing from Wall Street bank executives that Warren must be stopped.

On the same day, September 10, 2019, Bloomberg News, which is majority owned by billionaire Michael Bloomberg, whose $52.4 billion net worth derives from leasing his data terminals to thousands of Wall Street trading floors around the globe, ran this headline: “Richest Could Lose Hundreds of Billions Under Warren’s Wealth Tax.” Obviously, that wouldn’t sit too well with Michael Bloomberg, who has frequently penned his own OpEds for his financial news empire.

The opinion piece was titled “Warren’s Assault on Retiree Wealth,” and was written by Phil Gramm and Mike Solon. Gramm is the former Republican Senator whose name appears on the Gramm-Leach-Bliley Act, the legislation that repealed the Glass-Steagall Act. It was that repeal that allowed Wall Street’s casino investment banks to merge with commercial banks holding Federally-insured deposits. And it was this dangerous combo that led to the epic crash on Wall Street in 2008 and the ensuing economic collapse in the U.S. – the greatest collapse since the Great Depression.

Gramm was not only a registered lobbyist for the global investment bank, UBS, but he formed his own lobbying firm, Gramm Partners.

Gramm’s wife is Wendy Lee Gramm, the former Chair of the Commodity Futures Trading Commission (CFTC) from 1988 to January 1993, who gave Wall Street exactly what it wanted in leaving its dangerous derivative contracts free from Federal regulation until the crash.

According to a report from Public Citizen:

“In 1992, as the first step in its business plan to profit on the speculation of energy, Enron petitioned the CFTC to make regulatory changes that would limit the scope of the commission’s authority over certain kinds of futures contracts.  Immediately before leaving the CFTC, Gramm muscled through approval of an unusual draft regulation that would do just that – it narrowed the definition of futures contracts and excluded Enron’s energy future contracts and swaps from regulatory oversight.  Although her actions were criticized by government officials who feared the change would have severe negative consequences (as, in fact, it did), Gramm was rewarded five weeks after she left the CFTC with a lucrative appointment to Enron’s Board of Directors.  Between 1993 and 2001, when the company declared bankruptcy, Enron paid Gramm between $915,000 and $1.85 million in salary, attendance fees, stock option sales, and dividends.”

Enron was also a major campaign donor to Wendy Lee Gramm’s husband, Phil Gramm, while he served in the U.S. Senate.

Michael Solon, the co-author of the piece in yesterday’s Wall Street Journal, worked for Gramm in the U.S. Senate for 14 years. According to Solon’s current LinkedIn profile, he was a principal in the lobbying firm, Capitol Legistics (yes, that’s the correct spelling) whose corporate clients include the powerful Wall Street firm, Blackstone, and the powerful Wall Street law firm, Akin-Gump. Solon’s LinkedIn profile also shows him presently working for another lobbying firm, US Policy Strategies, whose largest client for the past five years has been Goldman Sachs, which has ponied up $1.685 million bucks to the lobbying firm.

Solon’s name and signature appear on the lobbying reports for Goldman Sachs. One of those reports, filed for the first quarter of last year, show that Goldman paid Solon’s firm $120,000 for lobbying activities in the quarter. One piece of legislation on which Solon lobbied was H.R.4790, the Volcker Rule Regulatory Harmonization Act. Last month, the Volcker Rule, part of the Dodd-Frank financial reform legislation of 2010, which was to prevent Wall Street banks from using depositors’ money to trade for the house, and from owning their own hedge funds and private equity funds, was gutted by Federal regulators.

The Wall Street Journal piece by Gramm and Solon attempts to spread panic that Warren’s zeal to hold Wall Street accountable will hobble retirees’ wealth in the stock market. It fails to mention that 80 percent of stock market wealth is owned by the top 10 percent of the richest Americans.

When an American newspaper runs an unbridled piece of corporate propaganda like this and fails to mention one syllable about the corporate lobbying work of the authors, it needs to be called out for it by engaged Americans. We encourage our readers to make good use of their Twitter accounts in doing so.

Is the Wall Street Journal Part of the Culture Problem on Wall Street?

Wall Street Journal: Wealth Inequality Is Your Own Dumb Fault