Goldman Sachs and JPMorgan Have Flagrantly Flaunted the Volcker Rule for Nine Years: Now It’s to Be Gutted by Federal Regulators 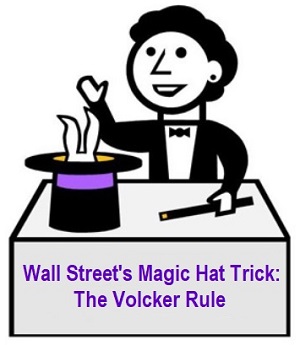 Two of Wall Street’s crony regulators announced today that they are going to “simplify” the Volcker Rule’s ban on proprietary trading at Wall Street banks, providing another big win for Wall Street and another big nightmare for Main Street.

The financial crash on Wall Street in 2008 was the deepest economic upheaval in the U.S. since the Great Depression. Millions of honest, hardworking Americans lost their jobs, and then their homes, as a result of the economic collapse. Many of these Americans have yet to fully recover financially after more than a decade has passed.

The promise of the Obama administration was that its Dodd-Frank Wall Street Reform and Consumer Protection Act that was signed into law in 2010 would put an end to the reckless gambling casino on Wall Street that had brought on the collapse.

One of the key reforms of the Act was Section 619, commonly known as the Volcker Rule after former Federal Reserve Chairman, Paul Volcker, who headed President Obama’s Economic Recovery Advisory Board. Volcker correctly believed that the proprietary trading (making bets for the house) of the Wall Street banks dramatically deepened the financial crisis and forced the U.S. taxpayer and the Federal Reserve to bail them out with astronomical sums of money.

The Volcker Rule was meant to serve as a substitute for full restoration of the Glass-Steagall Act of 1933 which made it illegal for banks holding Federally-insured deposits to also speculate in stocks or own stock trading firms. The Glass-Steagall Act kept the U.S. financial system safe for 66 years until its repeal in 1999 under the Wall Street-friendly Clinton administration. It took just nine years after the repeal of the Glass-Steagall Act for Wall Street to blow itself up in a replay of 1929. Going into the crisis of 2008, the biggest speculating investment banks on Wall Street had merged with the largest Federally-insured commercial banks in the U.S. – a clear recipe for disaster which remains as dangerous today as it was in 2008.

Volcker’s assessment of how dangerous the commercial bank/investment bank model had become was borne out by the findings of the Financial Crisis Inquiry Commission’s official report and dozens of other research findings. Just last year the nonprofit, Americans for Financial Reform, assessed the situation like this:

“…two of largest U.S. depository banks at the time of the crisis – Bank of America and Citibank – lost about half of their tangible equity capital to trading losses in 2008…Citibank and Bank of America/Merrill Lynch were perhaps the most systemically critical U.S. institutions suffering immense financial crisis losses tied to trading activities, but they were hardly alone. Foreign banking organizations vital to Wall Street stability, such as Deutsche Bank, UBS, and Credit Suisse, also suffered enormous trading losses. And some investment banks such as Goldman Sachs that avoided extreme trading losses managed to do so by imposing those losses on others, using deceptive practices to sell impaired assets to clients. The incentive to take advantage of clients in this way was driven by the conflict of interest created by bank proprietary trading, since banks sought to avoid proprietary losses in their trading inventories by deceiving investors into purchasing bad assets.”

Section 619 of Dodd-Frank, the Volcker Rule, could not have been clearer in its intent. It read at the time of signing:

“The Bank Holding Company Act of 1956 (12 U.S.C. 1841 et seq.) is amended by adding at the end the following: Unless otherwise provided in this section, a banking entity shall not—(A) engage in proprietary trading; or (B) acquire or retain any equity, partnership, or other ownership interest in or sponsor a hedge fund or a private equity fund.”

But the big Wall Street banks had no intention of ever letting the Volcker Rule be implemented. Dodd-Frank was signed into law on July 21, 2010 but Federal regulators did not provide their interpretation on how the rule should be implemented until December 2013, indicating at that time that Wall Street had until July 21, 2015 to fully implement the rule. Then the Federal Reserve granted banks an extension until July 21, 2017 to bring their hedge funds and private equity funds into compliance.

We know that some of these hedge fund assets are in internal JPMorgan Chase hedge funds because in December of 2015, the Securities and Exchange Commission fined the bank $267 million for failure to disclose conflicts of interests in placing client monies in their own mutual funds and their own “proprietary hedge funds.” Also, in June of this year, Reuters reported that JPMorgan was converting its $2 billion Highbridge multi-strategy hedge fund into a credit-focused fund.

Additionally, CNBC reported in February that Goldman has created a “secret portfolio” called a “hedge fund ‘very important position’ basket” that “contains the 50 stocks that appear most often on the top 10 holdings of fundamentally-driven hedge funds, according to the firm.” If it’s an internal offering that’s tracking hedge funds, it certainly sounds like an internal hedge fund offering from Goldman Sachs.

This is how Wall Street has been operating for far too long. It does what it wants in contravention of the law, then demands that Congress or its regulators change the law. That’s precisely how the Glass-Steagall Act was repealed. Wall Street honcho Sandy Weill announced the merger of his insurance/brokerage firm, Travelers Group, with Citicorp, which owned the commercial bank, Citibank, in 1998. The merger was illegal under the six-decade old Glass-Steagall Act. But the Clinton administration, after much ill-advised praise for the merger from the Editorial Board of the New York Times, repealed the Glass-Steagall Act the following year to accommodate the illegal merger.

Every American needs to become engaged on this issue. The alternative is another epic crash on Wall Street that tanks the U.S. economy and leaves millions of Americans with job losses — once again.