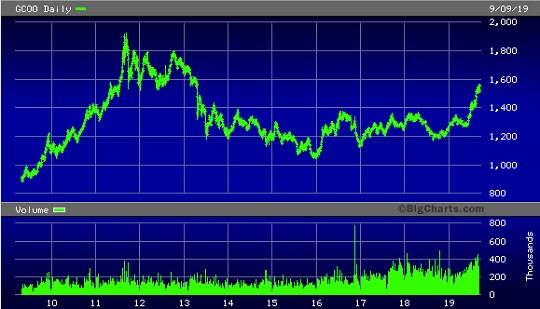 Citigroup released an analyst’s note yesterday stating that “We expect spot gold prices to trade stronger for longer, possibly breaching $2,000 an ounce and posting new cyclical highs at some point in the next year or two.”

Is Citigroup simply talking its book when it comes to gold? If so, it wouldn’t be the first time. The bank played a central role in the analyst research scandals of the dot.com era when its analyst, Jack Grubman, was touting stocks to investors while calling them “pigs” internally.

Citigroup is a major dealer in gold and other precious metals. Risk.net named Citgroup “metals house of the year” in 2017, mentioning a transaction that “involved working with a Russian bank to hedge two million ounces of gold out to five years. It was executed on behalf of a Russian gold producer to hedge part of its production on a long-term basis.”

In March of this year, Reuters reported that Citigroup was planning to unload several tons of gold involved in a $1.6 billion loan with Venezuela after the country failed to meet a $1.1 billion loan repayment on March 11.

Gold’s meteoric rise began in early 2009 following the prior year’s collapse of major financial institutions like Bear Stearns, Lehman Brothers, AIG, Fannie Mae, Freddie Mac, and the unprecedent bailout of Citigroup, without which it would have undoubtedly collapsed. In 2011, the year that gold flew through historic milestones, the Government Accountability Office (GAO) released a stunning report showing that the Federal Reserve had secretly funneled over $16 trillion in revolving loans to prop up Wall Street banks and their foreign counterparties. Later in 2011, Levy Economics Institute released its own report, filling in the holes left by the GAO report. Their tally of the Federal Reserve loans came to $29 trillion.

The epic Wall Street collapse in 2008, the greatest since the Great Depression of the 1930s, combined with the unprecedented and secret actions by the unaccountable Federal Reserve – which created the money for its loans out of thin air by pushing an electronic button, undermined confidence in the stability of the U.S. financial system.

Citigroup played a major role in undermining that confidence. It was one of the country’s largest banks by assets and this is what it took to prop it back up: a government guarantee on over $300 billion of its assets; a $45 billion government equity capital infusion; the Federal Deposit Insurance Corporation guaranteeing $5.75 billion of Citigroup’s senior unsecured debt and $26 billion of its commercial paper and interbank deposits; and a secret $2.5 trillion in revolving loans from the Federal Reserve that lasted from December 2007 through at least July 2010.

How ironic that Citigroup is now touting another meteoric rise in the price of gold. Does it see something on the horizon to suggest another epic implosion on Wall Street?