Nomi Prins’ New Book: “No One Wanted to Call the Fed’s QE a Ponzi Scheme. But It Was.” 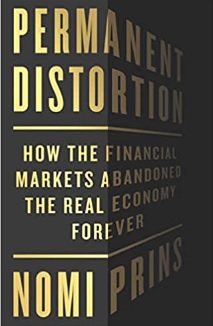 Wall Street veteran Nomi Prins’ new book is being released today with a title that should give every member of the Senate Banking and House Financial Services Committees pause: Permanent Distortion: How the Financial Markets Abandoned the Real Economy Forever. The book does what neither of these Committees has done for the American people. It explains how the financial crash of 2008 unleashed an unbridled and unaccountable Fed as Wall Street’s permanent sugar daddy, distorting market functioning with its perpetual money spigot to the point that markets no longer function as a pricing mechanism or efficient allocator of capital but more along the lines of a Ponzi scheme for the rich. Prins writes:

“Once central banks unleashed monetary policy to accommodate mega-banks, subsidize Wall Street financiers, and bolster global markets, the very idea of free and open markets and laissez-faire investing died. The threat of raising rates or ceasing to buy bonds could catalyze panic, instability, and chaos—so the threat was never issued. No one wanted to call the Fed’s QE a Ponzi scheme. But it was.”

The disparity between the Fed’s money spigot to shore up Wall Street versus the real economy is succinctly captured by Prins as follows:

“The amount of money created to buy securities under its ‘no-limit’ policy over the course of just a few months was staggering. On June 18, 2020, the Fed reported that the size of its book had expanded to $7.1 trillion…It was also nearly double the level it had been one year earlier. It was 60% greater than it had been at the height of the post-financial-crisis period. All that newly manufactured money turbo-boosted the stock market. This trading frenzy among institutional investors and a growing group of retail investors led Wall Street banks to smash earnings records in the third quarter of 2020. This was in stark contrast to abysmal unemployment figures still weighing on Main Street. It was incongruent with the fact that during 2020 the number of US corporate bankruptcies hit their highest level since 2009, with 630 filings…” 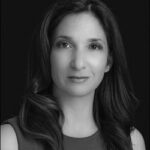 The timing of the release of Prins’ book could not be more appropriate as signs mount of how entrenched corruption has distorted the world in which we live to the point that it increasingly feels like a bad sci-fi movie. The man who first hooked up the feeding tube from the Fed to the grifters on Wall Street, former Fed Chairman Ben Bernanke, just yesterday received a Nobel Prize in economics. The former President of the United States, Donald Trump, who hammered the current Fed Chairman, Jerome Powell, with demands to keep the punch bowl flowing, is under criminal investigation for stealing Top Secret government documents. The New York Fed has set up a second trading floor in Chicago near the S&P 500 futures market with not one member of the U.S. Congress curious as to why the New York Fed should have even one trading floor. And a year-long investigation of Fed officials for potentially engaging in insider trading continues.

Prins brilliantly captures the insanity and mass hypnosis of regulators who have taken a hands-off approach to the Fed’s unlimited money spigot to the mega banks on Wall Street with indisputable facts and figures. She builds her case against the monetary policies of Bernanke and his successors (Janet Yellen and Jerome Powell) in the artful way that a master mason builds an exquisite rock wall — one carefully placed stone at a time. Prins writes:

“By 2019, the total of assets held by the G3 central banks—the Federal Reserve, the European Central Bank, and the Bank of Japan—hit $13.5 trillion. Concurrently, the global debt-to-GDP ratio had risen to 322%. That meant it took $3.22 of debt to support every $1 of economic growth…

“One major reason people’s economic conditions weren’t keeping pace with the rise in stock market levels was that many weren’t involved in the market at all. They lived in the real world, not the paper one. In 2019, the top 10% of Americans controlled more than 84% of the value of financial accounts holding stocks.”

Prins also demonstrates how the Fed’s policies have exacerbated wealth inequality around the world:

“Whether it was done to soothe a stock market crash, a ruptured subprime housing market bubble, or a pandemic, the Fed’s response to the financial crisis of 2008 and later crises has confirmed that it will always seek a way to grease the wheels of capitalism for its wealthiest participants and private banks. The results speak for themselves. According to a 2022 Oxfam International report:

‘The world’s ten richest men more than doubled their fortunes from $700 billion to $1.5 trillion—at a rate of $15,000 per second or $1.3 billion a day—during the first two years of a pandemic that has seen the incomes of 99 percent of humanity fall and over 160 million more people forced into poverty.’”

Prins’ book appears to have gone to the printers before raging inflation forced the Fed to make a rapid series of large increases in its benchmark interest rate this year, effectively smashing its easy money punchbowl to smithereens. The Fed has now raised its Fed Funds rate by 75 basis points (three-quarters of a point) three times in a row this year, following a 25-basis point hike in March and a 50-basis point increase in May. But Prins does express a strong view of what she felt was going to happen should the Fed be forced to reverse its easy money policies. She writes:

“If cheap money strategies are ever truly reversed (as opposed to simply adjusted tighter in relatively small increments) or pervasive inflation skyrockets for too long, the cost of repaying that debt for governments and corporations becomes a massive challenge. A significant policy shift could lead to seismic international debt defaults.”

The markets are now writing a new opening chapter for Prins’ next book. Recent headlines at Wall Street On Parade provide a sneak peek at what that chapter will look like:

Nowhere to Hide: The Fed-Induced Bubble in Stocks and Bonds Is Blowing Up; Even the Typical Safe Havens of Gold and T-Notes Are Losing Money

New Study: Wall Street Banks Are Doubling Down on Risk by Selling Credit Default Swaps on their Risky Derivatives Counterparties

As we have repeatedly written, there is still time to save the financial future of the United States. The first step is for Congress to immediately restore the Glass-Steagall Act, thus separating the trading casinos on Wall Street from the nation’s federally-insured commercial banks that are supposed to finance the real economy, not Wall Street speculation. The second step is for Congress to pass serious campaign finance reform to return representative government to the American people instead of Wall Street, the one percent and corporate PACs.