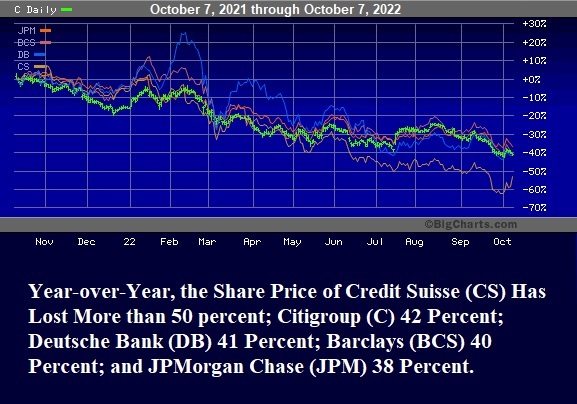 At Fed Chairman Jerome Powell’s last press conference on September 21 he said that there is “good reason to think that this will continue to be a reasonably strong economy.” Unfortunately, the U.S. can’t have a strong economy without strong banks willing and able to lend. And there are serious storm fronts in that area that the Fed Chair and mainstream media are choosing to ignore.

Last week multiple news outlets raised the question as to whether the troubles at Credit Suisse signaled another “Lehman moment.” (See here, here, and here, for example.) A “Lehman moment” refers to the former 158-year old Wall Street investment bank, Lehman Brothers, collapsing into bankruptcy on September 15, 2008 during a widening financial crisis on Wall Street. Because Lehman was the only major Wall Street firm that the Fed allowed to collapse into bankruptcy (rather than orchestrating a bailout), it has been mistakenly viewed all these years as the catalyst for the carnage that followed. As we will explain shortly, that role rightfully belongs to Citigroup.

According to documents released by the Financial Crisis Inquiry Commission (FCIC), at the time of Lehman Brothers’ bankruptcy it had more than 900,000 derivative contracts outstanding and had used the largest banks on Wall Street as its counterparties to many of these trades. The FCIC data shows that Lehman had more than 53,000 derivative contracts with JPMorgan Chase; more than 40,000 with Morgan Stanley; over 24,000 with Citigroup’s Citibank; over 23,000 with Bank of America; and almost 19,000 with Goldman Sachs. 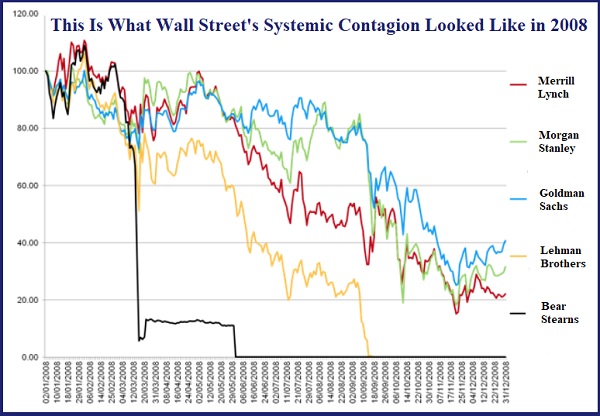 Lehman’s interconnectedness with other major Wall Street firms certainly fueled some of the systemic contagion on Wall Street in 2008. But the real culprit was Citigroup – a reckless trading house on Wall Street which owned, both then and now, a large federally-insured commercial bank, Citibank. These are just a few of the headlines about Citigroup that ran long before Lehman’s collapse into bankruptcy:

April 20, 2008, New York Times: “Citigroup Records a Loss and Plans 9000 Layoffs,” explaining that the bank reported a $5.1 billion loss and would have to slash jobs.

June 26, 2008, Wall Street Journal: “Citigroup: Worth Less and Less Every Day,” shares the news that the stock was worth one-third of where it had been at its 52-week high.

On July 14, 2008, Bloomberg News reported that in addition to holding $2.2 trillion in assets on its balance sheet, Citigroup has $1.1 trillion of “mysterious” assets off its balance sheet, including “trusts to sell mortgage-backed securities, financing vehicles to issue short-term debt and collateralized debt obligations, or CDOs, to repackage bonds.”

Sheila Bair, the Chair of the Federal Deposit Insurance Corporation in 2008, wrote the following about Citigroup in her book Bull by the Horns:

“By November [2008], the supposedly solvent Citi was back on the ropes, in need of another government handout. The market didn’t buy the OCC’s and NY Fed’s strategy of making it look as though Citi was as healthy as the other commercial banks. Citi had not had a profitable quarter since the second quarter of 2007. Its losses were not attributable to uncontrollable ‘market conditions’; they were attributable to weak management, high levels of leverage, and excessive risk taking. It had major losses driven by their exposures to a virtual hit list of high-risk lending; subprime mortgages, ‘Alt-A’ mortgages, ‘designer’ credit cards, leveraged loans, and poorly underwritten commercial real estate. It had loaded up on exotic CDOs and auction-rate securities. It was taking losses on credit default swaps entered into with weak counterparties, and it had relied on unstable volatile funding – a lot of short-term loans and foreign deposits. If you wanted to make a definitive list of all the bad practices that had led to the crisis, all you had to do was look at Citi’s financial strategies…What’s more, virtually no meaningful supervisory measures had been taken against the bank by either the OCC or the NY Fed…Instead, the OCC and the NY Fed stood by as that sick bank continued to pay major dividends and pretended that it was healthy.”

Notice the sentence in the above paragraph that reads: “It was taking losses on credit default swaps entered into with weak counterparties….” Bair was describing the situation in 2008. Now consider this headline we ran just last week at Wall Street On Parade: New Study: Wall Street Banks Are Doubling Down on Risk by Selling Credit Default Swaps on their Risky Derivatives Counterparties. It is nothing less than an indictment of the U.S. Congress that this is allowed to happen after derivatives caused the greatest U.S. economic collapse in 2008 since the Great Depression.

The official report from the Financial Crisis Inquiry Commission, following an in-depth investigation of the 2008 collapse, wrote this about Credit Default Swaps:

“OTC derivatives contributed to the crisis in three significant ways. First, one type of derivative—credit default swaps (CDS)—fueled the mortgage securitization pipeline. CDS were sold to investors to protect against the default or decline in value of mortgage-related securities backed by risky loans…

“Second, CDS were essential to the creation of synthetic CDOs. These synthetic CDOs were merely bets on the performance of real mortgage-related securities. They amplified the losses from the collapse of the housing bubble by allowing multiple bets on the same securities and helped spread them throughout the financial system…

This morning the Bank of England is in full blown crisis mode, setting up another emergency bailout facility that is very similar to that used by the Fed during the 2008 financial crisis. And, once again, derivatives are at the heart of the problem.

For its part, the Fed announced last year that it had, for the first time in its 109-year history, created a Standing Repo Facility where, on a permanent basis it will make $500 billion available to bail out the hubris on Wall Street. The Fed Chair has the power to increase that $500 billion on a temporary basis at his “discretion.”

And if all of this wasn’t sickening enough, the Fed Chairman who set the Fed on the course of endless Wall Street bailouts, quantitative easing, and destructive meddling in markets — Ben Bernanke — was one of three receiving the Nobel Prize in economic sciences this morning. (You can’t make this stuff up.)

It’s long past the time for the United States Congress to put an end to these serial bailouts of Wall Street by the Fed and pass legislation to restore the Glass-Steagall Act so that the casinos on Wall Street are permanently separated from the nation’s federally-insured banks.