Charts: “Massive Buyers’ Strike” for Tech; Bitcoin as an Inflation Hedge Exposed as a Bad Joke; Megabanks in Freefall

Last October 6, Bloomberg News had a prominent headline on their digital front page that read: “Citi Says Banks Are In, Tech Is Out Ahead of Rates Lift-Off.”

The thrust of the article was this:

“In the race to find the best hedges against higher rates and inflation, Citigroup Inc.’s chief global equity strategist is moving with the tide toward global financial stocks.

“Like a growing number of his peers, Robert Buckland expects value stocks to provide a degree of protection against the market turbulence brought about by rising bond yields.”

There’s a sleight of hand in that phrasing, somehow transporting the riskiest megabanks and their trillions of dollars in opaque derivatives into “value stocks.” A global bank is to a value stock what a loaded grenade is to a box of granola. There is zero correlation. (See our warning about this back on October 6.)

If you had followed Buckland’s advice and bought global bank stocks on October 6, this is what your portfolio might look like today: 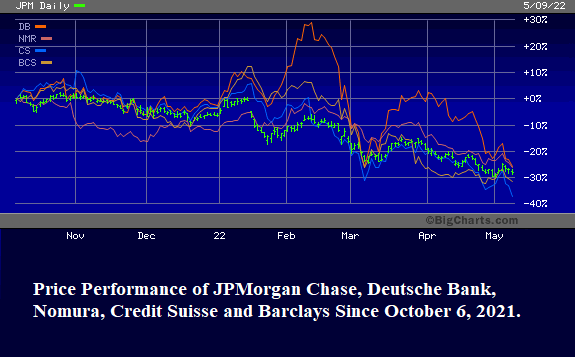 U.S. megabanks have not held up either, with the largest bank in the United States — JPMorgan Chase — which perpetually brags about its “fortress balance sheet,” outpacing the losses at its competitors. 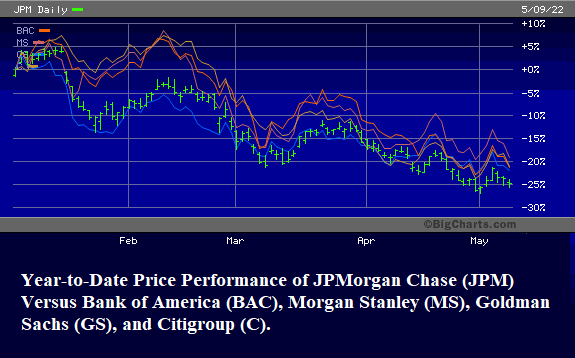 The tech wreck, however, has been worse. Yesterday, Jefferies tech analyst Brent Thill appeared on CNBC and shared the misery taking place on the company’s tech trading desk. Thill said:

“This has taken on more negativity than we could have imagined. We have no buyers on our desk. There’s max pain and it’s darker than I’ve seen in the last decade in covering many of these names.”

A little later in the interview, Thill added this: “I can tell you with high conviction that the biggest names on Wall Street right now are sitting out this and waiting…there’s a massive buyers’ strike right now.”

(As the market has continued to melt down, we have been turning on CNBC at lunchtime to keep tabs on what kind of advice is being doled out to the investing public.)

The truth is that things are going to get a lot worse for the tech heavy Nasdaq Composite Index, which is a market-capitalization weighted index, and where technology stocks represent just over half the Index. As the chart below shows, on a year-to-date basis through yesterday, May 9, the FAANG stocks have taken a beating but more serious pain is highly likely in the cards. That’s because Apple has been performing in lockstep with the S&P 500 rather than with its peer tech stocks. As of yesterday’s close, Apple’s market cap is still $2.46 trillion. (Yes, trillion.) That has helped hide the scale of the real deterioration that has been taking place in the Nasdaq. (See our report of December 28, 2021: A Tale of Two Markets: S&P 500 Notches Its 69th Record Close as the Bottom Falls Out of the Nasdaq.) 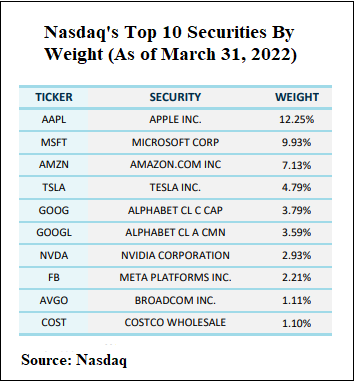 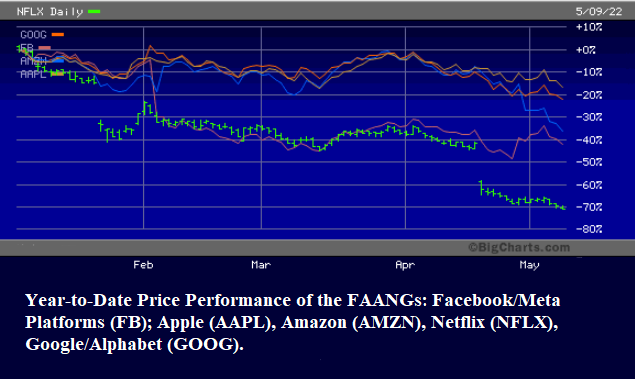 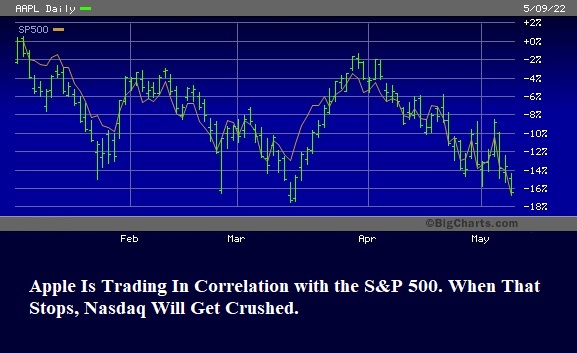 The wheels are also coming off the nutty myth that Bitcoin would function as an inflation hedge. Instead, it’s functioning just as Warren Buffet suggested: as “rat poison squared.”  From a high of $69,355 last November, Bitcoin futures closed yesterday at $30,930, a decline of 55 percent. 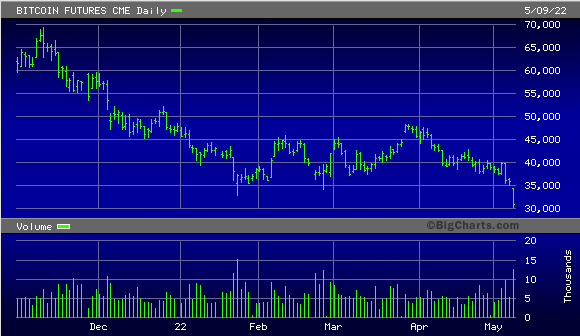