Five Days after the Tragic Death of Its Bearish Equity Strategist, Tobias Levkovich, Citigroup Puts Out a Bullish Call on Global Bank Stocks

Tobias Levkovich, Chief U.S. Equity Strategist at Citigroup, Died on October 1, 2021. His Death Is Being Investigated by a Homicide Squad.

Buying global bank stocks at this moment in time would be like storing dynamite next to your fire pit.

One of the worst pieces of advice we’ve ever read at Bloomberg News had a prominent headline on their digital front page early this morning. It read: “Citi Says Banks Are In, Tech Is Out Ahead of Rates Lift-Off.” The advice is so bad that we found ourselves pondering if this was a paid post from Citigroup. There wasn’t the typical paywall on the article, which further fueled our suspicions.

The gist of the article is this:

“In the race to find the best hedges against higher rates and inflation, Citigroup Inc.’s chief global equity strategist is moving with the tide toward global financial stocks.

“Like a growing number of his peers, Robert Buckland expects value stocks to provide a degree of protection against the market turbulence brought about by rising bond yields.”

For starters, never take advice on buying global bank stocks from a global bank that blew itself up just 13 years ago and whose share price has yet to recover. The S&P 500 is up 200 percent from before the crash in 2008 but Citigroup is still down 75 percent from 13 years ago. (Citigroup did a 1-for-10 reverse stock split at the opening of trading on May 9, 2011 in order to dress up its share price. The 1-for-10 reverse split meant that investors who owned 100 shares of Citigroup were left with just 10 shares – but those 10 shares had a much prettier share price to obscure the reality that the investor’s life savings had been put through a shredder.)

One has to seriously question if long-time chief U.S. equity strategist at Citigroup, Tobias Levkovich, would have challenged this recommendation, had he not died on October 1. Levkovich succumbed to injuries suffered from being hit by a car while walking early in the morning in Woodmere, Long Island on September 1.

Levkovich had been very bearish on the stock market right up to his tragic, outmatched encounter with a Toyota Camry.

According to a statement released on October 1 by the Nassau County Police Department on Long Island, “Homicide Squad Detectives” are investigating the matter. Had the death of a mega bank employee occurred in Wall Street’s hometown of Manhattan, we can assure you that the death would not be investigated as a homicide and you might not even be able to learn where and how the death occurred. (See JPMorgan Managing Director Dies Suddenly; Has Links to Other JPM Deaths.)

In April, Levkovich had written a commentary comparing the current market to the euphoria surrounding the 1999 dot.com bubble just before it collapsed.

The last investment a smart investor would want to own heading into a market crash is a global bank stock. That’s because every form of concentrated risk resides there. As we learned earlier this year in the blowup of the Archegos family office hedge fund, global banks have been sneaking around and loaning out their balance sheets to hedge funds by making margin loans leveraged by as much as 85 percent; the banks also have billions of dollars in loan exposure to subprime-rated companies and hundreds of trillions of dollars in opaque derivatives, with their peer global banks sitting as the counterparties to these trades.

As the charts below indicate, Citigroup was the worst performing U.S. mega bank stock in the crash of 2008, falling by 90 percent and sporting a 99-cent handle in March of 2009. Citigroup also crashed by 40 percent, far more than its peer banks, in the rapid but brief crash in March of last year.

The charts below also show that the S&P 500 (ticker SPX) fell far less than global bank stocks during both crashes. 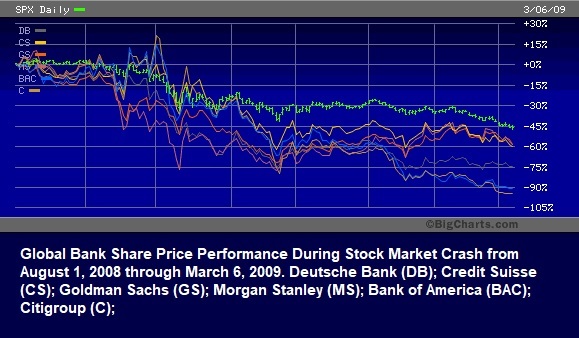 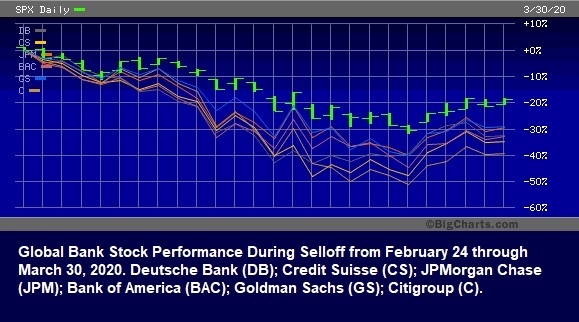