Brutal Stock Deterioration: 46 Percent of Nasdaq Stocks Are More than 50 Percent Below their 52-Week High

The stock market indices that get all the headlines have failed to capture the brutal deterioration that has been occurring for months among the individual stock components of those indices.

In early February, Bank of America reported that 46 percent of Nasdaq’s component companies were more than 50 percent below their 52-week highs. And the deterioration in breadth began long before February.

A chart published by Liz Ann Sonders, Chief Investment Strategist for Charles Schwab & Co., on January 31 of this year further underscored the deterioration occurring below the headline index numbers. Sonders reported that the average stock decline in the Russell 3000 was a drop of 32 percent from its 52-week highs. Equally alarming, companies in the 10th decile within the Russell 3000 had experienced an average decline of nearly 70 percent from their 52-week high. 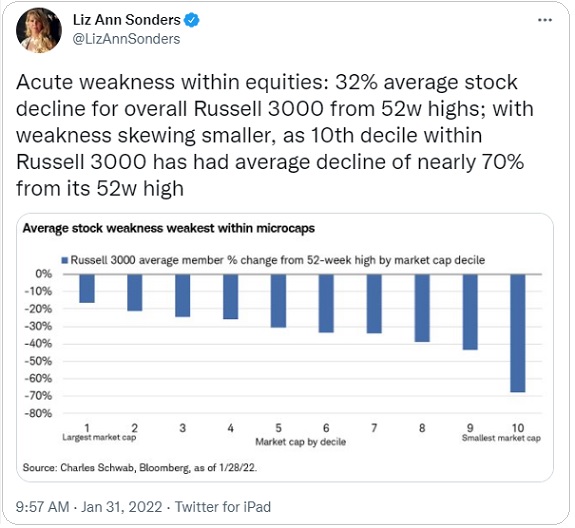 Part of the problem stems from the low-quality of companies that former SEC Chairman Jay Clayton allowed to be brought to market in IPOs by Wall Street. See our report: SEC Chair Jay Clayton Left Markets in the Biggest Mess Since 1929.

The deterioration in the market has picked up steam as inflation has proven itself to be anything but “transitory” and as the stock market prices in the possibility of more rate hikes from the Fed this year than initially expected.

The Federal Reserve Board of Governors is holding a closed-door meeting at 11:30 a.m. today to decide on the Discount Rate that its Federal Reserve Banks will be charging when the Federal Open Market Committee (FOMC) votes to raise the Fed Funds Rate. The Fed typically releases its announcement on the Fed Funds Rate and Discount Rate simultaneously following a meeting of the FOMC. The Fed can, however, make an announcement between FOMC meetings if the situation seems to require urgent action. (The Board of Governors votes on the Discount Rate while the FOMC votes on the Fed Funds Rate.) The next regularly-scheduled meeting of the FOMC is set for March 15-16.

The Federal Reserve Board of Governors held an earlier closed-door meeting on January 18, also to make a review and determination of the Discount Rate. The January 18 meeting was not followed by an announcement of any increase in either the Discount Rate or Fed Funds rate. Since that time, however, inflation in the U.S. has ratcheted up and rhetoric in the press has grown that Fed Chair Jerome Powell has fallen behind the curve in keeping inflation in check.