Since the Fed Announced It Was “Tapering” Last November, It’s Actually Added $332 Billion in Liquidity with New Debt Security Purchases 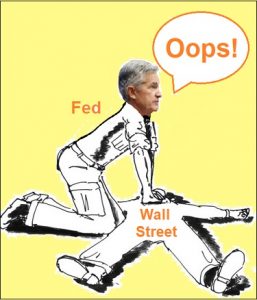 If you’re wondering why inflation is running hotter than it has in 40 years and why St. Louis Fed President James Bullard has broken with protocol and is openly criticizing the Fed on television for falling behind the curve on inflation, here’s a key part of that story.

The Fed’s Federal Open Market Committee (FOMC) made its first announcement that it would begin “tapering” the amount of its purchases of Treasurys and Mortgage-Backed Securities (MBS) on November 3 of last year. On that date, according to the Fed’s own H.4.1 filing, it held $8.063 trillion in debt securities. As of last Wednesday, that figure had risen to $8.395 trillion or an increase (not decrease) of $332 billion in the span of just three months.

The Fed’s practice of buying up debt securities from Wall Street firms in order to add cash (liquidity) to financial markets is called Quantitative Easing or QE, because it is a form of “easing,” not tightening, of credit conditions.

Most Americans understood the Fed to mean last November that it had stopped easing and was now tightening credit market conditions to address inflationary pressures that were taking root in the economy. Instead, the $332 billion in additional debt purchases actually represented the equivalent of a quarter-point cut in interest rates.

As Liz Ann Sonders, Chief Investment Strategist at Charles Schwab tweeted on February 11: “Important to remember that balance sheet shrink is also a form [of] tightening (approximate relationship is $300b of shrink = ~25bps hike)…”

Conversely, if you increase (rather than shrink) your balance sheet by $332 billion in new debt purchases, you’ve effectively eased by 25 basis points (bps), the equivalent of a quarter-point interest rate cut. (25 basis points equal one-quarter point.)

Is it any wonder that inflation, as measured by the Consumer Price Index, hit a 40-year high of 7.5 percent year over year in January?

But buried in the fine print of the announcement were these two additional mandates for the New York Fed’s Open Market Desk:

“Increase holdings of Treasury securities and agency MBS by additional amounts as needed to sustain smooth functioning of markets for these securities.”

The Fed announced further cuts to the amounts it was buying in Treasury securities and MBS in January and February, but the bottom line is that it was still buying up debt instruments (a form of easing) as inflation raged.

The Fed’s current plan is to cease all purchases of Treasury securities and Mortgage-Backed Securities by March.

Removing the punchbowl is not popular on Wall Street and the New York Fed, which carries out the securities purchases for the Fed, does not like to displease Wall Street – since it is literally owned by the megabanks in New York.