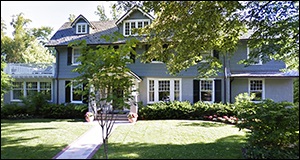 Jay Powell’s Home in Chevy Chase, Maryland Has No Mortgage, According to Public Records. Zillow Puts Its Value at $4.7 Million. Powell Could Have Taken a Home Equity Line of Credit If He Needed to Raise Cash, Rather than Selling a Stock Fund.

On Monday, October 18, the fearless Robert Kuttner at the American Prospect, broke the news that Fed Chairman Jerome Powell had sold between $1 million and $5 million of the Vanguard Total Stock Market Index Fund on October 1, 2020, the same day that Powell had been on four phone calls with Treasury Secretary Steve Mnuchin, who was coordinating the White House response to the financial crisis resulting from the pandemic.

The story went viral and forced the Federal Reserve to offer a preposterously lame excuse for what was obviously a desire by Powell to reduce his exposure to the stock market, despite his having access to more insider information than any other human on the planet.

The same day that Kuttner’s story ran, Mike Derby, a reporter for the Wall Street Journal, wrote that a Fed representative had characterized the large Vanguard sale as “for family expenses.”

The very next day, Rachel Siegel, reporting for the Washington Post, flatly stated that the sale was for “family expenses,” while also suggesting that Kuttner’s article was an attack job on Powell’s record.

To further cement that contrived message in the minds of Fed watchers, the following day, October 20, the international wire service, Reuters, via their reporter, Howard Schneider, again quoted a Fed spokesperson stating that the Vanguard sale was to “cover Powell’s family expenses.”

A man with no mortgage on a home with 6.5 baths, who is making over $200,000 a year as Fed Chair, and still needs $1 million to $5 million to cover “family expenses,” is perhaps too elitist to work for the American people at a time when millions of Americans can’t afford rent on a one-bedroom apartment.

Any rookie financial advisor on Wall Street could spend 10 minutes looking at Powell’s financial disclosure form and immediately realize that the story the Fed put out was completely lacking in credibility.

Even a first-year financial advisor knows that if a family genuinely needs to get their hands on cash, they would be told by their financial advisor to first look to their cheapest source of funds. In Powell’s case, the first place to look would be money already sitting in (wait for it) cash. Per the table below, Jerome Powell’s financial disclosure form lists seven line items described as “Cash Account.” They tally up to a range of $952,002 to $1,980,000.

Another reason to tap cash accounts is that they do not trigger onerous capital gains taxes. According to Powell’s previous financial disclosure forms, he had owned that Vanguard Total Stock Market Index Fund since at least 2017, meaning he was going to get hit with significant capital gains taxes when he sold it.

There were two far smarter ways to do that than selling a stock fund and getting hit with capital gains taxes. According to public records, Powell owns a home in Chevy Chase, Maryland that Zillow puts at a value of $4.7 million. Public records show it has no mortgage on it. Powell and his wife are familiar with how easy it is to take out a home equity loan because they previously had a $600,000 home equity line of credit on a previous home they owned in Chevy Chase. The home equity line was with the Chevy Chase Savings Bank.

If Powell still needed more funds (although one certainly has to question what on earth they would be for), his financial disclosure form shows on line 1.10 that he owned $1 million to $5 million in the Goldman Sachs Short Duration Tax Free Fund. If Powell’s true motive was not to reduce his exposure to the stock market (based on troubling concerns he had learned as Fed Chairman) then that would have been the fund to sell since short-term instruments have a lot less capital gains embedded in them than do long-term holdings of stocks following a raging bull market.

To put it bluntly, to borrow a phrase from PolitiFact, we rate this excuse from the Fed for why Powell sold $1 million to $5 million in a stock fund a “Pants on Fire” preposterous story. 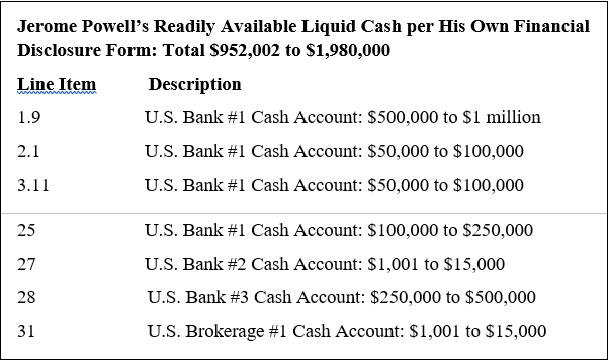