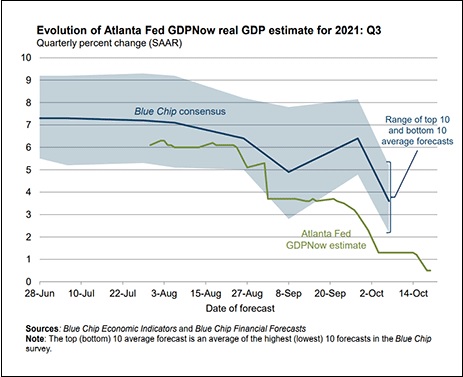 This coming Thursday morning at 8:30 a.m., the Department of Commerce’s Bureau of Economic Analysis (BEA) will release its advance estimate for U.S. Gross Domestic Product (GDP) in the third quarter. Some folks are going to have a lot of egg on their face at 8:31 a.m. That’s because the Wall Street crowd of economists has remained wildly optimistic on how the U.S. economy behaved in the third quarter, despite an upsurge in the Delta variant of COVID-19 hobbling consumer confidence and spending. Most economists on Wall Street are forecasting real GDP growth in the third quarter of more than 3 percent.

That Wall Street optimism has not been experienced by the number crunchers on the GDPNow Team at the Atlanta Fed. As of this morning, the AtlantaFed’s GDPNow crew can barely find a pulse for U.S. growth in the third quarter. They are predicting real GDP growth (seasonally adjusted annual rate) in the third quarter of just 0.5 percent. That forecast comes with the following caveat:

“GDPNow is not an official forecast of the Atlanta Fed. Rather, it is best viewed as a running estimate of real GDP growth based on available economic data for the current measured quarter….”

As the chart above indicates, the GDPNow Team’s number for third quarter GDP has been melting away faster than a snow cone in July. On August 2, it stood at 6.3 percent.

The AtlantaFed’s GDPNow Team will have one last chance to tweak its forecast this Wednesday, after it evaluates the data releases on durable goods orders for September and advance economic indicators.

Regardless of who is right on their number, there is no debate that GDP growth fell off a cliff from its reading in the second quarter, which came in at 6.7 percent.

The plunge in third quarter GDP versus second quarter GDP follows a similar plunge in consumer confidence. The Conference Board’s Consumer Confidence Index fell further in September, after declines in both July and August. The Index now stands at 109.3 from a reading of 128.9 in June – a 15 percent drop. The report on September 28 noted the following:

“Consumer confidence dropped in September as the spread of the Delta variant continued to dampen optimism. Concerns about the state of the economy and short-term growth prospects deepened, while spending intentions for homes, autos, and major appliances all retreated again.”

The U.S. consumer has now had 19 months of hunkering down in their homes, cutting their own hair, while avoiding vacations, dining out and gatherings with friends. The consumer is becoming downright snarly. The University of Michigan’s Consumer Sentiment Index for August captured the consumer mood as follows:

“There was no lessening in late August in the extent of the collapse in consumer sentiment recorded in the first half of the month. The Consumer Sentiment Index fell by 13.4% from July, recording the least favorable economic prospects in more than a decade. The Sentiment Index has only recorded larger losses in six other monthly surveys since 1978. The losses were especially large in the Expectations Index, and widespread across all demographic groups, regions, and the outlook for the economy. Personal financial prospects continued to worsen due to smaller income gains amid higher inflationary trends…Consumers’ extreme reactions were due to the surging Delta variant, higher inflation, slower wage growth, and smaller declines in unemployment. The extraordinary falloff in sentiment also reflects an emotional response, from dashed hopes that the pandemic would soon end and lives could return to normal.”

“The steep August falloff in consumer sentiment ended in early September, but the small gain still meant that consumers expected the least favorable economic prospects in more than a decade. Just two components posted additional declines: buying attitudes for household durables fell again in early September to a low reached only once before in 1980, and long-term economic prospects fell to a decade low. Although the year-ahead economic outlook improved slightly in early September, it was still 31% below the June peak; the same was true for the small rebound in unemployment expectations. The decline in assessments of buying conditions for homes, vehicles, and household durables left all three near all-time record lows….”

The debate now turns to whether the supply chain grinch will steal Christmas, with Oxford Economics writing as follows:

“With an armada of vessels clogging ports unable to unload their wares, stores and warehouses may not receive goods in time for the holiday season. The Delta variant curbed demand in the third quarter, but supply restraints amid strong demand may be more of a drag in the current quarter.”