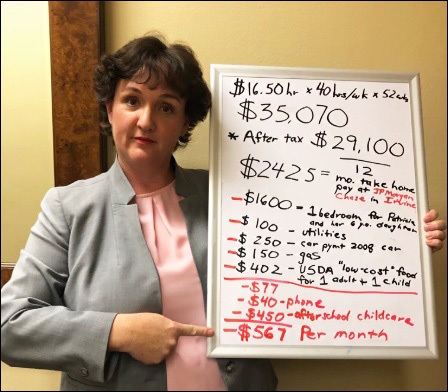 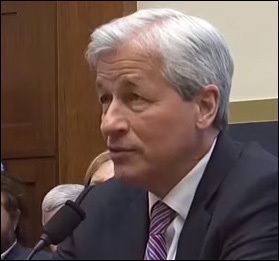 What a difference a day makes. On April 9, the day before JPMorgan Chase CEO Jamie Dimon was to testify at a House Financial Services Committee hearing along with six of his fellow mega bank CEOs, his legions of publicists and handlers still thought there might be a presidential run in his future. Today, not so much.

You know just how torturous the day was for Dimon when the worst part wasn’t his being forced to admit that his bank previously accepted African-American slaves as collateral for loans. That line of questioning came from Congressman Al Green of Texas.

Green said that his ancestors were slaves and asked Dimon if it was true that JPMorgan Chase had released information in 2005 “indicating that it directly benefited from slavery” and had made loans using slaves as collateral. Dimon said he believed this was true. In fact, according to a 2005 report in The Guardian, it was actually worse than that – the bank’s predecessor institutions had actually owned slaves. Two banks that are now part of JPMorgan Chase made loans to plantation owners of slaves in the 1800s, accepted 13,000 slaves as collateral, and “ended up owning about 1250 slaves” when the plantation owners defaulted on the loans, according to The Guardian report. 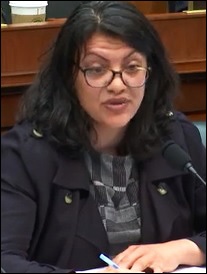 The poignancy of this line of questioning — of banks’ willingness to act against humanity in the name of competitiveness or profits — would come into sharp focus again later in the hearing when Dimon attempted to justify his bank being the number one funder of fossil fuels in the world. That line of questioning came from Congresswoman Rashida Tlaib of Michigan. The exchange went like this:

Tlaib: “Mr. Dimon, your bank alone has provided more than $195 billion in fossil fuel lending and underwriting over the past three years since signing of the Paris Climate Agreement, making your bank the number one funder of fossil fuels in the world…Don’t say that you’re committed to clean and sustainable financing because your company’s words are not consistent with your actions. I would call this gaslighting…but for the sake of this hearing I’ll say that you are greenwashing your own track record in duping the American people into believing that you are helping to address climate change.”

Dimon indicated that JPMorgan Chase had started green initiatives but added this:

Dimon: “In the meantime the United States does need energy to eat, drive, get here, eat, ventilate hospitals. And there’s a smart way to do this and a not smart way to do this.” (Dimon must have been hungry at this point in the long hearing because he used the word “eat” twice in that one sentence.  A potentially more relevant example might have been energy to run the giant pumps to drain the flooded U.S. cities we are increasingly seeing from the 500-year floods that now seem to come annually.) 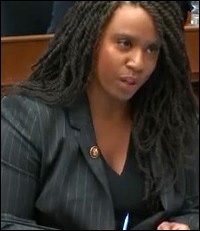 After being flogged for greenwashing, Congresswoman Ayanna Pressley of Massachusetts lectured Dimon on  “pink lining.” Pressley explained that “Women were 30 to 46 percent more likely to receive subprime mortgage loans during the financial crisis than men. And black women were 256 percent more likely to receive subprime loans than white men – 256 percent!” Testing Dimon’s knowledge of the $43.7 billion in serial fines his bank has paid for wrongdoing over the past decade, Pressley asked him what the $53 million settlement he agreed to in 2017 with the Department of Justice was about. Dimon said “I don’t recall.” Pressley then explained that it was for “discriminatory lending practices.”

On the point of discrimination, Congressman Al Green had also called to the attention of the hearing room that all seven mega bank CEOs appearing on the panel were white men. To make certain that he had that correct, he asked the CEOs to raise their hand if any were other than white men. None did so. Green then asked the bank CEOs: “If you believe that your likely successor will be a woman or person of color would you kindly extend a hand into the air.” No hands went up. Green pressed on: “Is your bank likely to have a female or person of color [as CEO] within the next decade.” Hands went up among the following CEOs: Michael Corbat of Citigroup; Brian Moynihan of Bank of America; Ronald O’Hanley of State Street; Charles Scharf of Bank of New York Mellon; and David Solomon of Goldman Sachs.

Only Dimon and James Gorman, CEO of Morgan Stanley, refused to raise their hand to that question – suggesting they can’t see their legions of white, male, predator, testosterone-charged traders working for a woman or minority. It should also be noted that Gorman now oversees many of the same male brokers who once worked for Dimon. (Morgan Stanley completed its buyout of Smith Barney’s predominantly white-male retail brokerage firm in 2013.)

As depicted in Susan Antilla’s award-winning book, Tales from the Boom Boom Room: Women versus Wall Street, Dimon oversaw the ranks of the Smith Barney male brokers in a previous job which put the firm under the national glare of headlines for five years in a Federal lawsuit alleging sexual assaults, sexual harassment and gender discrimination at coast-to-coast branches at the firm. (See Editor’s note below.)

Another tough point for Dimon in the hearing came when Congresswoman Katie Porter of California asked Dimon for help with a math problem since he is so eager to tell the U.S. how to manage its resources. Porter explained how Jamie Dimon’s $31 million in compensation in 2018 compares to what the bank is paying one of its bank tellers who is a single mother with a 6-year old daughter. She says she went to Monster.com and found a job in her hometown of Irvine, California for a bank teller at JPMorgan Chase. She said the job pays $16.50 per hour or $35,070 per year or an after-tax amount of $29,100 for a single mother with a six-year old child.

After deducting for rent on a 1-bedroom apartment, utilities, car payment on a 2008 car, gas, food, the cheapest cell phone, and after-school child care, the woman would be $567 in the whole each month. Porter asks Dimon how this woman should manage her budget short-fall while she’s working full time at his bank. Dimon says “I don’t know that all of your numbers are accurate” (which prompts Porter to post the photo above on her Twitter page after the hearing). Dimon also says he doesn’t know what he would advise the woman to do but he’d like to have a conversation with the woman and try to be helpful. Porter tells him: “What I’d like you to do is provide a way for families to make ends meet. So that little kids who are six years old living in a one-bedroom apartment with their mother aren’t going hungry at night because they’re $567 short…” (See the YouTube video clip below.)

Another embarrassing moment in the hearing for Dimon, who was testifying under oath, was when he attempted to dodge the fact that his bank forces both its employees and customers into mandatory arbitration and denies them the ability to access Federal and State courts when they have a claim against his bank.

Congressman Brad Sherman of California asked the CEOs to raise their hand if they didn’t force their middle class customers into forced arbitration as opposed to allowing them to take claims against the bank through the U.S. court system. Dimon raised his hand.

In 2016, Public Citizen and other consumer advocacy organizations wrote to Jamie Dimon, urging the following regarding its binding arbitration agreements:

“Our national public interest, consumer advocacy and citizen organizations write to urge you to drop the pre-dispute mandatory (or forced) arbitration clauses buried in JPMorgan Chase & Co. customer account agreements. Attached is a petition with more than 100,000 signatures from across the country calling for Chase and four other banks to promptly remove all arbitration requirements from your contracts with customers. These non-negotiable terms simply deny customers their access to the courts should they seek to pursue legal claims against your company. They also deprive your customers of important legal protections. The result is that consumers cannot practically and fairly resolve disputes with you or seek remedies for harm caused by wrongful conduct.”

In 2013, one of JPMorgan Chase’s licensed brokers discovered the legal twilight zone one enters when attempting to challenge wrongdoing at JPMorgan Chase. Johnny Burris worked in a JPMorgan Chase branch near Phoenix, Arizona. He complained that the bank was pressuring him to sell its own proprietary mutual funds to clients rather than allowing him the independence to select the funds that he felt were in the clients’ best interests. After Burris refused to sell the in-house funds, the bank terminated his employment. The bank then had one of its own employees draft customer complaints against Burris and file them with FINRA, the self-regulator that also oversees Wall Street’s private justice system known as binding or mandatory arbitration, according to the New York Times. During the arbitration hearing, the JPMorgan employee denied drafting the claims for the customers.

The New York Times’ Nathaniel Popper wrote an article in 2015 on the perversion of justice against Burris and quoted the customers, by name, denying that they had made the complaints or had even seen the text of what they were signing against Burris.

In December 2015, the Securities and Exchange Commission appeared to validate the very complaints alleged by Burris, fining JPMorgan Chase $267 million and making it admit to wrongdoing. JPMorgan Chase paid an additional fine of $40 million to the Commodity Futures Trading Commission in a parallel action. Julie M. Riewe, Co-Chief of the SEC Enforcement Division’s Asset Management Unit, stated the following in the SEC’s announcement of the fine:

“In addition to proprietary product conflicts, JPMS [JPMorgan Securities] breached its fiduciary duty to certain clients when it did not inform them that they were being invested in a more expensive share class of proprietary mutual funds, and JPMCB [JPMorgan Chase Bank] did not disclose that it preferred third-party-managed hedge funds that made payments to a J.P. Morgan affiliate. Clients are entitled to know whether their adviser has competing interests that might cause it to render self-interested investment advice.”

JPMorgan Chase stands out from the other six mega banks that were on the panel yesterday in the following respects: Dimon is the only CEO that has remained at the helm of his firm since the financial crisis in 2008 and $43 billion in fines for serial misconduct at the bank; JPMorgan Chase is the only bank to have  pleaded guilty to three criminal felony counts in the past five years; and the bank is the only Wall Street institution to have been compared to the Gambino crime family in an in-depth book by two trial attorneys. (See here.)

Editor’s Note: The co-author of this article and Editor of Wall Street On Parade, Pam Martens, was the lead plaintiff in the Smith Barney lawsuit referenced above. She withdrew from the settlement and received no money from it. Together with the New York State and New York City chapters of the National Organization for Women, Martens called the settlement a sham and a travesty of justice for women on Wall Street.