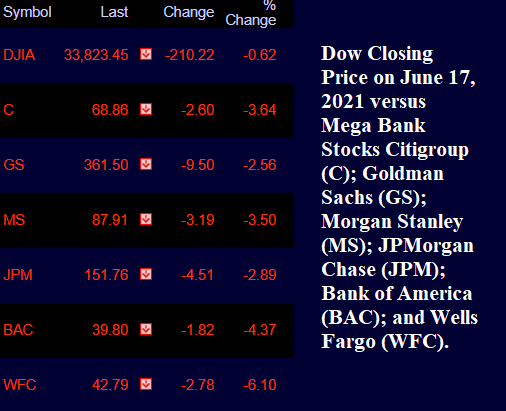 Wells Fargo bank analyst Mike Mayo appeared on CNBC this morning to paint a rosy picture for how banks would be treating the Fed’s less than dovish statement yesterday. Mayo said this about the banks:

“Back in the 70s or even 1994 the inflation caused unrealized securities losses, derivatives losses, asset/liabilities mismatches. So too much inflation is hell for banks. But we think what’s happening now is a dose of heaven. And so higher rates sooner can allow banks to finally earn more money on all those deposits that they’ve gathered. And so this means that assets reprice faster than their liabilities.”

What actually priced much faster than either assets or liabilities were the share prices of the mega banks on Wall Street. The cheery words had barely left Mayo’s tongue before the biggest banks on Wall Street went into a sharp swoon. His employer, Wells Fargo, fared worst of all. By 12:39 p.m. this is where things stood: Wells Fargo (WFC) was down 4.79 percent; Citigroup (C) was off by 4.22 percent; Bank of America (BAC) had lost 4.11 percent; Morgan Stanley (MS) had given up 3.93 percent; Goldman Sachs (GS) shaved 3.33 percent while JPMorgan Chase gave up 2.92 percent.

Things weren’t much rosier by the close (see chart above) with the shares of Wells Fargo giving up an astonishing 6.10 percent on a day that the Dow Jones Industrial Average was off by only 0.62 percent.

This is not the first time that Mayo has appeared to be selling a Goldilocks view of the Wall Street mega banks when it was not warranted. As the banks’ share prices were tanking in March of 2020, Mayo went on CNBC with this pitch:

As for any confidence one should have in the Fed’s stress tests to provide an early warning signal of Wall Street bank contagion, see Three Federal Studies Show Fed’s Stress Tests of Big Banks Are Just a Placebo.

And when it comes to all that liquidity at the banks that Mayo invoked in March of 2020, there is the contradictory reality that if the banks were rolling in liquidity they wouldn’t have needed those trillions of dollars in cumulative repo loans from the Fed beginning on September 17, 2019 – months before there were any reports of COVID-19 anywhere in the world. (See Fed Repos Have Plowed $6.6 Trillion to Wall Street in Four Months; That’s 34% of Its Feeding Tube During Epic Financial Crash.)

It’s best to take what one hears on cable news these days with a big grain of salt.