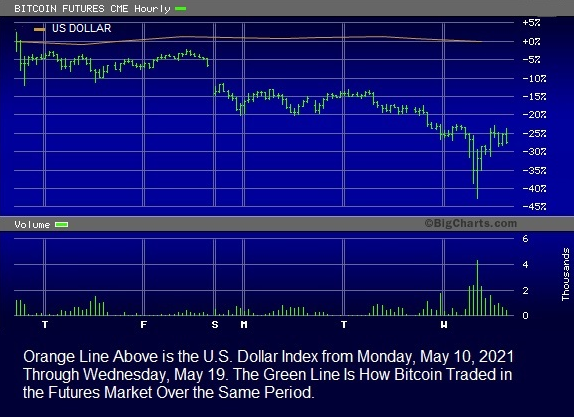 The chart above should provide ample proof to any thinking American that Bitcoin is about as appropriate as a payment mechanism as Elon Musk is appropriate as the CEO of an S&P 500 company. The U.S. Dollar Index, the orange line, is steady as she goes – meaning you have a stable currency to make payments for goods and services. In contrast, Bitcoin, the green line, looks like a heart attack patient being mugged on a gurney.

A crypto crash in U.S. markets on Wednesday, spurred by China taking decisive action on barring cryptocurrencies as a means of payment at financial institutions and payment companies, apparently lit a fire under the U.S. Treasury and Federal Reserve to finally come out of their bunkers on the subject. Senator Sherrod Brown, Chair of the Senate Banking Committee, released a powerful letter to the Office of the Comptroller of the Currency, the regulator of national banks (those that operate across state lines), warning about its chartering of crypto banks.

The U.S. Treasury released a report dubbed “The American Families Plan Tax Compliance Agenda.” It had this to say on crypto:

“Still another significant concern is virtual currencies, which have grown to $2 trillion in market capitalization. Cryptocurrency already poses a significant detection problem by facilitating illegal activity broadly including tax evasion.

“This is why the President’s proposal includes additional resources for the IRS to address the growth of cryptoassets. Despite constituting a relatively small portion of business income today, cryptocurrency transactions are likely to rise in importance in the next decade, especially in the presence of a broad-based financial account reporting regime. Within the context of the new financial account reporting regime, cryptocurrencies and cryptoasset exchange accounts and payment service accounts that accept cryptocurrencies would be covered. Further, as with cash transactions, businesses that receive cryptoassets with a fair market value of more than $10,000 would also be reported on. Although cryptocurrency is a small share of current business transactions, such comprehensive reporting is necessary to minimize the incentives and opportunity to shift income out of the new information reporting regime.”

A footnote in the report added that “the IRS has identified cryptocurrency transactions as an enforcement priority and recently included cryptocurrency reporting on the individual tax return, Form 1040.”

This approach from Treasury is like putting a Disney Princess band aide on a rattlesnake bite and hoping the poison doesn’t kill the patient.

Elon Musk, the billionaire CEO of Tesla, used $1.5 billion of corporate cash in January to buy Bitcoin as a Tesla asset. In a filing with the Securities and Exchange Commission, Tesla wrote that the action came with the approval of its Audit Committee.

Then you have Morgan Stanley, which has one of the largest fleets of retail brokers on the planet, announcing in its own SEC filings that it plans to stuff Bitcoin futures in its mutual funds and an annuity product for retirees.

Bitcoin is an enigma shrouded in both mystery and darkness. Its creator, Satoshi Nakamoto, is a fictitious character. When we asked the CME exchange that trades Bitcoin futures yesterday to give us a list of the 10 largest traders in Bitcoin futures contracts on Wednesday, the day of the crash, we were told: “we do not make client trading information available to the public.” Exchanges are supposed to police the trading of their members. The CME apparently views these giant hedge funds and Wall Street trading houses as “clients” who need to be shielded from public scrutiny.

Jerome Powell, Chairman of the Federal Reserve, was out with his own video statement on crypto yesterday. Typically, the Fed Chair makes his statements at formally called press conferences or at speaking events in front of economic groups. This Powell video just appeared out of the blue with a press release from the Fed at 2:00 p.m. yesterday. Powell made the following points on crypto:

“The effective functioning of our economy requires that people have faith and confidence not only in the dollar, but also in the payment networks, banks, and other payment service providers that allow money to flow on a daily basis. Our focus is on ensuring a safe and efficient payment system that provides broad benefits to American households and businesses while also embracing innovation…

“Recently, the rise of distributed ledger technology, which offers a new approach to recording ownership of assets, has allowed for the creation of a range of new financial products and services—including cryptocurrencies. To date, cryptocurrencies have not served as a convenient way to make payments, given, among other factors, their swings in value.

“Nonetheless, coins tied to the value of the dollar or another currency—known as ‘stablecoins’— have emerged as a new way to make payments. These stablecoins aim to use new technologies in a way that has the potential to enhance payments efficiency, speed up settlement flows, and reduce end-user costs—but they may also carry potential risks to those users and to the broader financial system. For example, although the value of a stablecoin may be tied to the value of a dollar, these coins may not come with the same protections as traditional means of payment, such as physical currency or the deposits in your bank account. Therefore, as stablecoins’ use increases, so must our attention to the appropriate regulatory and oversight framework. This includes paying attention to private-sector payments innovators who are currently not within the traditional regulatory arrangements applied to banks, investment firms, and other financial intermediaries.”

This whole crypto craze seems like a solution in search of a problem (and a thinly disguised get-rich scheme for shadowy billionaires). As NYU Professor and economist Nouriel Roubini has reminded folks: you can do “only five transactions per second with Bitcoin. With the Visa system you can do 25,000 transactions per second.” Exactly how is this financial innovation? On top of that, it’s driving the world backwards on tackling climate change as a result of the insane levels of electricity it takes to mine Bitcoin.

We, like millions of other Americans, have effortlessly purchased everything from masks to shoes to a vacuum cleaner over the internet during this past year of the pandemic. Within a few seconds of making the purchase, we see the charge on our credit card. A few seconds later we get an email showing a detailed description of the purchase and a link to track shipping of the purchase. At the end of the month, it takes literally two minutes to pay off the credit card by phone, having the amount deducted from our checking account at the bank.

Exactly where is the problem that requires this Machiavellian solution?

“Bitcoin’s value will continue to rise and fall depending on what people believe it is worth. This is sometimes called the ‘Tinker Bell Effect’ — a recognized economic term based on Peter Pan’s assertion that Tinker Bell existed simply because children believed she existed.”

There is the uncomfortable thought that the U.S. regulators who have let this cryptocurrency mess get so far out of hand, are the foolish “children,” believing in fairy tales, that Laboure might be referring to.

The best and strongest statement of the day was the release of a letter from Senator Sherrod Brown, the Chair of the Senate Banking Committee. Brown did not pull his punches. After Congressman Ted Budd, a Republican from North Carolina, had shamelessly shilled for chartering crypto banks at a House Financial Services Committee hearing on Wednesday, Brown wrote this to the new Acting Comptroller of the Currency, Michael Hsu:

“…A unifying concern among those stakeholders is that, in many cases, the companies that seek access to the benefits of a bank charter do not meet the same set of regulatory and consumer protection standards that banks are required to meet. The recent OCC approvals of national trust charters for these cryptocurrency firms raise similar concerns.

“A firm that cannot meet the rigorous requirements applicable to other banks should not be allowed to present itself to the public as a bank. Paxos, Protego and Anchorage seek to broaden access to cryptocurrencies and other risky and unproven digital assets and emerging technologies to traditional bank customers. Each company highlights their federally-chartered status – Paxos referring to itself as ‘Cutting-edge technology with bank-level oversight.’ In other words, these companies suggest that the OCC’s approval of their charters guarantees their business model is as safe, stable and dependable for customers as a local community bank. The fact is, given the many uncertainties present in the digital asset landscape as identified by other regulators, the volatility of digital asset valuations, and the disproportionate influence individuals can have on entire cryptocurrency markets, the OCC is not in a position to regulate these entities comparably to traditional banks.

“It is also unclear whether the OCC engaged in the appropriate due diligence to stand behind this ‘seal of approval’ before granting these charters. Former Acting Comptroller Brian Brooks actively encouraged cryptocurrency companies to apply for a national trust charter because it had ‘relatively easy requirements’ and is ‘just a faster charter to get.’ Not only could these charter approvals lead customers to underestimate the risks related to these assets, but it could undermine faith in the safety and stability of the entire banking system.”