Elon Musk Abruptly Stops Accepting Bitcoin to Pay for Tesla Cars. Did He Learn that Bitcoin Uses More Electricity Per Year than Sweden or Malaysia? 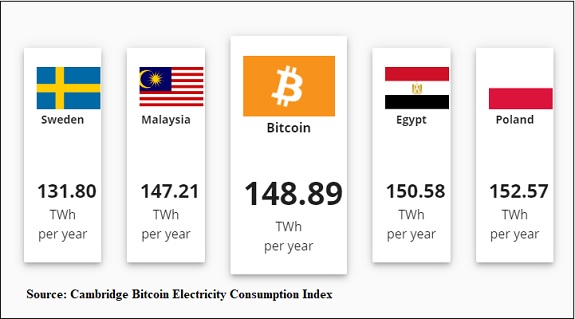 Elon Musk claims he wants to move the world toward a more environmentally sustainable future. Bitcoin is a sharp contradiction to that position.

Terawatt-hours (TWh) are a standard unit used to measure electricity consumption. According to the Cambridge Bitcoin Electricity Consumption Index (CBECI), Bitcoin is consuming more terawatt-hours than Sweden or Malaysia and close to the consumption of Egypt (a nation of 104 million people). (See chart above from CBECI.)

Another not-so-fun fact from the CBECI, “the amount of electricity consumed by the Bitcoin network in one year could power all tea kettles used to boil water in the United Kingdom for 33 years.”

In November 2018, researchers at Nature, a science journal dating back to 1869, wrote that production of Bitcoin “generated about as much carbon dioxide over 30 months as 1 million cars in the same period.”

If you are unfamiliar with how energy consumption is involved in “mining” Bitcoin, here’s a dive into that rabbit hole from Investopedia.

Tesla announced in its 10-K filing with the Securities and Exchange Commission on February 8 that it had invested a heart-stopping $1.5 billion in Bitcoin, a cryptocurrency that iconic investor Warren Buffet has called “rat poison squared.” The filing also detailed for investors the risks involved with that Bitcoin stake, writing as follows:

“In January 2021, we updated our investment policy to provide us with more flexibility to further diversify and maximize returns on our cash that is not required to maintain adequate operating liquidity. As part of the policy, which was duly approved by the Audit Committee of our Board of Directors, we may invest a portion of such cash in certain alternative reserve assets including digital assets, gold bullion, gold exchange-traded funds and other assets as specified in the future. Thereafter, we invested an aggregate $1.50 billion in bitcoin under this policy and may acquire and hold digital assets from time to time or long-term. Moreover, we expect to begin accepting bitcoin as a form of payment for our products in the near future, subject to applicable laws and initially on a limited basis, which we may or may not liquidate upon receipt.

“The prices of digital assets have been in the past and may continue to be highly volatile, including as a result of various associated risks and uncertainties. For example, the prevalence of such assets is a relatively recent trend, and their long-term adoption by investors, consumers and businesses is unpredictable. Moreover, their lack of a physical form, their reliance on technology for their creation, existence and transactional validation and their decentralization may subject their integrity to the threat of malicious attacks and technological obsolescence. Finally, the extent to which securities laws or other regulations apply or may apply in the future to such assets is unclear and may change in the future. If we hold digital assets and their values decrease relative to our purchase prices, our financial condition may be harmed…

“Finally, as intangible assets without centralized issuers or governing bodies, digital assets have been, and may in the future be, subject to security breaches, cyberattacks or other malicious activities, as well as human errors or computer malfunctions that may result in the loss or destruction of private keys needed to access such assets. While we intend to take all reasonable measures to secure any digital assets, if such threats are realized or the measures or controls we create or implement to secure our digital assets fail, it could result in a partial or total misappropriation or loss of our digital assets, and our financial condition and operating results may be harmed.”

In the first quarter of this year, Tesla sold 10 percent of its stake in Bitcoin and booked a profit of approximately $101 million from the sale, neatly helping its earnings picture for the quarter.