House Lawmakers Will Hear Today How the Integrity of U.S. Markets Is Being Dirtied by SPACs and Direct Listings: Coinbase Should Be a Case Study 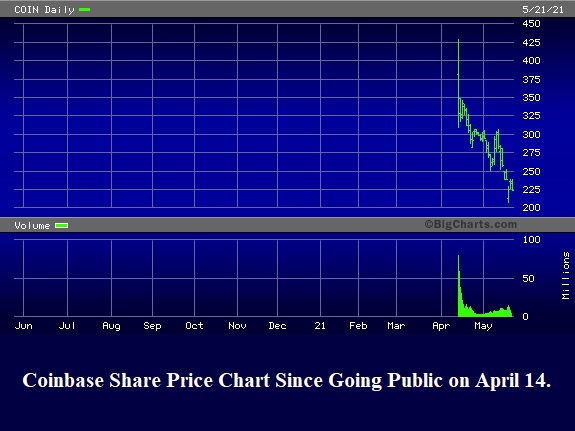 The House Financial Services’ Subcommittee on Investor Protection, Entrepreneurship and Capital Markets will hold a hearing today on the grossly disfigured initial public offering (IPO) process in the U.S. today, which is allowing the rich to get richer as the small retail investor is being effectively looted. The hearing is titled: “Going Public: SPACs, Direct Listings, Public Offerings, and the Need for Investor Protections.”

Coinbase, the cryptocurrency exchange, went public on Nasdaq via a direct listing on April 14. On its first day of trading it closed at a share price of $328.28, giving it a market capitalization of $85.8 billion. In a traditional IPO, early investors and company executives are not allowed to sell their shares for several months due to a so-called lockup period. There’s no such prohibition in a direct listing. According to an SEC filing, Coinbase’s Chairman and CEO, Brian Armstrong, sold 750,000 shares on April 14 at an average share price of $389.10, raising approximately $291,825,000. Since then, Coinbase has been on a steady descent, closing this past Friday at $224.35, a decline of 32 percent in less than two months.

The month prior to Coinbase going public, the Commodity Futures Trading Commission, a federal regulator, levied a paltry $6.5 million fine against Coinbase for the following outrageously manipulative conduct spanning more than three years:

“According to the order, between January 2015 and September 2018, Coinbase recklessly delivered false, misleading, or inaccurate reports concerning transactions in digital assets, including Bitcoin, on the GDAX electronic trading platform it operated. During this period, Coinbase operated two automated trading programs, Hedger and Replicator, which generated orders that at times matched with one another. The GDAX Trading Rules specifically disclosed that Coinbase was trading on GDAX, but failed to disclose that Coinbase was operating more than one trading program and trading through multiple accounts.

“In addition, the order finds that while Hedger and Replicator had independent purposes, in practice the programs matched orders with one another in certain trading pairs, resulting in trades between accounts owned by Coinbase. Coinbase included the information for these transactions on its website and provided that information to reporting services, either directly or through access to its website.

“Reporting firms such as Crypto Facilities Ltd., which publishes the CME Bitcoin Real Time Index, and CoinMarketCap OpCo, LLC, which posts such transactional information on its website, received access to Coinbase’s transactional information via Coinbase’s Application Programming Interface, while the NYSE Bitcoin Index, received it directly in transmissions from Coinbase. According to the order, transactional information of this type is used by market participants for price discovery related to trading or owning digital assets, and potentially resulted in a perceived volume and level of liquidity of digital assets, including Bitcoin, that was false, misleading, or inaccurate.

“The order also finds that over a six-week period—August through September 2016—a former Coinbase employee used a manipulative or deceptive device by intentionally placing buy and sell orders in the Litecoin/Bitcoin trading pair on GDAX that matched each other as wash trades. This created the misleading appearance of liquidity and trading interest in Litecoin. Coinbase is therefore found to be vicariously liable as a principal for this employee’s conduct.”

Despite the fact that Andreessen Horowitz would seem to have a dog in this fight, today’s House hearing will have as one of its witnesses, Scott Kupor, a Managing Partner at the venture capital firm Andreessen Horowitz. You might want to take what he has to say with a grain of salt.

Typically, Democrats, who currently control both houses of Congress, get to pick the majority of witnesses at these hearings. The minority party, currently packed with right-wing Republicans, gets to select at least one witness. We would be inclined to wager that Republicans selected Kupor.

A more unbiased assessment will come from Andrew Park, the Senior Policy Analyst for the Wall Street watchdog, Americans for Financial Reform. According to his written testimony, which has been released by the Subcommittee, Mr. Park will weigh in as follows on the subject of SPACs, those blank-check companies that are also a scheme for the rich to get richer while leaving the retail investor holding the bag:

As for the rich-getting-richer scheme, Mr. Park reveals the following:

The full list of witnesses for today’s hearing is as follows:

The hearing will begin at 12 noon. You can click here to watch the webcast of the hearing.