Severe Dysfunction in Washington and Wall Street Puts the U.S. at Risk of Capital Flight 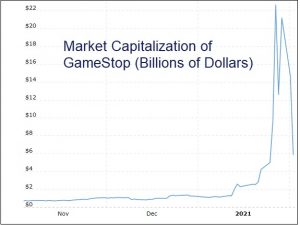 There is recent evidence that the U.S. is already seeing capital flight. According to a January 24 report from the United Nations Conference on Trade and Development, China beat out the U.S. in foreign direct investment inflows last year, receiving $163 billion versus $134 billion for the U.S. That was a radical change from 2019 when the U.S. received $251 billion in foreign direct investment versus $140 billion for China.

Capital flight could accelerate this year if the craziness in Congress and Wall Street continues. Just ask yourself this, would you want to invest in a country that had scenes of a bloody attempted coup of the government featured on the front pages of newspapers around the world? Would you want to risk your savings in a stock market that has ceased to perform its two key functions: a pricing mechanism for the value of companies and efficient allocation of capital to worthy businesses and industries.

It’s not a good sign either when Saturday Night Live’s Cold Open has a better command of what’s going on in the country than the Dow Jones Industrial Average. The most recent SNL looked at “What Still Works” in the U.S. and found that the following is seriously broken:

The vetting of members of Congress as evidenced by Congresswoman Marjorie Taylor Greene’s belief that mass school shootings in Newtown, Connecticut, and Parkland, Florida, were staged, along with Greene’s previously stated belief that the California wildfires were started by “Jewish space lasers.”

The stock market has clearly stopped functioning as an efficient pricing mechanism of value, based on GameStop’s skyrocketing share price last week having no relationship to its sagging business prospects. (GameStop runs brick and mortar video game stores in the middle of a pandemic when people are turning to online shopping in droves);

Breakdowns in rational plans for distributing the COVID-19 vaccine to get control of the pandemic.

Of course, SNL’s job is to give Americans a good laugh at themselves but it’s becoming quite clear that the rest of the world has stopped laughing. Central banks around the world have hundreds of billions of dollars invested in the U.S. stock market and they are clearly watching the ongoing craziness on Wall Street.

GameStop’s whipsawing share price and market cap is a symptom of the multiple diseases infecting the U.S. right now, greed being one of those diseases. GameStop, which is not some over-the-counter, boiler room offering but is actually listed on the New York Stock Exchange, has moved from a market value of $1.23 billion at the beginning of this year to $22.66 billion on January 27 and back down to below $6 billion at yesterday’s close.

And, once again, this dysfunction in the U.S. is being reported in newspapers around the world as Biden’s nominee to head the Securities and Exchange Commission, Gary Gensler, can’t investigate the matter because his Senate confirmation hearing has yet to occur, a full two weeks into the Biden presidency. You can thank Senator Mitch McConnell for that bottleneck in holding up the passage of the Organizing Resolution that allows the new Senate Committee Chairs to take their seats and committee appointments to move forward.