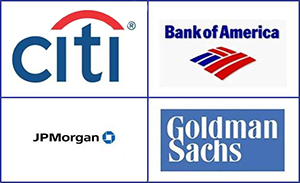 It was only a matter of time until the public perception of the Federal Reserve having to funnel billions of dollars a day to Wall Street banks as an emergency source of liquidity started to impact the share prices of those same banks. It all caught up with the mega banks yesterday as every single one of their stocks closed in the red. Notably, the German bank, Deutsche Bank, that is heavily interconnected to the behemoths of Wall Street through derivatives, lost the most ground yesterday, closing down 2.70 percent at $7.58 – just $1.14 above its all-time low of $6.44 that it set on August 15.

The U.S. banks that were named as being heavily interconnected to Deutsche Bank via derivatives in a 2016 report from the International Monetary Fund (IMF) closed as follows yesterday: Goldman Sachs lost 2.67 percent; Citigroup was down 2.37 percent; Morgan Stanley was off 2.34 percent; Bank of America fell 1.96 percent; while JPMorgan Chase gave up 1.30 percent by the closing bell.

Among the insurers with exposure to Wall Street’s derivatives’ mess, Lincoln National also had a rough day, losing 1.77 percent.

To put the losses by the Wall Street banks and Lincoln National into perspective, the broader stock market as measured by the Dow Jones Industrial Average lost only 0.53 percent yesterday, closing down 142 points at 26,807.77. It’s never a good sign when the banks holding trillions of dollars in Federally insured deposits are losing ground at four times the rate of the broader stock market.

It is also quite notable that Wells Fargo, which is the third largest bank in the U.S. by deposits, fared far better than its peer banks yesterday, losing only 0.63 percent. That further suggests that the selloff was all about derivatives and shaky counterparties since Wells Fargo has the smallest exposure to derivatives among the largest Wall Street banks according to data from the Office of the Comptroller of the Currency.

There is further proof that something is amiss with the largest banks on Wall Street. When the Fed offered its 14-day repo loans yesterday, there was twice as much demand as money offered by the Fed. The banks bid for $62 billion while the Fed was offering only $30 billion.

The Federal Reserve announced last Friday that its repo loan program which began on Tuesday, September 17, has been extended to at least October 10 and likely thereafter in one form or another. The Fed will be pumping out $75 billion daily in overnight repo loans while infusing $30 billion in 14-day term loans two more times this week following its term loan action yesterday.

The Federal Reserve doesn’t announce which banks are taking the loans from the Fed. It could very well be, as was the case during the crash from 2007 to 2010, that a handful of banks are getting the lion’s share of the loans. During the financial crash, Citigroup secretly received over $2.5 trillion in revolving loans from the Fed on top of a massive government bailout from the U.S. Treasury and Federal Deposit Insurance Corporation.

The details of those loans only came into partial clarity when Senator Bernie Sanders tacked an amendment onto the Dodd-Frank financial reform legislation of 2010 requiring an audit of the Federal Reserve’s emergency lending programs by the Government Accountability Office (GAO). The GAO released its audit in 2011, finding that the Fed had made revolving loans of more than $16 trillion to both U.S. and foreign banks. But that figure didn’t include all of the Fed’s bailout programs. Levy Economics Institute released its own report later in 2011, tallying up $29 trillion in secret Fed bailouts during the financial crisis.