Janet Yellen Is Set to Inherit a Helluva Lot of Power, Thanks to Stealthy Changes in the Law 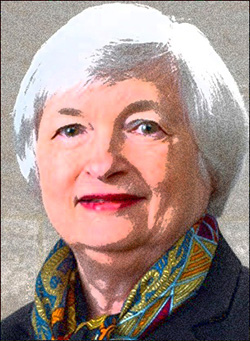 At 10 a.m. tomorrow morning, one day ahead of President-Elect Joe Biden’s inauguration, the Senate Finance Committee will hold the confirmation hearing for Janet Yellen to become the next U.S. Treasury Secretary. In that role, Yellen sits atop a sprawling federal agency that includes the IRS; the Office of the Comptroller of the Currency, which regulates national banks and reports on their hundreds of trillions of dollars in derivatives; the Bureau of Engraving and Printing; the U.S. Mint; the Financial Crimes Enforcement Network (FinCEN) which is tasked with combating money laundering but has failed miserably in the job; and numerous other units.

In addition, legislation passed by Congress puts Yellen in charge of the slush fund known as the Exchange Stabilization Fund; makes her the Chair of the Financial Stability Oversight Council, and, thanks to stealthy legislation passed during the Trump administration, the Treasury Secretary is now a permanent member of the National Security Council (NSC).

The National Security Council was created in 1947. For the next 70 years the Treasury Secretary was invited to sit on the NSC at the invitation of the President. Donald Trump’s Treasury Secretary, Steve Mnuchin, who came to that role after serving as National Finance Chairman of Trump’s presidential campaign, became the first Treasury Secretary to be a permanent part of the NSC thanks to a provision added to the 2018 Foreign Investment Regulatory Review Modernization Act. That provision is now codified into law at 50 U.S. Code § 3021.

The change in the law governing the NSC was discussed by Robert M. Kimmitt, a lawyer at the big corporate law firm, WilmerHale, last Friday via a column for Bloomberg Law. We could find no news article carried by mainstream media on the change in the law in 2018, or since then.

As Wall Street On Parade reported recently, as a result of the 2010 Dodd-Frank financial reform legislation, the Treasury Secretary is also permitted to take the Federal Reserve hostage during a financial crisis. Section 1101 of the Dodd-Frank Act provides that the Federal Reserve Board, “may not establish any program or facility under this paragraph without the prior approval of the Secretary of the Treasury.” The referenced paragraph pertains to the Fed’s ability to enact emergency lending facilities during a financial crisis. In other words, assuming Yellen is confirmed, the Federal Reserve must now say “may I” to a Cabinet Secretary in the Executive Branch before implementing any new emergency lending programs. So much for Fed independence. (For how that worked out in the Trump administration, see 75% of the $454 Billion CARES Act Money Never Went to the Fed; It Was Invested by a Mnuchin Slush Fund Called the ESF.)

That’s a helluva lot of power for Janet Yellen – especially since she has received millions of dollars in speaking fees from the felon banks on Wall Street since stepping down as Fed Chair in February of 2018, when she failed to get renominated as Fed Chair by Trump.

Yellen’s financial disclosure form was made public at the end of December. It shows that since leaving the Fed in February of 2018, she has made more than $8 million in speaking fees with $5 million of that coming from Wall Street related firms, including the largest banks supervised by the Fed. Yellen, cleverly, lists the exact amounts in speaking fees she received for years 2019 and 2020 but for her speaking gigs in 2018, the year in which she would have been most in demand as the newly retired Fed Chair, she simply states that the firms provided $5,000 or more.

One of the firms that paid Yellen speaking fees in 2018 was JPMorgan Chase. Just how much that bank paid Yellen is a critical matter. That’s because JPMorgan Chase is not only the largest bank in the U.S. but it has also racked up the largest number of felony counts of any U.S. bank, all brought by the Department of Justice and all admitted to by the bank.

At the time of Yellen’s speaking engagements at JPMorgan Chase in 2018, it had three felony counts, two in 2014 for its facilitation of the Bernie Madoff Ponzi scheme and one in 2015 for its role with other banks in rigging the foreign exchange market. Last year, JPMorgan Chase was hit with two more felony counts. The latest felony counts involved “tens of thousands of episodes of unlawful trading in the markets for precious metals futures contracts” and “thousands of episodes of unlawful trading in the markets for U.S. Treasury futures contracts and in the secondary (cash) market for U.S. Treasury notes and bonds,” according to the Justice Department. (Not to place too fine a point on it, but the Treasury market is the very market that will be overseen by the Treasury Secretary.)

As is typical with JPMorgan Chase, last year the bank agreed to pay a big fat fine and was given another Deferred Prosecution Agreement and put on probation. (Based on committing five felony counts in a span of six years, probation would not seem to be working.)

The Federal Reserve, where Yellen sat as a Governor since 2010 and as Chair from 2014 to February 3, 2018, was the supervisor of JPMorgan Chase’s bank holding company. At no time during its serial crime spree did the Fed ask the Board of JPMorgan Chase to replace its Chairman and CEO, Jamie Dimon. Instead, the Fed has insanely entrusted $2 trillion of its mortgage-backed securities to JPMorgan Chase to oversee as custodian. That contract was first consummated on December 31, 2008 as part of the Fed’s quantitative easing program. The contract was updated on January 30, 2017 and continues to this day. (We confirmed that fact with the New York Fed.)

If the Biden administration wants to usher in a new era of honesty and transparency with the American people, it will instruct Yellen to make public all of her speaking fees and corporate compensation since she left the Chairmanship of the Fed on February 3, 2018, and do it in advance of the confirmation hearing set for tomorrow.