The Stock Market Is Broken as a Bellwether; Here’s How to Fix It 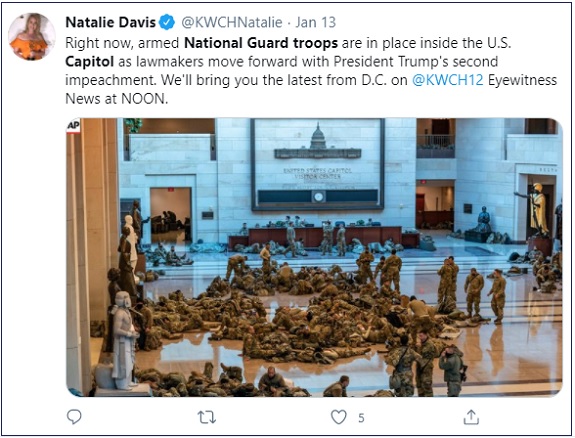 I sat behind a trading terminal at two Wall Street firms from 1986 to 2006. I can assure you that if the President of the United States was refusing to accept the outcome of a presidential election and urging a coup d’é·tat by his civilian militia, the stock market would have sold off by double digits. This era’s stock market has yawned at the spectacle.

I can further assure you that if an actual, violent coup d’état did occur inside the halls of Congress and played out in real time on every television network and cable news program in the country and around the world, there would have been a crash in the stock market. (I was sitting behind my trading terminal on October 19, 1987 when the Dow Jones Industrial Average crashed 22 percent by the end of the trading day and the country was peaceful.)

The stock market of that prior era would not have greeted 20,000 National Guard troops descending on the nation’s Capitol and television pictures of hundreds of those troops guarding the halls of Congress with a meaningless loss of 8 points — a tiny fraction of one percent. 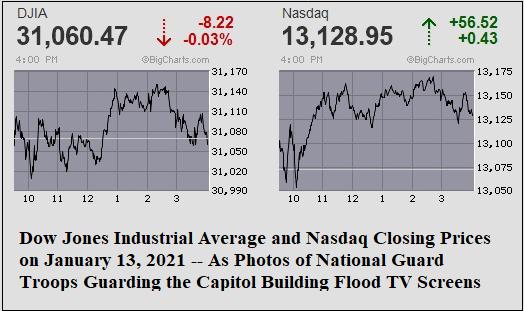 So how do we fix our broken stock market so that it is once again a barometer to lead the country in the right direction? We listen to our whistleblowers who love their country so much that they will put their careers on the line to blow the whistle on all that is wrong on Wall Street.

The pint-sized Carmen Segarra had the guts to sneak a tiny tape recorder into the New York Fed to blow the whistle on the crony relationship between the Federal Reserve Bank of New York and Goldman Sachs. Segarra was an attorney and bank examiner at the New York Fed but when she attempted to write a negative report on Goldman Sachs, she was fired. (See The Carmen Segarra Case: Welcome to New York, Wall Street and McJustice.) The New York Fed has yet to be reformed. Instead, it has become an unlimited money spigot to cover up the travesties on Wall Street while being, literally, owned by the largest Wall Street banks.

Since 2006, no less than four career attorneys at the Securities and Exchange Commission have explained how the SEC has become a captured regulator and no longer a force for good. Three of those whistleblowers went public; one filed an anonymous letter.

In March 2014, a 28-year attorney at the SEC, James Kidney, used the occasion of his retirement party to deliver a speech blasting the leadership of this failed watchdog. Kidney said the leadership at the SEC was policing “the broken windows on the street level” while ignoring the “penthouse floors.” Kidney explained that “On the rare occasions when enforcement does go to the penthouse, good manners are paramount. Tough enforcement – risky enforcement – is subject to extensive negotiation and weakening.” News of the speech went viral.

Later in 2014, The American Lawyer published excerpts from 2,000 pages of documents it had obtained from the SEC under a Freedom of Information Act (FOIA) request. The documents revealed that Kidney had advocated for the SEC to investigate higher ups in the Goldman Sachs Abacus 2007-AC1 mortgage securitization investment swindle. In that case, Goldman Sachs knew that Abacus was designed to fail because it had allowed a hedge fund, John Paulson & Co., to help assemble the mortgages and bet against them. Despite this knowledge, Goldman sold the Abacus deal as a good investment to its clients. Investors lost approximately $1 billion while the Paulson hedge fund profited by about the same amount. The SEC brought charges against a lowly salesman in the deal, Fabrice Tourre, while letting higher ups off the hook and settling with Goldman for $550 million.

It wasn’t that the SEC didn’t know what Paulson had done. The SEC said this in its charging document: “The SEC alleges that one of the world’s largest hedge funds, Paulson & Co., paid Goldman Sachs to structure a transaction in which Paulson & Co. could take short positions against mortgage securities chosen by Paulson & Co. based on a belief that the securities would experience credit events.” The meaning of “credit events” is that Paulson had good reason to believe the mortgages would default or get credit rating downgrades, delivering windfall profits to him.

Adding to the Orwellian nature of all of this, as the details of this scam were making headlines, the 2010 Spring/Summer issue of the Alumni Magazine for the Stern School of Business at New York University carried a tribute to John Paulson for his $20 million gift to the school. The article indicated that the School had named its first-floor lobby of Tisch Hall as well as the School’s auditorium in Paulson’s honor. Young minds at NYU would now be influenced to believe that cheating your way to profits is not just admirable but worthy of engraved recognition.

On June 28, 2006, Gary Aguirre, a former SEC attorney, testified before the U.S. Senate on the Judiciary. During his final days at the SEC, Aguirre had wanted to serve a subpoena on John Mack, a top executive at Morgan Stanley. Aguirre wanted to take testimony about Mack’s potential involvement in insider trading. Instead of being allowed to speak to Mack, Aguirre was fired through a phone call while he was on vacation. Aguirre testified to the Senate committee that the SEC had thrown a “roadblock” in his investigation because the suspected insider trader had “powerful political connections.”

Yet another SEC lawyer, Darcy Flynn, told Congressional investigators and the SEC Inspector General in 2011 that for at least 18 years, the SEC had been shredding documents and emails related to its investigations — documents that it was required to preserve under law. Flynn told investigators that by purging these important documents, the SEC’s ability to see the connections between related frauds had been compromised. To put it another way, the SEC has intentionally been operating in the dark for almost three decades. (There is other evidence to suggest that’s a feature, not a bug at the SEC.)

On September 27, 2011, the SEC Inspector General released a report revealing that an anonymous attorney at the SEC had sent a letter to the Inspector General, blowing the whistle on the former SEC Director of Enforcement, Robert Khuzami. The whistleblower was challenging the integrity of Khuzami’s handling of charges that Citigroup executives had intentionally misled public investors about its exposure to subprime mortgages, understating the amount by $37 billion in the fall of 2007. According to the Inspector General’s report, the whistleblower alleged the following:

“…just before the staff’s recommendation was presented to the Commission, Enforcement Director Robert Khuzami had a ‘secret conversation’ with his ‘good friend’ and former colleague, a prominent defense counsel representing Citigroup, during which Khuzami agreed to drop the contested fraud charges against the second individual. The complaint further alleged that the Enforcement staff were ‘forced to drop the fraud charges that were part of the settlement with the other individual,’ and that both individuals were also represented by Khuzami’s friends and former colleagues, creating the appearance that Khuzami’s decision was ‘made as a special favor to them and perhaps to protect a Wall Street firm for political reasons.’ ”

The Inspector General’s report essentially dismissed the whistleblowers’ allegations, sending a further message to the decent, hardworking career attorneys at the SEC that speaking out is a waste of time or might even get you fired.

Adding to this corrupt, broken stock market is the trading infrastructure itself. What kind of a fair and efficient market would permit the mega banks on Wall Street to operate their own Dark Pools, which are effectively internal stock exchanges with little to no real time transparency. Or how about the New York Stock Exchange itself, which allows these same Wall Street banks to get faster access to trading movements by paying tens of thousands of dollars to locate their computers next to the Exchange’s computers. We could go on and on but you get the picture.

Americans desperately need and deserve a truly independent commission, with subpoena power, and one that takes testimony under oath, to engage in an in-depth study of the corrupted structure of the U.S. stock market with detailed recommendations for reform.