The Untold Story of How the Republican Attorneys General Association, Funded with Large Sums from Corporate Felons, Including OxyContin Drug Pusher Purdue, Participated in Recruiting the Mob that Attacked the Capitol 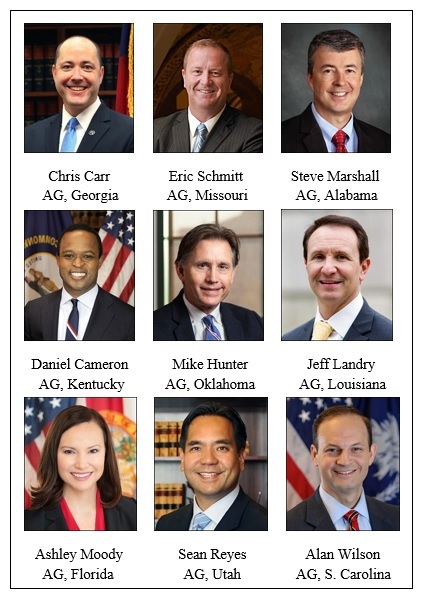 If there was ever a DEFCON 1 warning to Americans that campaign finance reform must be a top priority of the incoming President Biden administration, it is the cautionary tale of the Republican Attorneys General Association (RAGA) and their recruitment efforts of the mob that descended on the Capitol of the United States on January 6. Five people are now dead from that siege, including a Capitol Police officer, and dozens injured. The U.S. Attorneys office for Washington, D.C. has also confirmed that two live pipe bombs with timers were found in front of the Republican National Committee and Democrat National Committee, both located near the Capitol.

When one thinks of a group with the word “Association” in their name, it invokes the idea that this is a fraternal organization or a trade association. What doesn’t come to mind is that it is a campaign financing group to elect Republican Attorneys General – the highest law enforcement officer in a state – by taking vast sums of money from the very companies committing crimes in those states. But that is what RAGA has been doing for many years now.

“The Republican Attorneys General Association (RAGA) is the only national organization whose mission is electing Republicans to the Office of State Attorney General (AG). RAGA collaborates with our current Republican attorneys general and recruits outstanding candidates, providing them assistance with research, message development, and financial support.”

The day after the attack on the nation’s Capitol, Jamie Corey at the watchdog group, Documented, released an audio tape of robo calls being made by a unit of RAGA. The robo call message went like this:

“I’m calling for the Rule of Law Defense Fund with an important message. The ‘March to Save America’ is tomorrow in Washington D.C. at the Ellipse in President’s Park between E St. and Constitution Avenue on the south side of the White House, with doors opening at 7:00 a.m. At 1:00 p.m., we will march to the Capitol building and call on congress to stop the steal. We are hoping patriots like you will join us to continue to fight to protect the integrity of our elections. For more information, visit MarchtoSaveAmerica.com. This call is paid for and authorized by the Rule of Law Defense Fund, 202-796-5838.”

By January 5, the date of the above robo calls to potentially thousands of people urging them to “stop the steal,” there was no evidence of any significant election fraud. No one was in a better position to know that as a fact than the State Attorneys General who had just watched their states certify the votes in early December. In addition, William Barr, the Attorney General of the United States who was selected for that position by Donald Trump, told the media on December 1 that the Justice Department had uncovered no evidence of widespread voter fraud that would have changed the outcome of the presidential election.

The Executive Committee of RAGA includes Attorneys General from nine states (see above graphic). Its Chairman is Chris Carr, Attorney General of Georgia. For RAGA to participate in fomenting a riot at the Capitol on incendiary information it knew to be false demands a thorough and formal FBI and Congressional investigation. RAGA has thrown a bone to the media by firing its Executive Director, Adam Piper. But the entire structure of RAGA needs deep scrutiny.

The Rule of Law Defense Fund is the dark money fundraising arm of RAGA and located at the same address and suite number as RAGA according to its IRS filings. Both the Rule of Law Defense Fund and RAGA were at varying times listed as “Coalition Partners” on websites set up to promote the January 6 event. While many of these websites have been taken down, we were able to access them at the Internet Archives’ Wayback Machine, which captures website content on past dates. Website names used to promote the January 6 event include: TrumpMarch.com, MarchtoSaveAmerica.com, and WildProtest.com, among others. The obvious question, of course, is why would State Attorneys General want to associate themselves as a Coalition Partner with a group calling itself WildProtest.com, not to mention a false claim of a stolen election.

The WildProtest.com website told its readers this on the day before the event:

“We the People must take to the US Capitol lawn and steps and tell Congress #DoNotCertify on #JAN6! Congress cannot certify this fraudulent Electoral College. Our presence in Washington D.C. will let Members of Congress know that we stand with Rep. Mo Brooks and his colleagues in the House of Representatives who will bravely object to the certification of the Electoral College. We’re in need of at least one Senator. We’ve identified six (seven including Senator-elect Tommy Tuberville) that could join our cause. StopTheSteal.us is working closely, whipping the vote up, with patriots in the Congress.”

Yesterday, 34 Democrats in the House of Representatives signed a letter asking for an investigation by the Capitol Police and Sergeant of Arms in the House and Senate into unnamed persons giving potentially “reconnaissance” tours in the Capitol building the day before the attack. The letter states that on the day before the attack, January 5, “there were unusually large groups of people throughout the Capitol who could only have gained access to the Capitol Complex from a Member of Congress or a member of their staff.”

The Rule of Law Defense Fund is structured as a dark money, tax exempt 501(c)(4) group so that its donors can remain anonymous. Each year it provides hundreds of thousands of dollars to RAGA, in part to pay large salaries.

Exactly why RAGA needs a dark money group is hard to say. RAGA itself is accepting millions of dollars a year in contributions from some of the creepiest corporations in America, including those that have admitted to multiple felony counts brought by the U.S. Department of Justice.

RAGA is structured as a 527 tax-exempt organization that is allowed to raise unlimited funds from individuals and corporations. The IRS requires that it file an 8872 form each quarter showing its contributions and expenditures. We’ve spent this week looking at those forms. It’s not a pretty picture.

Purdue Pharma has given more than $570,000 to RAGA in just the three-year span between 2015 and 2017. In 2007, Purdue Pharma was fined $600 million by the U.S. Department of Justice on charges that it “illegally marketed and promoted OxyContin by falsely claiming that OxyContin was less addictive, less subject to abuse and diversion, and less likely to cause withdrawal symptoms than other pain medications — all in an effort to maximize its profits.” The company clearly viewed that as a slap on the wrist. Last October, the Justice Department brought three felony charges against Purdue and $8 billion in fines. At the time of last year’s announcement by the Justice Department, Tim McDermott of the Drug Enforcement Administration said this: “This resolution closes a particularly sad chapter in the ongoing battle against opioid addiction. Purdue Pharma actively thwarted the United States’ efforts to ensure compliance and prevent diversion. The devastating ripple effect of Purdue’s actions left lives lost and others addicted.”

RAGA seems to have a fondness for companies addicting young people. Reynolds American, whose cigarette brands include Camel, Newport, Pall Mall and others, has given more than $400,000 to RAGA since 2014. Altria, parent of Philip Morris, whose brands include Marlboro, Parliament, Benson & Hedges, Virginia Slims and others, has enriched RAGA to the tune of $484,154 since 2014.

In 1999, the U.S. Department of Justice sued Philip Morris, Reynolds and seven other large tobacco companies under the Racketeer Influenced and Corrupt Organizations Act (RICO). The government charged that the tobacco companies engaged in a 40-year conspiracy to mislead the public about the dangers of smoking, distort the dangers of secondhand smoke, and target the youth market as “replacement smokers.” In 2006, following a nine-month trial, Judge Gladys Kessler of the U.S. District Court for the District of Columbia issued a 1,683 page opinion.  The Court found that “Cigarette smoking causes disease, suffering, and death.”

When we saw Big Tobacco was funding RAGA, we knew fossil fuel companies would be there also. Indeed they were, to the tune of hundreds of thousands of dollars from Koch Industries and Anadarko Petroleum. Why did we know that fossil fuel companies would be donating if Big Tobacco was funding RAGA? Because the makeup of RAGA’s donors looks very much like donors to a Koch brothers’ front group called Citizens for a Sound Economy (CSE), a 1984 group founded by the late David Koch of Koch Industries and Richard Fink, a former professor of economics at George Mason University, who had a long career at Koch Industries beginning in 1990.

In 2013 the health professionals’ journal, Tobacco Control, published a comprehensive report funded by the National Institute of Health (NIH), a federal agency. The report was titled ‘To Quarterback Behind the Scenes, Third Party Efforts’: The Tobacco Industry and the Tea Party.

The report explains that Citizens for a Sound Economy, which split into the Koch-funded Americans for Prosperity (a big funder of the Tea Party movement) and FreedomWorks in 2004, “supported the agendas of the tobacco and other industries, including oil, chemical, pharmaceutical and telecommunications, and was funded by them.” The report indicates that between 1991 and 2002, Philip Morris and other tobacco companies gave CSE at least $5.3 million.

Philip Morris and other tobacco companies launched an offensive in 1994 and 1995, using nonprofit front groups including CSE, to undermine the credibility of the Food and Drug Administration (FDA) which was attempting to regulate second-hand smoke. One Philip Morris memo in late 1994 indicated that CSE and other front groups were working “to define the FDA as an agency out of control and one failing to live up to its congressional mandate regarding regulation of drugs and medical devices.”

As we have previously reported, Koch Industries and its front group, Freedom Partners, have played a central role in the Trump administration. See our report here.

An IRS public tax filing by the Wellspring Committee for tax year 2016 shows that it received a whopping $32 million (more than three times its prior year’s income) in dark money. According to MapLight, $28.5 million of the $32 million came from a single, anonymous donor. In 2016, Wellspring took 72 percent of its annual income and gave it to the Judicial Crisis Network, a stunning $23,454,997. In turn, the next year, 2017, the Judicial Crisis Network handed a whopping $2.9 million in a single year to RAGA. (What kind of Attorneys General group would accept $2.9 million and have no idea from whom the money was actually coming?)

The Center for Responsive Politics has connected Wellspring to Charles Koch’s network, writing: “Since Wellspring’s birth from a short-lived union of the Koch network and GOP political operatives leading up to the 2008 election, it has accounted for more than 90 percent of JCN’s [Judicial Crisis Network’s] total funding.” Charles Koch is the billionaire Chairman and CEO of the fossil fuels juggernaut, Koch Industries, one of the largest private corporations in the world, with vast interests in oil, refineries, chemicals, paper and trading.

JPMorgan Chase had donated more than $86,000 to RAGA since 2017. In the span of the last six years, JPMorgan Chase has pleaded guilty to six felony counts. Throughout that period, its Board has allowed its Chairman and CEO, Jamie Dimon, to keep his job. Dimon’s annual compensation is now $31.5 million.

Citigroup has just one felony count, to which it has admitted guilt, but its long rap sheet strongly suggests a criminal enterprise. See our 2017 report: A Private Citizen Would Be in Prison If He Had Citigroup’s Rap Sheet. Since 2014, Citigroup and its subsidiaries have donated $331,745 to RAGA.

If we step back and look through a wider lens at the mob attack on the Capitol on January 6, and delve deeply into the money and groups involved, it becomes a screaming battle cry to reform campaign financing and dark money groups in America.