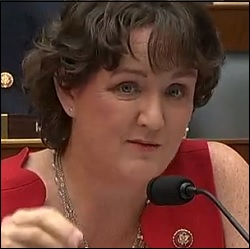 Sparks were flying throughout yesterday’s House Financial Services Committee hearing. After Fed Chair Jerome Powell and U.S. Treasury Secretary Steve Mnuchin appeared before the Senate Banking Committee on Tuesday, they were grilled for 2 more hours yesterday by members of the House Financial Services Committee. The atmosphere was far less cordial than the prior day, which wasn’t exactly tea and crumpets either.

There was good reason for the hostility. For the second time in a dozen years, another former Goldman Sachs banker holds the reins at the Treasury Department as it bails out Wall Street while crushing Main Street businesses and American families. This time it’s Mnuchin rather than Hank Paulson, who served as Treasury Secretary under George W. Bush during the financial crisis.

Before we get into the guts of yesterday’s hearing, it’s important to have the background on how Wall Street was bailed out and Main Street was sold out the last time around – as the parallels are downright eerie.

During the financial crisis of 2007 to 2010, the Federal Reserve, without any oversight or even awareness by Congress, secretly funneled a cumulative $29 trillion into Wall Street bailout programs. One of the same programs the Fed is using today, the Primary Dealer Credit Facility (PDCF), secretly funneled $8.95 trillion in cumulative loans to teetering Wall Street and foreign banks, much of that at interest rates below 1 percent interest. Two-thirds of that $8.95 trillion went to just three Wall Street trading houses: Citigroup, Morgan Stanley and Merrill Lynch. (See Table 9 and Figure 11 in above link.)

The Fed then battled in court for years to keep its outrageous hubris a secret from the American people after being sued by the business media for the details of its lending programs. Only in 2011, after the Fed lost its court battles and Senator Bernie Sanders and others tacked an amendment on to the Dodd-Frank Act requiring a GAO audit of the Fed’s emergency lending programs did the public finally learn the truth.

The harsh reality was that millions of struggling consumers had been foreclosed on by Citigroup (using an alias) and forced to pay high double-digit interest rates on their Citi credit cards, while the Fed had given that insolvent bank $2.5 trillion in cumulative loans as the bank lied to the public about its financial condition. Other major Wall Street banks also continued to charge high double-digit interest rates to consumers on their credit cards and engaged in illegal foreclosures as they were being secretly bailed out by the Fed.

And, it wasn’t that the Fed was simply cleaning up other federal regulators’ failures to properly supervise these banks. The Fed was a supervisor of the Wall Street bank holding companies. The Fed then outsourced that work to the New York Fed. For how that worked out, see As Citigroup Spun Toward Insolvency in ’07- ’08, Its Regulator Was Dining and Schmoozing With Citi Execs. For a look at how little has changed at the New York Fed today, see The New York Fed, Pumping Out More than $9 Trillion in Bailouts Since September, Gets Market Advice from Giant Hedge Funds.

The man who sat at the helm of the hubristic New York Fed at the time of the financial crisis was Timothy Geithner. He knew where the bodies were buried in terms of which financial institutions were hiding the severity of their situation. Some invisible hand on Wall Street decided Geithner should become President Obama’s Treasury Secretary, and so he was.

Geithner’s laser-like focus was on bailing out the banks. American families that were financially crippled by the crisis – not so much. As Senator Bernie Sanders stated after the details of the Fed’s trillions of dollars in bailouts to Wall Street became public knowledge: “This is a clear case of socialism for the rich and rugged, you’re-on-your-own individualism for everyone else.”

The degree of contempt and cruelty that this Wall Street gang of captured regulators had toward struggling Americans living through the worst financial crisis since the Great Depression was revealed in Neil Barofsky’s book — Bailout: An Inside Account of How Washington Abandoned Main Street While Rescuing Wall Street. Barofsky was the Special Inspector General of the Troubled Asset Relief Program (TARP), another Wall Street bailout program during the last financial crisis.

According to Barofsky, the Home Affordable Modification Program (HAMP) did not have a goal of keeping struggling families and children in their homes.  Its real goal, according to Geithner, was to “foam the runway” for the banks.

Barofsky shares this in his book:

“A lightbulb went on for me.  Elizabeth had been challenging Geithner on how the program was going to help home owners, and he had responded by citing how it would help the banks. Geithner apparently looked at HAMP as an aid to the banks, keeping the full flush of foreclosures from hitting the financial system all at the same time. Though they could handle up to ‘10 million foreclosures’ over time, any more than that, or if the foreclosures were too concentrated, and the losses that the banks might suffer on their first and second mortgages could push them into insolvency, requiring yet another round of TARP bailouts. So HAMP would ‘foam the runway’ by stretching out the foreclosures, giving the banks more time to absorb losses while the other parts of the bailouts juiced bank profits that could then fill the capital holes created by housing losses.”

Perhaps you should read the above paragraph one more time and then consider this. Without swift and comprehensive action from Congress, the eviction moratorium is going to end and an unprecedented wave of evictions and foreclosures will begin – in the middle of a health crisis and pandemic. That will give all of those hedge funds owned by the billionaires on Wall Street a second opportunity, as they did following the last financial crisis, to buy up the foreclosed homes on the cheap and then rent them out to struggling families at high rents.

Congresswoman Cynthia Axne from Iowa told Powell and Mnuchin this:

“As we all know, we are in dire straits right now. Iowa has now had increasing unemployment claims for six straight weeks. I would like to remind everybody that we need to pay attention to the level of unemployment, not just the direction. This is all happening when you see initial claims higher than we saw in the Great Recession – that’s 36 weeks in a row where we’ve seen record unemployment claims across this country. Meanwhile, the Century Foundation recently estimated 12 million people would lose their unemployment benefits the day after Christmas if we don’t act. That seems very terrible for this country.”

Axne asked Powell what the economic impacts would be if the Congress fails to pass a new stimulus bill and extend unemployment benefits. Powell said that “the unemployment rate for people in the bottom [income] quartile is about 20 percent still. And those are people with relatively low savings, low wealth and we would be concerned that they’d be vulnerable to losing their houses or their rental and just be in a very difficult place.”

“One in eight Americans is going hungry. Three million businesses have closed and we’re approaching 100,000 people now hospitalized with COVID…”

Much anger was directed at Treasury Secretary Mnuchin’s plan to keep four of the Fed’s programs benefitting Wall Street open into 2021 (including the insidious Primary Dealer Credit Facility which was resurrected again by the Fed) while shutting down other Fed programs by the end of the year, including the Main Street Loan Facility and Municipal Liquidity Facility which were set up to help small and mid-size businesses and local and state municipal bond lending. Mnuchin is also demanding the return of unused monies by the Fed that came from the taxpayer. Under the stimulus plan passed by Congress in March, the CARES Act, Mnuchin had to give his approval for any Fed program using CARES Act money.

The most heated exchange occurred between Congresswoman Katie Porter of California and Mnuchin. Porter has a Harvard Law Degree and was previously a law professor at the University of California Irvine School of Law. Porter challenged Mnuchin on his stance that the CARES Act legally requires him to shut down these programs and demand the remaining money back from the Federal Reserve. (Mnuchin has only a Bachelor’s Degree.) You can watch the fiery exchange between Porter and Mnuchin at the video clip below.

Congresswoman Maxine Waters, Chair of the House Financial Services Committee, noted that the Fed’s own FOMC minutes, for its meeting held on November 4-5, had indicated that the majority view was that the emergency facilities should be extended. The actual minutes read as follows:

“With regard to funding risks, the staff highlighted that structural vulnerabilities in markets for short-term funding and corporate bonds remained present. Emergency facilities were viewed as critical in restoring market functioning and continued to serve as important backstops.”

Another portion of the FOMC minutes carried this assessment:

“A few [FOMC] participants noted that the financing conditions for small businesses were especially worrisome, as the PPP had ended and the prospect for additional fiscal support remained uncertain. They pointed to the most recent Census Bureau Small Business Pulse Survey, in which more than half of the respondents reported having no more than two months of cash on hand.”

Congressman Michael San Nicolas, who represents Guam, called attention to another way that the Fed’s programs have favored Wall Street while disadvantaging everyday Americans. San Nicolas correctly noted that the Fed’s corporate lending facilities don’t require that the corporations have an investment grade rating but that its Municipal Liquidity Facility for local governments and states mandate an investment grade rating.

The only question now is how long it will be before we see the Occupy Wall Street crowd back in the streets chanting “Banks got bailed out, we got sold out.”

The one percenters should now be worrying about what venture capitalist Nick Hanauer was worrying about in Politico Magazine back in 2014. This is what he wrote: