Fed Chair Powell Attempts to Blame U.S. Inequality on Globalization – Gets Smacked Down by Bloomberg Reporter 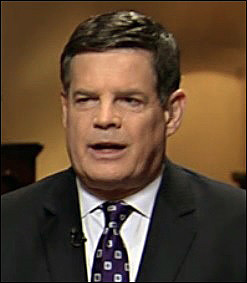 Federal Reserve Chairman Jerome Powell’s press conferences are typically snooze sessions. Yesterday’s virtual press conference got off to a similar start with mainstream media reporters asking about inflation and monetary policy instead of the more critical questions they should have been asking in the midst of the worst labor market and business closures since the Great Depression and food pantry lines that stretch for blocks.

Fortunately, two reporters shook things up at the very end of the press conference. Nancy Marshall-Genzer of Marketplace, which airs on public media stations, bluntly asked Powell this: “Is there more the Fed could do to deal with inequality, for example, use the Black unemployment rate as a benchmark.”

Powell’s answer was an abomination. First Powell stated that inequality is not related to monetary policy. Next, he decided to target a more specific villain – globalization, saying this: “Globalization called for rising skills and aptitudes and education and U.S. educational attainment kind of flattened out, certainly relevant to our peers….” Powell said that has a lot to do with stagnant wages in the U.S.

The reporter that followed Marshall-Genzer, Michael McKee of Bloomberg TV, challenged Powell on his answer, stating this:

McKee: “Inequality is not just about wages. It’s also about wealth and a number of studies have suggested that by keeping rates low for so long and targeting the markets after the Great Financial Crisis, that the Fed did contribute to wealth inequality in this country. And I’m wondering if you think there is some tweak or some message that you could give that would affect that?”

Powell did not answer the question directly but gave a meandering answer on the role of the Fed. Powell has a poker “tell.” When he knows his answer is disingenuous, he starts repeatedly clearing his throat. He did a lot of that while bumbling through his non-answer to McKee’s question.

The truth of what the Fed has done to dramatically exacerbate inequality in the United States goes well beyond its artificial manipulations to keep interest rates at the zero bound. But we’ll start with that.

This decade of unprecedentedly low interest rates deprived savers (people who cannot afford the risk of the stock market) of the 4 and 5 percent interest they had been able to earn on safe instruments like Treasury notes and federally-insured Certificates of Deposit before the financial crisis. Millions of Americans had to start depleting savings in order to make ends meet.

That prolonged Fed monetary policy has impoverished millions of Americans. It has, on the other hand, enriched the top 10 percent of the richest Americans because that’s who owns 85 percent of the stock market.

Stock prices are positively influenced by super low interest rates because it makes their dividend yields, typically two or three percent on blue chip stocks, more attractive to those seeking income. Conversely, that is why the stock market sells off when the Fed goes on a path of raising interest rates (called “tightening” in Fed lingo).

One of the men who has benefitted dramatically from the booming stock market over the past decade is Jerome Powell himself. According to his previous and most recent financial disclosure form, he has tens of millions of dollars invested in the stock market.

But the Fed is in charge of a lot more than monetary policy. It’s the supervisor of the largest bank holding companies in America, which also dominate Wall Street trading. These include JPMorgan Chase, Bank of America, Wells Fargo, Citigroup, Goldman Sachs, and Morgan Stanley.  The Fed has stood down for more than a decade and watched these firms rip-off struggling Americans – dramatically increasing the level of wealth inequality in the United States. The nonprofit watchdog, Better Markets, perfectly captured this in an April 2019 report titled: “Wall Street’s Six Biggest Bailed-Out Banks: Their RAP Sheets & Their Ongoing Crime Spree.”

Another timely example of how the Fed is exacerbating wealth inequality in the United States is the hundreds of billions of dollars in repo loans it is making weekly to Wall Street trading firms at the unheard of interest rate of 1/10th of one percent. This rate has been in effect for these loans since the middle of March. These firms could do nothing more complicated than re-loan this money out as margin loans to hedge fund traders and make effortless, windfall profits.

But struggling consumers are still being forced to pay the bank parents of these trading firms upwards of 17 percent interest or more on their credit cards. Why isn’t Jerome Powell using his bully pulpit to call for banks to pass along their savings on borrowing costs from the Fed by lowering credit card rates to consumers?

Why has the Fed loaned out more than $9 trillion cumulatively since September 19, 2019 to these Wall Street trading houses while the country is still waiting for the first loan to be made by the Fed to the Main Street Lending Facility?

Jerome Powell has good reasons to be struggling for the right words and clearing his throat.

Fed Chair Powell Has Upwards of $11.6 Million Invested with BlackRock, the Firm that Will Manage a $750 Billion Corporate Bond Bailout Program for the Fed