The Fed Just Pulled Off Another Backdoor Bailout of Wall Street 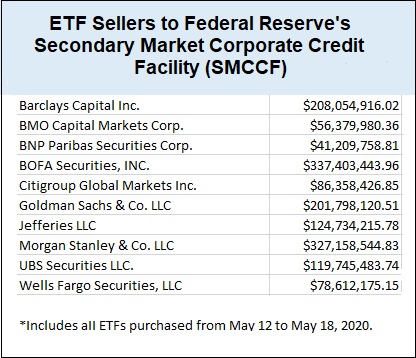 The Federal Reserve has authorized 11 financial bailout programs thus far. Despite Fed Chairman Jerome Powell’s reassurances at his press conferences that these programs are to help American families, a full 10 of these programs are actually bailouts of Wall Street banks or their trading units.

The latest Wall Street bank bailout to come out of hiding is the Fed’s Secondary Market Corporate Credit Facility (SMCCF). This program was supposed to buy up corporate bonds in the secondary market in order to help corporate bond markets regain liquidity. Thus far, the only thing the SMCCF has bought up are Exchange Traded Funds (ETFs) holding investment grade and junk-rated bonds.

The SMCCF program began operations on May 12. By May 18 the Fed had spent $1.58 billion buying up ETFs. The ultimate goal of the facility, at this point, is to spend $250 billion on ETFs and secondary market corporate bonds. The U.S. Treasury Department was supposed to hand over $25 billion of taxpayer money to eat losses on the SMCCF program. Instead, without explanation, the latest data from the Fed shows that the Treasury deposited $37.5 billion into the SMCCF, suggesting the program is expecting losses of greater than $25 billion.

The bulk of the purchases of ETFs were those issued by BlackRock, the company to whom the New York Fed has outsourced the program. The Fed is allowing BlackRock to buy up its own, previously sinking, ETFs as well as those of other ETF issuers. The New York Fed gave BlackRock a no-bid contract to run the program as investment manager. But that’s far from the only outrage.

Here’s where you need to pay close attention. The Fed released a list of the Wall Street firms that are selling these ETFs to the Fed’s bailout facility. (See chart above.) The majority of the sellers just happen to be the very same firms that create these ETFs under the title of “Authorized Participants.”

We’ll let James Chen of Investopedia explain what function “Authorized Participants” perform for an ETF. He writes as follows:

“Authorized participants (AP) are one of the major parties at the center of the creation and redemption process for exchange-traded funds (ETF). They provide a large portion of liquidity in the ETF market by obtaining the underlying assets required to create a fund. When there is a shortage of shares in the market, the authorized participant creates more. Conversely, the authorized participant will reduce shares in circulation when supply [exceeds] demand. This can be done with the creation and redemption mechanism that keeps share prices aligned with its underlying net asset value (NAV).

“Traditionally, authorized participants are large banks like Bank of America (BAC), JPMorgan Chase (JPM), Goldman Sachs (GS), and Morgan Stanley (MS), among others. They do not receive compensation from a sponsor and have no legal obligation to redeem or create the ETF’s shares. Instead, authorized participants are compensated through activity in the secondary market or service fees collected from clients yearning to execute primary trades.”

That phrase in the above paragraph, highlighting that authorized participants “have no legal obligation to redeem or create the ETF’s shares” is part of the train wreck that is happening right now on Wall Street.

Ayan Bhattacharya and Maureen O’Hara wrote an outstanding paper for the CFA [Chartered Financial Analyst] Institute Research Foundation in January on the dangers of ETFs. They write as follows:

“The use of ETFs as cash substitutes by money market funds and other investment products raises the prospect of problems in ETFs spreading to other markets.

“ETFs based on illiquid, nontransparent markets can face rebalancing risks, which can lead to systemic effects on both the ETF and the underlying [securities].”

“One reason this ‘step away’ risk can take on systemic importance is that it affects money managers holding ETFs in other types of funds. The rise of fixed-income ETFs has led many asset managers to use ETFs for cash management purposes. This practice of using ETFs as cash equivalents is only appropriate, however, if the ETFs can always be turned into cash immediately (and relatively without cost). Disruptions in the bond market, leading to disruptions in the creation and redemption process for fixed income ETFs, would undermine this ability. The European Systemic Risk Board has argued that such disruption could destabilize institutions that depend on ETFs for cash management. The Central Bank of Ireland, as part of a broader program to manage potential concentration risk, has proposed identifying which institutions act as authorized participants and how they are compensated for doing so.”

If, as the authors suggest, money market funds are holding bond ETFs as cash substitutes and they have now become illiquid, this may explain why the Fed had to also establish a Money Market Mutual Fund Liquidity Facility which has, as of last Wednesday, bailed out $29.86 billion of assets that no one else wanted.

As for the possibility that the biggest banks on Wall Street that hold the vast majority of deposits in the country might “step away” from doing their job of lending, we already have proof of that. We know that the Fed’s emergency repo loan program, which has funneled more than $9 trillion cumulatively in below market rate loans to Wall Street, began on September 17, 2019, months before there was a COVID-19 case anywhere in the world. We know it resulted from the biggest bank in the country stepping away from making repo loans because JPMorgan Chase’s CEO, Jamie Dimon, admitted that in an earnings call. (Other Wall Street banks likely stepped away as well.)

Congress needs to stop fiddling while Rome burns and start holding hearings to get at the truth of what’s happening on Wall Street.