Fed Chair Powell Has Upwards of $11.6 Million Invested with BlackRock, the Firm that Will Manage a $750 Billion Corporate Bond Bailout Program for the Fed 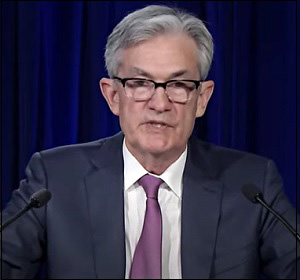 Most Americans likely assume that Jerome Powell, the Chairman of the Federal Reserve, is an economist, like the prior chairs of the Fed over the past 40 years. He’s not. Powell is a former investment banker at the Wall Street firm, Dillon Read; a former partner at the controversial private equity and leveraged buyout firm, the Carlyle Group, which has spent over $1 billion over the past decade lobbying the federal government; and a former lawyer at Davis Polk, a Big Law firm that played a key role advising the government and Treasury in the 2008 Wall Street bailout.

Powell’s background would be strange enough but now consider this. The Vice Chairman for Supervision at the Fed, Randal Quarles, who is in charge of supervising the largest and most dangerous Wall Street bank holding companies in the U.S., has an uncannily similar background to Powell. Quarles also worked previously at Davis Polk and the Carlyle Group. (Powell and Quarles are also good friends, according to Senator Elizabeth Warren.)

Both men were well schooled in leveraged buyouts before coming to the Fed. Both men are now involved in what is effectively levering up $454 billion of taxpayers’ money provided to the Fed under the recently passed CARES Act into a $4.5 trillion leveraged buyout fund of toxic debt from Wall Street banks. After taxpayers’ take the first $454 billion in losses on those purchases, the remainder may be sold off to private investors. If this sounds to you like a set-up on behalf of the one percent, it should.

Powell is a member of that one percent class. According to his 2019 financial disclosure, his net worth could run as high as $55 million. Much of his investments are with Goldman Sachs (a Wall Street bank that is supervised by the Fed) or with BlackRock and its iShares Exchange Traded Funds (ETFs). The government mandated financial disclosures report investment values in a range. The upper value of Powell’s holdings with BlackRock is $11.6 million. The upper range of Powell’s holdings with Goldman Sachs is $16.55 million. The name Goldman Sachs has been shortened to “GS” in the disclosure document.

These would appear to be large conflicts of interest. BlackRock has been selected to manage the unprecedented buying of both investment grade and junk bonds on behalf of the Fed to the tune of approximately $750 billion according to the most recent term sheet from the Fed. Even more conflicted, the Fed will allow BlackRock to buy up its own sinking junk bond ETFs using taxpayer and Fed money. (See here and here.)

Here’s another thing you likely don’t know about Fed Chairman Jerome Powell. Some of the smartest, most respected Senate Democrats did not vote in favor of confirming Powell for the job of Fed Chairman. Those included Senator Richard Blumenthal of Connecticut; Senator Cory Booker of New Jersey; Senator Kirsten Gillibrand of New York; Senator Kamala Harris of California; Senator Ed Markey of Massachusetts; Senator Jeff Merkley of Oregon; Senator Bernie Sanders of Vermont; and Senator Elizabeth Warren of Massachusetts.

From the Senate floor on January 23, 2018, Senator Elizabeth Warren said this about why she would not vote in favor of Powell for Fed Chairman: 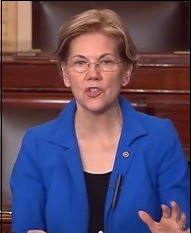 Senator Elizabeth Warren Speaks from the Senate Floor Against the Confirmation of Jerome Powell as Fed Chairman on January 23, 2018

“I am deeply concerned that as soon as Governor Powell unpacks his boxes in the Chairman’s office, he will begin weakening the new rules Congress and the Fed put in place after the 2008 financial crisis. And he will have help: right down the hall will be his ‘close friend,’ Randal Quarles, the Fed’s new Vice Chair for Supervision. Governor Powell told me when we met that he intended to rely a lot on Vice Chair Quarles on regulatory issues.

“That is a really dangerous prospect. Before coming to the Fed, Vice Chair Quarles spent more than a decade in private equity, where he made his mark arguing for weaker rules on big banks. And he’s gotten a running start now that he’s at the Fed. In a speech a few weeks ago at his old private equity firm, Quarles announced that he was working on reducing capital standards for Wall Street banks, weakening the Volcker rule, and making stress tests easier for big banks to pass — in other words, he’s already set up his to-do list to gut measures put in place after the financial crisis that are there to try to keep our economy safer.

“So Governor Powell says he will take his cues from a guy who wants to get rid of as many rules as he can and take the teeth out of the rules that he can’t. No thank you. That will make American families less safe. It will make the American economy less safe.

“And to make matters worse, Powell’s gifts to the giant banks will come at a time when banks of all sizes made gigantic profits last year and got giant tax giveaways in the bill that was passed in December. Good grief — when will enough be enough for these guys? But even with banks rolling in money, the army of lobbyists and executives have come back, storming Capitol Hill and the halls of the Fed, spinning this story that financial rules are throttling them and need to be cut back.”

Under Powell and Quarles, the rules on everything from the amount of reserves held at the Fed by the mega banks to the Volcker Rule have been gutted until they are essentially meaningless.

That should have been a given considering that the Washington Post reported that Powell, in the nine months prior to his confirmation hearing, had “formal meetings or calls 50 times this year with the heads of Wall Street investment banks such as Goldman Sachs, JP Morgan, Wells Fargo and Deutsche Bank, according to a copy of his calendar through Sept. 30.”

On the subject of Powell’s stated desire to roll back regulations on the Wall Street banks that were contained in the Dodd-Frank financial reform legislation of 2010, to prevent another Wall Street financial collapse such as occurred in 2008, the following exchange occurred between Powel and Senator Elizabeth Warren during his Senate confirmation hearing on November 28, 2017:

Warren: “So before the 2008 crisis the Fed had a lot of authority to regulate and supervise the biggest banks in the country. But they failed to use that authority. When times were good, it looked like maybe we didn’t need strong rules. And then when the Fed’s failure to put strong rules in place ended up costing millions of people their jobs, millions of people their homes and millions of people their savings. Under Chairman Yellen’s leadership for the past four years, the Chair has adopted a number of rules to reduce the risk of another financial crisis. And you have supported those rules and helped implement them. I understand that now if you are confirmed you intend to take another look at those rules.

“In your written testimony you say that you will, and I’ll quote you, ‘continue to consider appropriate ways to ease regulatory burdens.’ So let me ask this. You specifically say that you’ll look for ways to roll the rules back. Are there any rules you believe should be made stronger?”

Powell: “Well, I do, yes. If you think of the four principle pillars of reform, I think they can all be made stronger and all be made more transparent, clearer and efficient. I’ve also said there are a number of things I wouldn’t roll back.”

Warren: “So what are the rules you said you would make stronger?”

Powell: “Well, I think with resolution. We will expect firms to make progress on resolvability, on stress testing…”

Warren: “So you would want to see rules that are more aggressive on the living wills, for example.”

Powell: “Yes, and I’m not so much thinking of more aggressive rules as our expectation…”

Powell: “So I get your question. I would say there are a lot of problems that we need to address in the banking system. I do think that we’ve had eight years now of writing new rules and, honestly, I can’t really think of a place where we are lacking an important rule. It’s really a question now of dealing with things from a supervisory standpoint.”

Warren: “So of all the rules the Fed has issued during your time, you’ve been there for five years – on capital, on leverage, on liquidity, on stress tests – you don’t think a single one should be made tougher?”

Warren: “Well, okay. I got to say this worries me. But let me take a look for just a minute here at the rules you say you want to roll back. A few years ago the Fed and other agencies finalized the Volcker Rule with your support on that. It prohibits banks from trading on their own account unless it directly relates to customer service. And this addresses one of the main ways that banks got into trouble on the build up of the financial crisis that sent them to Congress for a $700 billion bailout. Do you support significant changes in the Volcker Rule that apply to big banks, for example, by exempting additional forms of trading?”

Warren: “So you would favor exempting more trading, for example.”

Powell: “I would favor tailoring the application of the…”

Warren: “Okay, I would call that weakening the rule…But I am deeply concerned that you believe that the biggest regulatory problem in the country right now is that the rules are too hard on Wall Street banks. That kind of mindset led the Fed to ignore the financial system risks before 2008. It helped lead to the financial crisis and it helped lead to the recession that followed it. So, I’m worried that we not go down this path again. Because if we do, it’s going to be the same thing. And that is that millions of families are going to pay the price while the banks end up once again getting bailed out and with record profits.”

That day predicted by Warren has now arrived. And it arrived four months before there was any case of COVID-19 reported anywhere in the world. See our timeline of the Wall Street financial crisis here and our report that the Fed had pumped $6.6 trillion cumulatively in emergency loans to Wall Street before the first death from COVID-19 had occurred in the U.S.

At Powell’s press conference on April 29 he was asked by a reporter about his earlier stance that the U.S. government needed to get its fiscal house in order and get the growing national debt under control. Powell answered that “This is not the time to act on those concerns.”

When we have a U.S. Treasury Secretary that’s a former Goldman Sachs banker (and foreclosure king during the last financial crisis) handing over $454 billion of taxpayers’ money to be used as “loss absorbing capital” to fund a $4.54 trillion leveraged bailout fund for Wall Street, we think that now is exactly the time to hold web-based Senate Banking hearings, open to the public, to get to the bottom of just what’s going on here.