The Fed’s Chair and Vice Chair Got Rich at Carlyle Group, a Private Equity Fund with a String of Bankruptcies and Job Losses 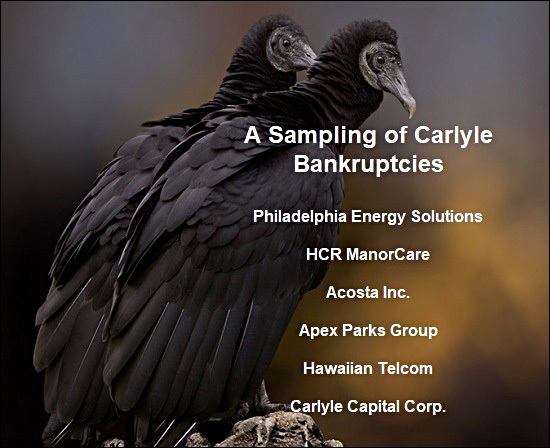 Private equity funds have been variously called “merchants of debt,” “vultures,” or “corporate raiders.” What a private equity fund typically does is to buy up companies by piling debt on the balance sheet, selling off valuable assets like real estate, extracting giant dividends for the private equity partners to the detriment of workers and customers, and then, frequently, letting the company collapse into bankruptcy while laying off thousands of workers or liquidating the whole company.

It should give pause to every American that the two top men at the Federal Reserve who are implementing a new $4.54 trillion bailout fund for Wall Street, using $454 billion from taxpayers to absorb the losses, both got rich working for one of the world’s largest such private equity firms: the Carlyle Group.

According to his official bio, Fed Chairman Jerome Powell was a partner at the Carlyle Group from 1997 to 2005. In November 2017, Stephen Gandel, writing for Bloomberg News, calculated that Powell’s wealth could be as much as $112 million.

The man responsible for supervising the largest and crime-riddled banks on Wall Street, Fed Vice Chairman for Supervision Randal Quarles, is even richer than Powell. According to Quarles’ financial disclosure form dated June 1, 2017, he could be worth as much as $125 million. In 2017, between $10 million to $50 million of Quarles’ investments were in Carlyle Group. On just those Carlyle investments, Quarles was receiving a range of between $2 million and $10 million in annual income. (The government allows federal employees to report a preposterously broad range on asset values and income on financial disclosure forms.) Quarles was a Managing Director at Carlyle Global Financial Services Partners from 2007 to 2013. The Carlyle investments have been replaced by different investments on Quarles’ most recent financial disclosure form.

Carlyle Group’s current and former partners are not defensive about the string of bankruptcies and jobless workers it has left in its quest to extract riches from its buyout targets. Carlyle had several bankruptcies during the last financial crisis with more blowups in the past two years.

In November 2018, Peter Whoriskey and Dan Keating of the Washington Post penned a devastating critique on how Carlyle had handled its investment in a chain of nursing homes known as HCR ManorCare, which filed for bankruptcy in March of 2018. The authors wrote that there was a 29 percent rise in serious health code violations at HCR ManorCare in the years before the bankruptcy and following a 2011 financial deal that “extracted $1.3 billion from the company” for Carlyle investors while saddling the nursing home chain with debt. Under the same deal, most of the company’s real estate was sold off, forcing it to now pay rent to the new owners. Hundreds of layoffs of employees occurred soon after, leaving the vulnerable residents neglected according to the article.

The Washington Post reporters explained the consequences of leveraged-buyout artists running homes for the most vulnerable in society:

“The lack of care had devastating consequences. One man had been dosed with so many opioids that he had to be rushed to a hospital, according to the inspection reports. During an undersupervised bus trip to church — one staff member was escorting six patients who could not walk without help — a resident flipped backward on a wheelchair ramp and suffered a brain hemorrhage.

“When a nurse’s aide who should have had a helper was trying to lift a paraplegic woman, the woman fell and fractured her hip, her head landing on the floor beneath her roommate’s bed.”

In January 2018, another asset-stripped company that was owned by Carlyle Group, Philadelphia Energy Solutions (PES), filed bankruptcy. Reuters explained what happened this way: “The Carlyle-led consortium collected at least $594 million in cash distributions from PES before it collapsed, according to a Reuters review of bankruptcy filings. Carlyle paid $175 million in 2012 for its two-thirds stake in the refiner. More than half the distributions to the Carlyle-led investors were financed by loans against PES assets that the refiner now can’t pay back, the filings show.”

Last year, Philadelphia Energy Solutions filed its second bankruptcy in two years. It followed a major fire at the plant. According to Reuters, 1,000 employees lost their jobs. In February of this year, the bankruptcy judge approved the sale of the charred 1300-acre site to a company that plans to turn it into a mixed-use industrial park.

Hawaiian Telcom was launched in 2005 from assets Carlyle acquired from Verizon. Carlyle had no experience running a telephone company. Carlyle loaded it up with debt and the company filed bankruptcy less than four years later in 2008.

More bankruptcies and job losses are piling up as a result of the business model at Carlyle. In December of last year, Carlyle filed a prepackaged bankruptcy plan for Acosta Inc., a sales and marketing firm that it had bought for $4.75 billion in 2014. The bankruptcy deal called for Acosta’s major creditors to accept equity in exchange for extinguishing approximately $3 billion in debt. In April of this year, Apex Parks Group, with a substantial ownership interest held by Carlyle Group, filed bankruptcy. The company operates amusement parks and water parks across the U.S.

Many Americans will recall that the iconic Wall Street investment bank, Bear Stearns, collapsed on March 16, 2008 under the weight of toxic bets gone awry. But few Americans are likely to remember that three days before the demise of Bear Stearns, an insanely leveraged creation of Carlyle Group, Carlyle Capital Corp., also collapsed and was liquidated.

In 2007, in the midst of what would become the worst financial collapse since the Great Depression, Carlyle Capital Corp. filed a stock offering in Amsterdam. Notably, among the bookrunners on the deal were Citigroup, JPMorgan, Deutsche Bank, Lehman Brothers and Bear Stearns – the same banks that were loaning Carlyle Capital money through repo loans to make its wild leveraged bets. (Lehman and Bear would blow themselves up and disappear as a result of the same toxic investments as Carlyle Capital. Citigroup also blew itself up with those investments but was secretly propped up by the Fed with $2.5 trillion in cheap revolving loans over more than two years according to a subsequent audit performed by the Government Accountability Office.)

The Offering Memorandum for the deal said Carlyle Capital would be investing in the following: RMBS (residential mortgage-backed securities]; junk bonds (high yield bonds); bank loans; mezzanine debt; distressed debt; debtor-in-possession and non-performing loans; derivatives of these asset classes, including credit derivatives. In addition to selecting the worst possible investments at the worst possible moment in history, the Offering Memorandum explained how the investments would be leveraged, writing as follows:

“Once the net proceeds from the global offering are fully deployed in the various asset classes in which we intend to invest, we expect our leverage ratio to be approximately 29 times….”

The stock went public in Amsterdam for $20. By the spring of the following year it was trading at 35 cents. Carlyle Capital defaulted on $16 billion in debt at the time of its collapse in March of 2008.

Carlyle Capital is not all that dissimilar to the $4.54 trillion bailout fund that Powell and Quarles are now rolling out for Wall Street. It is highly leveraged (by a factor of 10 to 1); it is buying up toxic waste from Wall Street; it has secured dumb money to eat the losses. The U.S. Treasury Department somehow convinced Congress to commit $454 billion of taxpayers’ money from the recent stimulus bill known as the CARES Act to absorb losses in this Wall Street bailout fund.

On Wall Street, when you are attempting to “put lipstick on a pig” and sell it to the public, you go on what is called a “Road Show” to promote the deal. On March 26, Fed Chairman Powell gave an unprecedented interview with the Today show. He explained the highly-leveraged Wall Street bailout fund as follows:

There is absolutely no rule that says the Fed can’t lose money. The Federal Reserve Act, the statute that governs the Fed, simply says that it must accept “good collateral” that is appropriate to guarantee the loans it makes. The Fed did not demand any taxpayer money when it secretly shelled out $29 trillion in revolving loans against collateral as crazy as collapsing junk bonds and stocks during the 2007 to 2010 financial crisis.

It is unprecedented for the Federal Reserve to buy three-quarters of a trillion dollars of corporate bonds. It is both unprecedented and insane for the Fed to buy junk bonds and allow BlackRock, which will personally benefit, to manage the programs. (See here and here.)

When something this unprecedented is happening and it is happening under the aegis of two men who hail from the Carlyle Group, it’s long past the time for Congressional hearings.