We’ve been watching Senate Banking Committee hearings for decades. There is typically some level of professional politeness by Senators toward witnesses that are testifying. That didn’t happen yesterday. Both Republicans and Democrats lashed out at Treasury Secretary Steve Mnuchin for effectively cooking up a deal that put him in charge of $500 billion of taxpayers’ money under the stimulus bill known as the CARES Act and has now left Congress in the dark about how that money is being spent. During the hearing, which was held virtually, Senator Elizabeth Warren of Massachusetts summed up the situation to Mnuchin like this: “You are boosting your Wall Street buddies and leaving Americans behind.”

The hearing was called to hear from both Mnuchin and Fed Chair Jerome Powell.  The CARES Act, irresponsibly, gave Mnuchin control of $500 billion, of which $454 billion was earmarked to go to the Fed to be leveraged into a $4.54 trillion bailout program. Apparently, Democrats were promised the money would go to help Main Street while the actual crafters of the legislation conveniently forgot to put that language in the bill. The bulk of the numerous programs set up by the Fed, which will use CARES Act money to absorb losses, are structured as bailout programs for Wall Street or the fossil fuels industry. 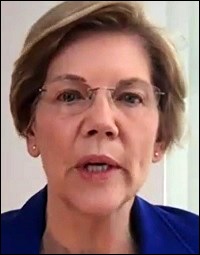 During the hearing yesterday, Democratic Senator Elizabeth Warren derided the $500 billion as a “slush fund” while Republican Senator John Kennedy of Louisiana described it as a backroom deal put together by Mnuchin, Mitch McConnell, Nancy Pelosi, Kevin McCarthy, and Chuck Schumer and then forced on other members of Congress who didn’t get to participate in the negotiations. Kennedy said Congressional members “moan and groan and complain and then moo and follow their leaders in the shoot like cattle.” Kennedy promised Mnuchin that the next deal he attempts to bring to Congress on this basis is going to receive “serious pushback from Republicans and Democrats in both houses.” 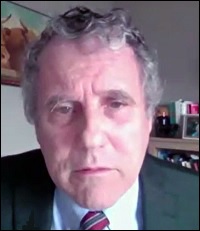 Senator Sherrod Brown of Ohio asked Mnuchin: “So, how many workers should give their lives to increase our GDP by a half a percent…or the Dow Jones by a thousand points?”

Senator Jack Reed of Rhode Island said that he had watched in 2008, 2009 and 2010 as Congress and the Fed helped the mortgage market get back on its feet but did next to nothing to help individual citizens avoid millions of foreclosures. He said this is like déjà vu all over again.

Senator Bob Menendez of New Jersey told Mnuchin that the budget shortfalls at local and state governments are going to lead to a “devil’s cocktail” of “devastating layoffs, dangerous cuts to public safety and public services and massive local tax increases.” Mendendez said that the Bureau of Labor Statistics “just reported that state and local governments laid off nearly 1 million workers in the month of April.” Menendez said this included fire fighters and emergency workers. Menendez and other Senators sent a letter to Powell asking him to expand the Fed’s emergency programs to include buying longer-term municipal bonds in order to bring down the costs of borrowing for state and local governments. Powell said he would take a look at the proposal.

Mnuchin told Senator Jon Tester of Montana that he has complied fully with releasing information on who is getting the money from the CARES Act and said it has been posted online at the Treasury’s website. Tester told him that “I’m not seeing any of it.” (Wall Street On Parade also could find no list of recipients of the $500 billion on the Treasury’s website.)

Tester asked Powell how much money from its leveraged facilities has already been spent to help the U.S. economy. Powell said the largest facilities “are just coming on line,” so “it’s all ahead of us.” Powell added that the amount of money thus far is “fairly modest.” Powell told Tester that the Fed “has committed to disclose all of the borrowers and the amounts in a timely way.”

Wall Street On Parade, using the Fed’s own weekly balance sheet report, tallied up that the Fed  Hasn’t Spent a Dime Yet for Main Street Versus $735 Billion for Wall Street. Thus far, the Fed has not released the name of any recipient of funds that went to Wall Street banks or trading houses.

Senator Warren opened her scathing critique of what has gone down by noting that this hearing was taking place in the “worst economic crisis of our lifetime.” She said “Congress passed the CARES Act and put nearly half a trillion dollars in corporate bailout money in your hands.” Warren explained that the legislation gave the Treasury Secretary the authority to place requirements on the corporations getting this money. She asked Mnuchin if, as part of these requirements, he was going to require the corporations that are getting the bailout funds to keep their workers on their payroll. Mnuchin dodged the question and said the terms of the $500 billion in the CARES Act had been negotiated by both parties.

Pressed further by Warren, Mnuchin said that in the Main Street Lending Facility it requires companies to use their “best efforts” to keep workers employed. The Main Street Lending Facility is a preposterous title for this program. The facility provides loans to companies with as many as 15,000 workers and up to $5 billion in annual revenues – hardly a “Main Street” business. It also currently requires businesses to have a credit rating from one of the major credit rating agencies like Moody’s or S&P – also unheard of by mom and pop businesses on “Main Street.”

Anyone who had sat through Mnuchin’s Senate confirmation hearing for Treasury Secretary would have known that trusting the former foreclosure king with a half trillion dollar slush fund would turn into a cruel joke for struggling Americans during the worst economic crisis since the Great Depression. During Mnuchin’s confirmation hearing, Senator Ron Wyden made the not-so-subtle suggestion that Mnuchin had falsified his financial disclosures. Wyden said this:

Senator Wyden also disclosed that while Mnuchin had been CEO of a bank called OneWest (formerly IndyMac) during the last financial crisis, “the bank proved it could put more vulnerable people on the street faster than just about anybody else around.” Between 2009 and 2014, according to Wyden, the bank foreclosed on 35,000 homes and was found guilty of engaging in an illegal practice known as “dual-tracking,” where one bank department tells struggling homeowners to stop making payments so they can pursue a loan modification, while another department at the bank initiates a surprise foreclosure proceeding.

Senator Bernie Sanders made this statement prior to a full Senate vote on Mnuchin for Treasury Secretary:

“During the campaign, President-elect Donald Trump told the American people that he was going to change Washington by taking on Wall Street. But now that the election is over, Donald Trump’s choice for Treasury Secretary is the same old, same old Wall Street insider who made a fortune during the financial crisis as millions lost their homes. If confirmed, Steve Mnuchin would be the third Treasury Secretary to come from Goldman Sachs in the last 17 years. That is not the type of change that Donald Trump promised to bring to Washington — that is hypocrisy at its worst.”

Mnuchin was confirmed by a slim margin of votes in the Senate, 53-47, along party lines, with all Republicans voting for him and all Democrats voting against him, except for Democratic Senator Joe Manchin of West Virginia, who voted yes.

Mnuchin is married to the actress, Louise Linton, who has shown outright disdain for the little people. One of her infamous business trips with Mnuchin went viral in August of 2017 when Linton bragged in an Instagram post about her designer clothes as she disembarked with Mnuchin from a U.S. chartered plane. Linton flaunted her #hermes, #valentino, #roulandmouret, and #tomfordsunnies couture. When a female reader responded in a post, “glad we could pay for your little getaway,” Linton berated her for being “adorably out of touch,” and bragging about how much more in taxes Linton and Mnuchin pay than the little people.

Good luck with that $500 billion of taxpayers’ money.