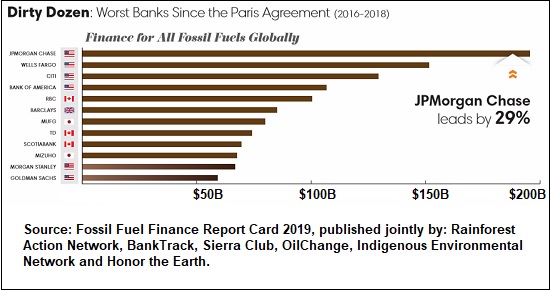 U.S. Treasury Secretary Steve Mnuchin and Federal Reserve Chairman Jerome Powell have apparently never walked down a Main Street in America. We make that statement because there is a huge disconnect between what’s really located on a typical Main Street and what’s in the bailout program they’ve designed and are calling the Main Street Lending Program (MSLP).

Americans need to sit up and pay attention to what’s going on here because the U.S. Treasury has committed $75 billion of taxpayers’ money to support this program under the illusion that it’s going to mom and pop operations on a typical Main Street in America. That initial $75 billion will be levered up to $750 billion under the Fed’s ability to create money out of thin air, with taxpayers eating the first $75 billion of losses. Once the loans are originated by a lender, they will then be bought up by a Fed-created Special Purpose Vehicle, thus removing bad loans from the balance sheets of banks like JPMorgan Chase, Wells Fargo, Citigroup and the like.  The banks will only have to retain 5 percent of the exposure.

We’ve walked down plenty of Main Streets in America: in West Virginia, downstate and upstate New York, New Hampshire, Connecticut, Florida and in ski towns from coast to coast. We’ve seen plenty of boutique gift shops, family-owned restaurants and ice cream parlors, hair and nail salons, sole-proprietor bake shops, and locally-owned breweries. What we’ve never seen on any of these streets is a shop or restaurant with “15,000 employees or up to $5 billion in annual revenue” or one that needed to refinance $200 million in debt. And yet, that describes businesses that will be able to apply for loans under the Fed’s “Main Street” Expanded Lending Program that has been approved by both Treasury Secretary Mnuchin and Fed Chair Powell.

You have to ask yourself this: if this was really about helping Main Street, why wouldn’t that $750 billion have simply been added to the Paycheck Protection Program (PPP) which is restricted to businesses with 500 or fewer employees – the Small Business Administration’s definition of a small business? The second round of funding to that program by Congress is likely to run out sometime this week. Just under half of all American workers are employed by a small business that has less than 500 workers according to the most recent government data.

The Fed changed the terms of its “Main Street” Lending Program on April 30 in ways that make clear that it’s not at all about rescuing small businesses on Main Street that have been shuttered as a result of mandated government action during the COVID-19 outbreak but is actually all about bailing out the failing debt of the fossil fuel industry and the big banks on Wall Street that hold that debt. Here, for example, is how the Fed describes one facet of the “Main Street” program called the Main Street Expanded Loan Facility (MSELF):

The Fed also explains that the above covenants would not prohibit a borrower “from refinancing maturing debt.” That means that a fossil fuel company could pay off their maturing debt held by JPMorgan Chase or another mega bank on Wall Street (see chart above) which is at a much higher interest rate and refinance it at a little over 3 percent interest under this program. Then the bank can sell that debt to the Special Purpose Vehicle set up by the Fed, keeping just a sliver of exposure on its balance sheet. It’s a win-win for the fossil fuels industry and Wall Street banks and a big loss to anyone who cares about their lungs, those of their children, or the survival of the planet.

Anticipating that the Fed would succumb to lobbying from the fossil fuels industry, on April 15 Senator Ed Markey of Massachusetts and Congresswoman Nanette Diaz Barragán of California, together with 39 other House and Senate members, sent a letter to Mnuchin and Powell asking them to “ignore the pleas of big oil lobbyists” and “instead focus on supporting the workers and small businesses who truly need assistance due to the coronavirus public health emergency.”

The letter also made the following critical points about the fossil fuel industry and the current health crisis:

“In just the last two weeks, the Trump administration has used a combination of enforcement waivers, bargain basement oil and gas lease sales, and a rollback of fuel economy standards to transfer billions of dollars in value of natural resource and clean air benefits from the public to the fossil fuel industry. These actions are especially abhorrent during a pandemic whose burden falls heaviest on Americans with weakened respiratory systems…”

The nonprofit watchdog, Public Citizen, released the following statement by David Arkush, Managing Director of its Climate Program on April 30 when the Fed announced the cozy changes to its “Main Street” lending facility:

“The Fed should not be in the business of bailing out companies that were in terminal decline and suffering largely from their own misadventures well before the coronavirus pandemic. The fracking industry is notoriously overleveraged, and fracking gas is not even profitable.

“Rescuing fossil fuel production is absolutely the wrong direction for public health amid a global pandemic. Fossil fuel combustion produces air pollution that kills hundreds of thousands of Americans and millions more globally each year. The same pollution also substantially increases COVID-19 mortality. This is all without considering the cascade of public health and economic crises we face due to fossil-fuel-induced climate chaos.

“The U.S. should be working to phase out fossil fuels as swiftly as possible, not rescuing a toxic and reckless industry that is already in a terminal, albeit too slow, decline. The transition away from fossil fuels will require massive investments that will create millions of jobs. U.S. recovery spending that doesn’t directly target public health and blameless companies and workers should be aimed squarely at accelerating this transition, not stalling it.

“The real concern in the oil and gas industry is that workers are losing jobs, as they are in so many other sectors. The response here should be to rescue the workers and provide relief to state and local governments straining to meet the many challenges of this pandemic at the same time as their revenues decline sharply. It should not be to rescue reckless, polluting, humanity-endangering and often dishonest companies that were in plenty of trouble of their own making well before this pandemic began.”

That last sentence could just as easily apply to the Wall Street mega banks that are also being bailed out of their reckless loans and were also “in plenty of trouble of their own making well before this pandemic began.”