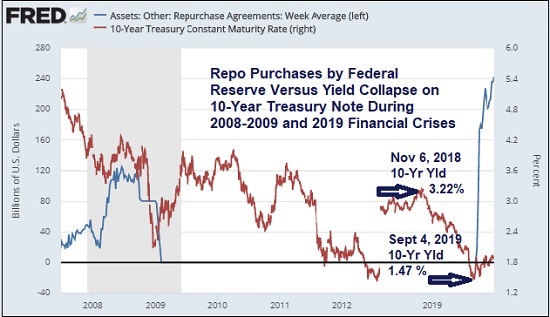 But as the timeline below and the chart above clearly substantiate, the financial crisis on Wall Street began in earnest on September 17, 2019, almost four months before the first death from coronavirus anywhere in the world was reported in China on January 11, 2020 and five months before the first death in the U.S. was reported on February 29, 2020, having occurred one day earlier on February 28. (See the New York Times coronavirus timetable here.)

This big disconnect between what people believe about the current Wall Street crisis and the easily documented facts show just how effective Wall Street’s spin doctors and protection racket have become at promulgating a false narrative through mainstream media outlets. (To help get the truth out to the American people, Wall Street On Parade has chronicled each milestone in the crisis in an investigative series that now includes more than seven dozen articles.)

The reason that it’s critically important for Americans to understand that Wall Street is getting another massive bailout from the Fed for a crisis it started before COVID-19 was on our shores is because the structure of Wall Street, with trading casinos allowed to own our largest commercial banks, is far more deadly to the future of America than COVID-19.

In addition to the timeline listed below, pay close attention to the chart above. We show how the Fed jumped into the repo loan market (blue line) during the 2007 to 2010 Wall Street financial crisis versus the collapse in the 10-year Treasury Note. During that period, the Fed’s emergency repo loans reached a peak of $126 billion just before the bankruptcy filing of Lehman Brothers on September 15, 2008. Last year, the Fed intervened in the repo loan market on September 17 for the first time since the financial crash of 2007 to 2010 (and five months before the first reported death in the U.S. from COVID-19). The Fed’s emergency repo loans outstanding last year hit a peak of $236.6 billion on December 18, 2019 — $100 billion more than during the worst financial crisis since the Great Depression.

Comparing the collapse in the yield of the 10-year Treasury Note is also revealing. During the epic financial collapse of 2007-2010, the yield on the T-Note was collapsing, suggesting an economic catastrophe was brewing. Last year, the yield on the 10-year T-Note collapsed from 3.22 percent to 1.47 percent in advance of the Fed jumping in with emergency repo loans on September 17. Again, that was four months before a COVID-19 death had been reported anywhere in the world.

As the timeline below indicates, the financial crisis in the fall of last year was so dangerous that the Fed had pumped a cumulative $6.6 trillion in repo loans to the trading houses on Wall Street a month prior to the first reported death from COVID-19 in the United States.

Timeline of the 2019 Financial Crisis on Wall Street

September 17, 2019: New York Fed announces it is intervening in the repo loan market for the first time since the Wall Street crash of 2007 to 2010. The Fed will provide a maximum of $75 billion per day to 24 Wall Street trading houses (primary dealers) with a cap of $40 billion going to any one firm. (This large cap suggests the New York Fed knows that one or more specific firms are in trouble.) There have been no news reports of coronavirus COVID-19 anywhere in the world at this point.

September 20, 2019: Three days after launching its daily $75 billion of overnight repo loans, the New York Fed announces that these will continue but it is also adding $30 billion in 14-day terms loans that will be offered three times during the week of September 23. This is a clear indication that banks have backed away from lending to one another just as occurred in the 2007 to 2010 financial crisis.

October 1, 2019:  Reuters’ David Henry reported the following: “Publicly-filed data shows JPMorgan reduced the cash it has on deposit at the Federal Reserve, from which it might have lent, by $158 billion in the year through June, a 57% decline.”

October 4, 2019: The New York Fed announces that the $75 billion in daily overnight repo loans will continue and the 14-day term repo loans will be increased to between $35 and $45 billion twice per week through the end of October. An extra $45 billion 6-day term loan will be thrown in for good measure on October 11. Clearly there is an ongoing crisis on Wall Street.

October 11, 2019: The New York Fed announces that on top of its overnight and term repo operations, which will continue through at least January of 2020, it will begin buying up $60 billion of U.S. Treasury bills monthly (to add further liquidity to dampen the Wall Street crisis).

October 23, 2019: The New York Fed announces that, effective October 24, it will increase its daily overnight repo loans from $75 billion to $120 billion while 14-day term repos will also continue. Clearly, there is a cash crunch on Wall Street that is getting worse, not better.

November 12, 2019: Wall Street On Parade files a Freedom of Information Act (FOIA) request with the Federal Reserve seeking emails and correspondence related to why JPMorgan Chase needed to reduce its cash reserves at the Fed by $158 billion. Wall Street On Parade does not receive a response to its FOIA request until March 11, 2020. The response, under the law, should have come within 20 business days. Instead, it came four months later with no explanation for the delay. The Fed conceded that it had 223 pages of relevant documents but it was not going to be sharing them with Wall Street On Parade.

January 27, 2020: Wall Street On Parade, using the New York Fed’s own Excel spreadsheet data on its repo loans, publishes the finding that the New York Fed has pumped out a cumulative $6.6 trillion in super cheap loans to the trading houses of Wall Street with no explanation as to whether Wall Street banks are experiencing a funding, liquidity or insolvency crisis.