Wall Street Had Cut 68,000 Jobs and Received Trillions in Emergency Loans Prior to COVID-19 Anywhere in the World 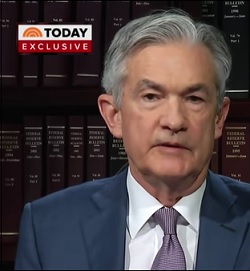 On March 26 Federal Reserve Chairman Jerome Powell went on the Today show to deliver one message: “There is nothing fundamentally wrong with our economy.” Recently U.S. Treasury Secretary Steve Mnuchin has appeared on the White House lawn to tell reporters that this is nothing like the last financial crisis. Fed regional bank presidents have appeared on cable news asserting that the Wall Street banks have plenty of capital and today’s economic distress is caused solely by the coronavirus. Even New York Times columnist and perpetual Wall Street cheerleader, Paul Krugman, was on CNBC this week reassuring viewers that today’s problem was not like the last financial crisis.

And yet – the facts keep getting in the way of this “official” narrative.

The first coronavirus COVID-19 case was discovered in China in December 2019 and didn’t become a major issue in the United States until February 2020. But on October 7, 2019 we reported that Wall Street banks had announced a staggering 68,000 job cuts as the Fed pumped $310 billion more in unprecedented loans to Wall Street. That doesn’t sound like there was “nothing fundamentally wrong with our economy,” the narrative that Powell is pushing.

On October 9 we reported that Powell had appeared at a speaking event in Denver at the National Association of Business Economists and acknowledged that a larger, long-term bailout of Wall Street was on its way. That also doesn’t sound like everything was fine in the financial world before the coronavirus hit.

On January 27, 2020, again before any reported death from coronavirus in the U.S., we reported that Fed Repos Have Plowed $6.6 Trillion to Wall Street in Four Months; That’s 34% of Its Feeding Tube During Epic Financial Crash. Again, that doesn’t sound like there was nothing fundamentally wrong before the coronavirus hit.

Now the Office of the Comptroller of the Currency (OCC), the federal regulator of national banks, has finally released its quarterly “Report on Bank Trading and Derivatives Activities” for the last quarter of 2019. The new report shows just how highly-leveraged the biggest Wall Street banks are if you include their exposure to derivatives. The chart above is based on data from that report (see Table 4 in the Appendix).

Goldman Sachs Bank USA is the poster child for the insanity inherent in the U.S. banking system (with JPMorgan Chase and Citigroup’s Citibank not far behind). It has $228.8 billion in assets, $34.5 billion in risk-based capital, and $42.2 trillion in notional derivatives (face amount). Federal regulators are relying on Goldman Sachs Bank USA to have hedged $42.2 trillion in derivatives so that its netted out total credit exposure from all of its derivative contracts is just $118.4 billion rather than $42.2 trillion — which is still 344 percent of its risk-based capital.

That’s a big leap of faith given that JPMorgan Chase in 2012 had no idea its derivative traders in London were hiding massive losses on their derivative trades until a media leak brought on an investigation. JPMorgan CEO Jamie Dimon told the media at the time that it was all just “a tempest in a teapot.” But once the Senate’s Permanent Subcommittee on Investigations looked into the matter, it turned out to be a $6.2 billion loss on derivatives. The London traders had used the insured deposits of the bank as if they were chips in a gambling casino.

Even a calamity like that, which launched an FBI probe, did not move the Federal Reserve to tame these banking behemoths on Wall Street.

On June 27, 2017 Janet Yellen, then Chair of the U.S. Federal Reserve, spoke at an event at the British Academy in London. She opined as follows about the U.S. financial system:

“Would I say there will never, ever be another financial crisis? You know probably that would be going too far, but I do think we are much safer, and I hope that it will not be in our lifetimes and I don’t believe it will be.”

Yellen’s comment came nine years after the greatest Wall Street banking collapse since the Great Depression and the largest-in-history Federal Reserve bailout of Wall Street amounting to $29 trillion – which the Federal Reserve battled for more than two years in court to keep a secret from the American people.

Now, for only the second time in its 107-year history, the Fed has once again attached a multi-trillion-dollar feeding tube to Wall Street banks – a feeding tube it first put in place on September 17, 2019 – more than five months before the first death from coronavirus in the U.S.

At the close of the Today interview with Powell last week, the interviewer, Savannah Guthrie, said this might be the first time in the more than 60 years of the program that a Federal Reserve Chairman had appeared on the show to do a live interview. That will give you a sense of just how important it is for the Federal Reserve to set the narrative that the serially miscreant mega Wall Street banks that it has negligently supervised for the past decade, didn’t cause today’s financial crisis.