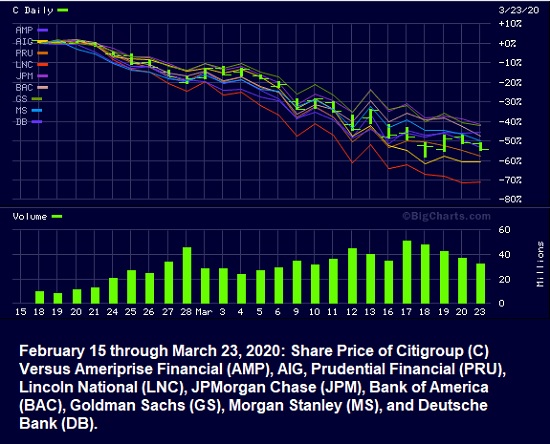 The chart that tells you how all of today’s economic troubles are going to end is not the bar graph of new deaths from coronavirus in Italy versus deaths in the U.S. It’s the chart that shows the number of potential deaths among the banks and insurance companies that have gorged themselves on risky derivatives and serve as counterparties to each other in a daisy chain of financial contagion.

The chart above is why the Federal Reserve is throwing unprecedented sums of money in all directions on Wall Street. Because despite being a primary regulator to these massive bank holding companies, the Fed has no idea who is actually in trouble on derivative trades, other than looking at a chart like the one above.

The chart above also justifies the Democrats refusing to sign off on the fiscal stimulus legislation that would have given U.S. Treasury Secretary Steve Mnuchin a $500 billion slush fund where the names of the recipients of bailouts could be withheld from the public.

In January 2007, prior to the last financial crisis, Citigroup’s stock was trading at the split-adjusted level of $550 a share. At yesterday’s stock market close, Citigroup’s stock price was $35.39. If you are a long-term shareholder in Citigroup, you’re still down 94 percent on your principal, not including dividends. After receiving the largest taxpayer and Federal Reserve bailout in banking history during the Wall Street financial crash of 2007 to 2010, Citigroup did a 1-for-10 reverse stock split to dress up its share price. In other words, if you owned 100 shares of Citigroup previously, you now owned just 10 shares at the adjusted price. If Citigroup had not done that, you would have seen a closing price yesterday of $3.54 cents instead of $35.39.

Citigroup is the poster child for everything that is wrong with the banking structure in the United States today. After blowing itself up with derivatives in 2008, in December 2014 it got the repeal of a key component of the Dodd-Frank financial reform legislation that would have forced derivatives out of federally-insured banks. Then in 2016, it went full speed into the very derivatives that were at the heart of the financial crisis in 2008, Credit Default Swaps. (See Bailed Out Citigroup Is Going Full Throttle into Derivatives that Blew Up AIG.)

Citigroup is not alone in loading up on derivatives again. Together with JPMorgan Chase, Morgan Stanley, Goldman Sachs and Bank of America, these five bank holding companies now control a notional (face amount) of derivatives amounting to $230 trillion, representing 85 percent of all derivatives held by U.S. banks.

And their counterparties are just as questionable as they were at the peak of the crisis in 2008, which led to the biggest Wall Street bailout in U.S. history.

The 2017 Financial Stability Report from the Office of Financial Research (whose budget and staff have now been gutted by the Trump administration) included this cautionary text:

“…some of the largest insurance companies have extensive financial connections to U.S. G-SIBs [Global Systemically Important Banks] through derivatives. For some insurers, evaluating these connections using public filings is difficult. Insurance holding companies report their total derivatives contracts in consolidated Generally Accepted Accounting Principles (GAAP) filings. Insurers are required to report more extensive details on the derivatives contracts of their insurance company subsidiaries in statutory filings, including data on individual counterparties and derivative contract type. But derivatives can also be held in other affiliates not subject to these statutory disclosures, resulting in substantially less information about some affiliates’ derivatives than required in insurers’ statutory filings.”

Insurance counterparties named in the report were Lincoln National Corp., Ameriprise Financial, Prudential Financial, Voya Financial and (wait for it), AIG, the insurance company that blew itself up with Wall Street derivatives in September 2008 and required a $185 billion bailout – with more than half of that sum going out its backdoor to pay off Wall Street and foreign global banks that had saddled it with derivatives that were structured bets that things would blow up. (Some of those funds were also used to settle securities lending programs with Wall Street banks and hedge funds.)

The report further indicates that a dangerous interconnectedness with a high potential for contagion has grown between U.S. life insurers and Wall Street banks:

Deutsche Bank, whose share price has been regularly setting historic lows, is one of the European banks that is heavily intertwined with Wall Street’s derivatives. (See related article below.)

As Treasury Secretary Steve Mnuchin repeats ad nauseum that this is a health crisis not a financial crisis, just remember when the financial crisis actually started: September 17, 2019 – five months before the first death from coronavirus in the U.S. (See our more than five dozen articles on this latest financial crisis here.)