These Two Graphics Show Why New York City Is the Virus Epicenter in the U.S. 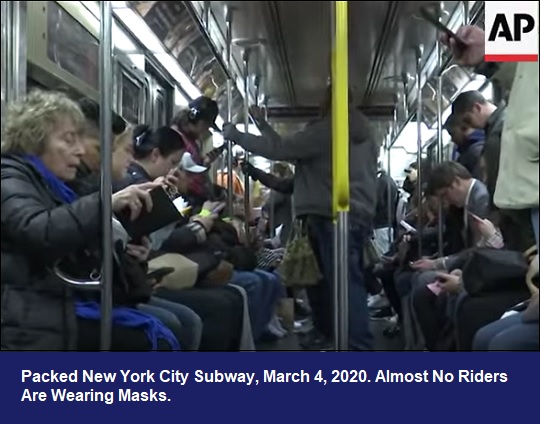 For want of a mask the largest economy in the world has been gutted, with Goldman Sachs now projecting that U.S. GDP could contract by as much as 24 percent in the second quarter.

New York City, a major contributor to U.S. GDP, is now the epicenter of coronavirus cases in the U.S. We saw this as a likely outcome from the moment that we learned that droplets could be spread from person to person through the air.

It should not have taken the CDC, the Surgeon General, and the National Institute of Health any longer than it took us to immediately recognize that New York City was going to be the epicenter of this aggressively transmissible virus and to quickly direct federal resources like ventilators, masks, goggles, plastic gowns and gloves and additional hospital beds to the area.

The first coronavirus death occurred in the U.S. on February 28 – more than three weeks ago — but New York City is still begging the federal government to get it the resources it needs to fight this deadly disease.

As of this morning, New York City was reporting more than 12,000 diagnosed cases of the coronavirus, more than half of the total for the entire state of New York and more than a third of all cases in the U.S., currently reported as 35,224.

There are plenty of people to blame for the out-of-control spread. On February 29, the Surgeon General Tweeted that the public should stop buying masks – despite scientific agreement that the virus is spread by sneezing, coughing and talking. The Surgeon General’s advice may have made sense for people living on a 10 acre farm in New Hampshire but it was dangerous advice for people who can’t afford taxis and are forced to ride a packed subway to work each day in Manhattan. 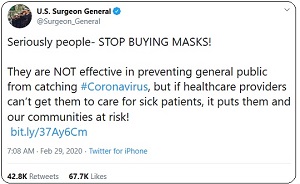 On March 4, 2020 the Associated Press published a video (screenshot above) showing a packed New York City subway with almost no riders wearing masks. The Associated Press reported that “the system was packed Wednesday, a day after the agency in charge of New York’s subways said they were going to try and clean the system every 72 hours in hopes of curbing riders’ fears about COVID-19.”

While cleaning the subway may have removed virus droplets that landed on hard surfaces in the subway cars, it did nothing to stop the spread of the virus as riders cough, sneeze and talk during their morning and evening commutes.

As of 8:25 am. this morning, the New York City subways are still running.