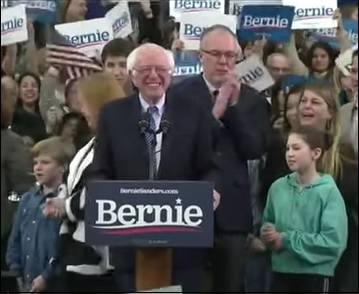 Senator Bernie Sanders is the acknowledged Democratic winner in yesterday’s New Hampshire primary, eking out a slim vote lead with 25.7 percent of the vote in the crowded field. Pete Buttigieg and Senator Amy Klobuchar came in second and third with 24.4 and 19.8 percent of the vote, respectively. The popular and respected Senator Elizabeth Warren, who hails from the neighboring state of Massachusetts, had an upset with just 9.3 percent of the vote, apparently losing ground among progressives to Senator Sanders. Former Vice President Joe Biden, who lost much of his support to fellow moderates Buttigieg and Klobuchar, registered in fifth place with a stunningly low 8.4 percent of the vote. All of the remaining candidates drew less than a 4 percent share.

But Sanders’ win last night is far more significant than the vote percentages suggest. According to McClatchy newspapers, in the past 40 years, no candidate for president (Democrat or Republican) has won both the Iowa caucuses and the New Hampshire primary and failed to become the party’s nominee for President.

Sanders has now placed first in the popular vote in both Iowa and New Hampshire, although Buttigieg has a tiny delegate lead in Iowa. (Sanders has requested a recanvass in Iowa as a result of the confused, delayed and chaotic process that stymied vote tallies for two days.)

As for Buttigieg and Klobuchar closing the gap on Sanders, that’s the product of delusional thinking by the mainstream media, at least at this point in time. National polls show Buttigieg with a 9.8 percent share versus Sanders’ 22.3 percent. Klobuchar barely shows a pulse with 3.9 percent of the national vote.

Adding to the hurdles for Buttigieg and Klobuchar, neither has any material support from black voters, which will be essential to winning enough delegates to clinch the Democratic nomination for president.

While Buttigieg is receiving a large amount of campaign donations from employees and execs at Big Tech firms like Google, Microsoft, Amazon and Facebook and lawyers at the antitrust law firms that work for Big Tech, he has also exhausted much of his campaign cash in order to achieve those good finishes in Iowa and New Hampshire – two predominantly white states. If he fails to show he can attract black and minority voters in the upcoming caucuses in Nevada on February 22 and South Carolina primary on February 29, his funding could dry up as the fat cats turn their hopes to billionaire Michael Bloomberg and his efforts to simply buy the Oval Office for a cool $1 billion of his own cash.

Klobuchar has raised the least money of any of the major candidates. As of December 31, she had spent the bulk of the $29 million she raised and had just $5 million left according to data at the Federal Election Commission. Unless she experiences a major surge in donations, she’s not going to have the money for advertising for the Super Tuesday contest on March 3 when more than one-third of Americans will cast their vote. That includes voters in Alabama, Arkansas, California, Colorado, Democrats Abroad, Maine, Massachusetts, Minnesota, North Carolina, Oklahoma, Tennessee, Texas, Utah, Vermont, and Virginia.

And while there is a lot of noise about the first contests in Iowa and New Hampshire, the hard math comes down to this fact: the big delegate counts will come out of the Super Tuesday contest with California allotting a massive 415 delegates and Texas doling out 228.

March 4 is when a great deal of dust will settle on whom the leading contenders really are.

10,599 Corporate Lawyers Have Donated to Buttigieg’s Campaign: Here Are the Dirty Little Secrets

Iowa Caucuses: Only Buttigieg and Klobuchar Seem to Know the Results