Fed Chair Powell Is Grilled on Attending Lavish Party at Home of Jeff Bezos: Jared and Ivanka, Jamie Dimon Were in Attendance 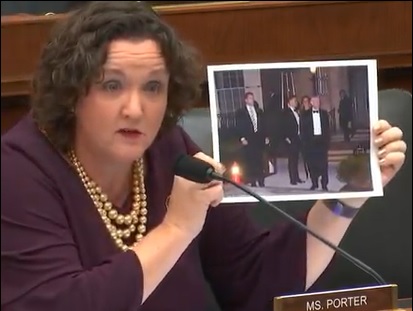 Congresswoman Katie Porter Holds Up a Photo of Fed Chair Powell Attending a Lavish Party at the Home of Jeff Bezos, One of the World’s Richest Men and CEO of Amazon

The most sizzling moment thus far today in the House Financial Services Committee hearing with Federal Reserve Chairman Jerome Powell was a line of questioning by Congresswoman Katie Porter of California.

Porter began by reminding Powell that he had “frequently spoken about wanting to maintain the independence of the Federal Reserve.” She then asked: “Do you still have that belief?” Powell said he did.

Porter then held up a photo of Powell in black tie and asked where the photo was taken. He said it was at a party following the Alfalfa Dinner at the home of Jeff Bezos. Porter then made Powell indicate that the photo was recent, sometime in late January of this year. Porter looked squarely at Powell and stated:

Porter finished the interrogation of Powell by asking him what were the leading drivers of economic growth in the U.S. since the recession of the 1970s. Powell said the hard work of the American people and technology. Porter asked him if he would be surprised that women in the workforce have actually been a bigger driver of growth than technology companies. Porter said that in the span of the last four decades, 38 million women have joined the workforce “and without those women our economy would be 25 percent smaller.”

Porter then moved on to the cost of child care for all those working women, stating that in those same four decades the cost of child care had shot up by 2,000 percent. She asked Powell if he knew what child care currently costs. He said he couldn’t answer that question because his kids were grown up — giving further evidence of his elite view of matters impacting the average American.

Powell’s answer drew a disgusted look from the Chair of the Committee, Maxine Waters.