10,599 Corporate Lawyers Have Donated to Buttigieg’s Campaign: Here Are the Dirty Little Secrets 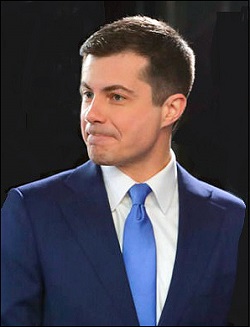 Pete Buttigieg, a 38-year old former mayor of South Bend, Indiana, a city with a population of 102,000, who has never held an elected federal office and was unknown to the majority of Americans last spring, has magically risen to the top ranks of the field of Democratic contenders for President – a field that includes three sitting U.S. Senators and a former Vice President.

On top of Buttigieg’s lack of experience in Washington, Buttigieg has almost no support from the black community, which would be essential for winning the Presidency. So exactly why has Buttigieg raised $77 million from some of the smartest and richest people in America. According to our tally from the Federal Election Commission’s data, 10,599 donor entries for Buttigieg list their occupation as lawyer or attorney. On top of that, there’s a high correlation between Buttigieg’s Big Tech donors and the law firms these lawyers work for: the law firms have big antitrust departments that work for Big Tech, at a time when it is under investigations for monopoly practices.

Buttigieg fueled the suspicions that he’s a corporate pawn by initially barring the press from his private fundraisers with big donors and failing to provide a list to the media of the lawyers, millionaires and billionaires that are raising money for his campaign (bundlers). Buttigieg now allows the press to attend his fundraisers but he has still not fully come clean on his bundlers.

Is Buttigieg simply a strawman to throw the election to Trump? Is he a strawman to throw the Democratic nomination to billionaire Mike Bloomberg — who is willing to buy the Oval Office for $1 billion of his own money. Or is Buttigieg the brainchild of the biggest corporate law firms in the country who want to eliminate Senator Elizabeth Warren from the running because she has promised to break up Wall Street’s mega banks as well as the big tech giants Amazon, Google and Facebook – all of which are cash cows for the biggest corporate law firms.

There is actually evidence to support all three scenarios. Supporting the scenario of a strawman for Trump, it’s hard to envision the heartland of America voting for Buttigieg, who is openly gay and has a husband, Chasten Buttigieg, who would be officiating at state dinners at the White House as the First Gentleman for the first time in 232 years. That image would likely turn out record numbers of Republicans to seal the election for Trump. Another Trump win would very much please the big corporate law firms whose clients have enjoyed deregulation and massive corporate tax cuts under Trump. Big Law has also gotten their law partners strategically placed in lifetime appointments in the federal courts to throw out plaintiff suits against their corporate clients.

Supporting the scenario that Buttigieg is a strawman for the diabolical Mike Bloomberg (who bought himself a third term as Mayor of New York City by financing the repeal of term limits and has now likely managed to insert himself onto the Democratic debate stage through a convenient rule change) is the fact that the Global Head of Public Policy at Bloomberg LP, the Wall Street data terminal and news outlet that is majority owned by Mike Bloomberg, is a bundler for Pete Buttigieg. The bundler is Didem Nisanci, who conveniently served as Chief of Staff at the Securities and Exchange Commission (SEC) from March 2009 to January 2013, the period after the financial crisis when the SEC failed to bring charges against any of the CEOs of the mega Wall Street banks that had brought on the greatest financial collapse since the Great Depression. As of September 14 of last year, Nisanci had contributed $2800, the maximum allowed by an individual to Buttigieg’s primary race. Prior to Mike Bloomberg throwing his own hat in the ring in November, Buttigieg had received additional contributions from other Bloomberg employees.

Bloomberg’s wealth of $61.5 billion and ongoing income derives from the data terminals he leases to the Wall Street trading floors around the globe. He showed his fealty to the hands that feed him on Wall Street as Mayor of New York City, using his police force to brutalize and bloody Wall Street protestors and coming down like the Gestapo during the eviction of Occupy Wall Street from Zuccotti Park in Lower Manhattan.

And now for the third scenario – knock Senator Elizabeth Warren out of the race. Around the same time last spring that Warren penned her scorching opinion piece at Medium on why it was critical to break up the giant tech firms Amazon, Google, and Facebook, bundlers connected to the three tech giants got busy pumping money into Buttigieg’s campaign. Ironically, this was the very thing Senator Warren was warning about in her Medium message. Warren wrote:

“Today’s big tech companies have too much power — too much power over our economy, our society, and our democracy. They’ve bulldozed competition, used our private information for profit, and tilted the playing field against everyone else. And in the process, they have hurt small businesses and stifled innovation.

“I want a government that makes sure everybody — even the biggest and most powerful companies in America — plays by the rules. And I want to make sure that the next generation of great American tech companies can flourish. To do that, we need to stop this generation of big tech companies from throwing around their political power to shape the rules in their favor and throwing around their economic power to snuff out or buy up every potential competitor.”

An analysis of donor data at the Federal Election Commission shows the following number of donor entries from Big Tech and their leading antitrust law firms to Pete Buttigieg’s campaign:

Recode reported on December 13 that some of the biggest names in tech were throwing a fundraiser for Buttigieg, writing: “A host list circulated to prospective donors for an event on Monday morning in Palo Alto, California, features individuals with family ties to some of the most prominent people in Big Tech. Netflix CEO and co-founder Reed Hastings is listed as a co-host of the event, as is Nicole Shanahan, the wife of Google co-founder Sergey Brin; Wendy Schmidt, the wife of former Google CEO Eric Schmidt; and Michelle Sandberg, the sister of Facebook COO Sheryl Sandberg, sources say.”

In no small part because of funding by Big Tech and their lawyers to the Buttigieg campaign, Warren dropped to third place in the still-challenged Iowa Caucuses, coming in behind Senator Bernie Sanders who won the popular vote and Buttigieg who has a thin lead over Sanders in delegates. Tomorrow is the important New Hampshire primary and according to polls Warren has lost ground there to Buttigieg, who is now polling in second place behind Sanders.

Another law firm that is more closely identified with Wall Street’s mega banks than with Big Tech is Sullivan & Cromwell. Politico reported that H. Rodgin (Rodge) Cohen, the Senior Chairman of Sullivan & Cromwell, and his wife, Barbara, were bundlers for Buttigieg but that their names had been omitted from Buttigieg’s bundler disclosures on his website. (We checked this morning and they’re still not listed there.) Rodge Cohen is not listed as a donor to Buttigieg in FEC records but his wife, Barbara, is listed as giving $5,000 to Buttigieg’s campaign on June 14, 2019 for the primary and general election. FEC records also show 66 entries for employees of Sullivan & Cromwell who have made contributions.

Rodge Cohen is the man who helped significantly in giving the New York Fed the greenlight to spew $29 trillion in secret cumulative loans to bail out Wall Street during the financial crisis. See our report: Sullivan & Cromwell’s Rodge Cohen: The Untold Story of the Fed’s $29 Trillion Bailout.

No one was in a better position then to know that Wall Street had created a house of cards destined to collapse and would need a bailout than Rodge Cohen. No one is in a better position today to know that if either Sanders or Warren is elected President, there’s not going to be another $29 trillion bailout of Wall Street when it collapses again. (And just how far along that collapse might be is being disguised by the New York Fed’s latest money spigot, under the clever cover of making repo loans as part of its routine open market operations. But there is nothing routine about a market that needs hundreds of billions of dollars injected weekly by the New York Fed. (See our in-depth series on this latest Wall Street bailout here.)

“As the protesters marched to protest in front of the New York Fed, an ominous chant rang out: ‘No wars! No tanks! We will burn your f***ing banks.’ With police helicopters swarming overhead, protesters chanted: ‘We are unstoppable. Another world is possible.’ ”