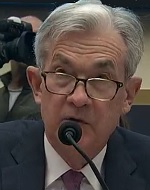 During his testimony to the Senate Banking Committee yesterday, Federal Reserve Chairman Jerome Powell let it slip out, for the first time, that the Federal Reserve has had a 10-year game plan to deal with the financial crisis. In response to a question on cyber threats from Senator Ben Sasse of Nebraska, Powell stated the following:

“They kind of pay us to be awake at night worrying about things. I would say that if you look at what happened in the financial crisis, we had a game plan there. We implemented it over the course of 10 years. I won’t say that it’s perfect or anything like that, but we have a plan that is meant to address those kinds of things.”

“Those kinds of things?” The financial crisis, fueled by corruption and lax regulation of Wall Street banks, destroyed the housing market in the U.S. and left the U.S. economy in tatters. Millions of Americans lost their jobs and their homes to foreclosure. The New York Fed was the supervisor of key Wall Street banks that caused this problem – shouldn’t it have had a 10-year game plan to prevent “Those kinds of things” instead of creating the game plan after the damage had been done?

Wall Street On Parade has been carefully following the Federal Reserve for the past decade and filing Freedom of Information Act requests. The Fed has repeatedly been non-responsive. This is the first time we are hearing about any formal 10-year game plan to deal with the worst financial crisis since the Great Depression. It’s time for the Fed to come clean with the American people about the granular details of that plan and allow elected members of Congress to vote on it.

We do, however, know that the Federal Reserve set out to keep the $29 trillion part of that secret 10-year game plan wrapped behind a dark curtain from the American people. That’s the cumulative amount of money the Fed funneled to teetering Wall Street banks and global central banks to prop up the still corrupt Wall Street trading houses. It took more than two years of court litigation, an amendment to the Dodd-Frank financial reform legislation, and the research work of the Levy Economics Institute to bring that into the light. Now the Fed is at it again, with no Congressional oversight or any vote held in Congress. (See Fed Repos Have Plowed $6.6 Trillion to Wall Street in Four Months; That’s 34% of Its Feeding Tube During Epic Financial Crash.) Is the Fed’s latest money funnel to unnamed trading houses on Wall Street also part of its 10-year game plan?

Powell’s appearance before the Senate Banking Committee was preceded the day before by his appearance before the House Financial Services Committee. Repeatedly, during both the Senate and House hearings, Powell was asked what the Fed is doing to address the growing wealth and income inequality in the U.S. that far exceeds other major industrial countries and why it cannot use those some bold, creative ideas that it brings to bailing out Wall Street to help struggling Americans and cities and towns that were devastated by the financial crisis.

Congresswoman Rashida Tlaib of Michigan on Tuesday told Powell that he was wrong that the Fed didn’t have the authority under its emergency lending powers to help municipalities like her devastated Detroit. She submitted for the record statutory language from the Federal Reserve Act showing it does indeed have that power. She told Powell:

“So Chairman, given that you actually do have the authority, can you explain to me why we shouldn’t ensure that state and local governments have access to funding during times of distress?”

Powell said that it’s “not appropriate” for the Fed to do this and it should be dealt with by the fiscal authorities rather than the monetary authorities. Tlaib responded:

“So when the Fed steps in to rescue banks in a crisis is that because you believe their role in the economy is vital…My city filing bankruptcy was devastating to so many retirees sir. Forty, fifty years they worked for the City of Detroit, saw their pensions diminished, gone. Do you not believe that the government of Detroit and Puerto Rico also play a vital role that should be preserved even if financial crises make it hard for them to borrow money?”

Powell answered: “What I believe is that’s not a job for the Fed.”

The most scathing rebuke of the Fed and the current administration came from the ranking member of the Senate Banking Committee, Senator Sherrod Brown of Ohio, a state that has seen its manufacturing base devastated. Brown’s remarks were so poignant and timely that we have included them in their entirety below:

Thank you, Chairman Crapo. Chair Powell, welcome back to the Committee. Before we start, I want to stay a few words about what happened last night, which culminated with President Trump withdrawing the nomination of Jessie Liu, who was scheduled to appear before this committee tomorrow.

I heard some of you, my colleagues and my friends, say that the president would be chastened by impeachment. Some of you told me you knew what he did was wrong, you admit he lies, but that this wasn’t bad enough to rise to the level of removal from office – he’d learned his lesson. It’s pretty clear he’s learned a lesson – the lesson he can do whatever he wants, abuse his office, and he’ll never, ever be held accountable. He’s gone on a retribution tour – starting at the prayer breakfast – a prayer breakfast – mind you – continuing through the East Room, where many of you were in the audience and applauded him as he personally attacked people who have served this country. He removed Col. Vindman, a patriot and Purple Heart recipient who spent his life serving our country. He mocked his accent, his Ukrainian accent. He removed Ambassador Sondland, a Trump appointee, after he testified to the quid pro quo. And yesterday he continued the tour, interfering at the Department of Justice and strong-arming political appointees to overrule career prosecutors. Those attorneys withdrew in protest – those professionals, I have no idea of their political party, they’re professionals, withdrew from the case, and in at least one case, resigned entirely from the Department. We cannot give him a permanent license to turn the presidency and the executive branch into his own personal vengeance operation. You all know it’s happening, even the Senator that just walked out knows that it’s happening.

Now on to the issue at hand. I welcome Chairman Powell back.

Earlier this week, Bloomberg reported on a profitable and fast-growing Spanish company. “Grifols” has opened up branches in 36 states. They buy and sell plasma – a nice, clinical sounding word that means “blood.” Americans who are struggling to make ends meet are lining up to sell their blood to put food on the table. The blood harvesting business is booming, and Grifols stock is doing great. It’s hard to think of a better metaphor for Trump’s economy.

On Monday, the S&P 500 and Nasdaq both reached record highs. In 2019, JPMorgan Chase had the best year for any U.S. bank in history — $36 billion in profits. Big corporations are spending hundreds of billions of dollars on stock buybacks and dividends. On paper, the economy has been expanding uninterrupted for over ten years. But if you talk to the vast majority of people who rely on paychecks, not investment portfolios to earn a living, you get a very different story. They’ve been bleeding for years. Most families don’t understand why the harder they work, sometimes at more than one job, the harder it gets to afford pretty much everything – child care, health care, rent, college tuition.

The people in this room may remember last September, when the financial industry went into a panic over a benchmark interest rate passing 10 percent. Wall Street faced uncertainty, so we respond — the Fed leapt into action. Smart government employees came up with a plan that led to the Federal Reserve lending about $200 billion every day into financial markets through a mechanism that hasn’t been used since the financial crisis. That’s right –$200 billion. Let me be clear – I don’t think it’s wrong for the Federal Reserve to be creative and make sure the economy keeps working. It’s in everybody’s interest for banks to keep lending money, and credit to keep flowing so businesses can invest and manufacture, and consumers can buy houses and cars.

My problem is this – when Main Street faces uncertainty, no one at the Fed jumps to action or gets creative. And we certainly don’t see tweets from the President demanding corporations raise wages for their workers. It’s hard for families to understand why Wall Street gets worked up about a 10 percent interest rate when so many families are lucky if the payday lender down the street charges them less than 400 percent. Small businesses having trouble making payroll don’t have access to so-called repo funding at their local Fed branch. The Fed doesn’t take action when its own researchers found that 40 percent of Americans don’t have the cash to cover a $400 expense in an emergency. Nobody raises alarm bells when 40 million Americans predict they’ll miss at least one credit card payment, which means $1.2 billion in late fees will flow from the pockets of struggling families to ultra-profitable banks.

Serious people haven’t dropped everything to bring down the cost of housing or raise wages once they found out that one-in-four renters are paying more than half their income toward housing. People look at that and they see two different economies – and two different responses. We hear a lot about the divides in this country between Red and Blue, between rural and urban, between the coasts and the heartland, between people who watch MSNBC and people who watch Fox – but people in all those places feel like no matter how hard they work, they can’t maintain any real economic security. The real divide I see is between those whose problems are considered an “emergency,” and those whose struggles Wall Street and large parts of Washington decided they can ignore. The Fed needs to get creative for the people who make this country work – particularly because it’s become pretty clear that the President and the Majority Leader aren’t about to.

President Trump brags about a soaring stock market that he’s pumped up with deficit-busting, trillion dollar tax breaks for billionaires – deficits exceeding a trillion dollars, don’t hear much about that anymore – and now he wants to pay for those tax cuts (sorry we’ve got a big deficit we gotta pay for those tax cuts) – as he said in Davos and he’s saying in his budget – by cutting Medicare and Medicaid and Social Security. He lies about a “blue collar boom,” I heard at the State of the Union that night, I was fairly incredulous, when in my own state of Ohio job growth has been anemic or nonexistent, manufacturing jobs are stalling compared to when he took office. And now, in his budget, after promising workers in Lordstown, Ohio don’t sell your homes, we’ll bring those jobs back, to kill the loan program that was giving the community of Lordstown a little bit of hope that some manufacturing jobs would actually come back.

Chairman Powell, you and your highly-capable staff at the Fed have been proactive and creative in protecting Wall Street and the money markets from this President’s erratic behavior. And I’m glad you have. We’re all appreciate of that. But what I hope to hear from you today is how you’re going to be proactive and use that same level of creativity to make this economy work for everybody else.