Stock Exposure Has Exploded at JPMorgan’s Federally-Insured Bank to $2.4 Trillion 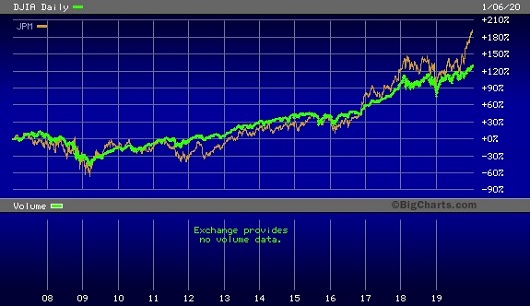 Federally-insured banks are not supposed to be making large speculations in the stock market. They are supposed to be using bank deposits to make loans to worthy businesses and consumers to help grow the U.S. economy and keep the United States competitive on the global stage.

But according to the official reports from the federal regulator of national banks, the Office of the Comptroller of the Currency (OCC), since December 31, 2010 the federally-insured bank owned by the monster trading house of JPMorgan Chase (JPMorgan Chase Bank NA) has increased its equity (stock) derivative bets from $337 billion to $2.4 trillion as of its latest report for the quarter ending September 30, 2019. (The data is found in a graph titled “Table 10” in the appendix of each of the quarterly reports published by the OCC.)

During the period that JPMorgan Chase’s positions in stock derivatives have exploded, both its own stock price and the Dow Jones Industrial Average have been on a sharp upward trajectory. (See chart above.)

The $2.4 trillion notional (face amount) of stock derivative exposure that JPMorgan Chase has at its federally-insured bank is a very big revenue producer for the bank. According to the OCC’s report for the quarter ending September 30, 2019, all federally-insured banks in the U.S. which traded equity derivatives made $1.8 billion in revenues, of which JPMorgan accounted for $1.15 billion or 64 percent of all revenues of all banks trading stock derivatives.

Just how many federally-insured banks in the U.S. have the guts to trade stocks or stock derivatives at their taxpayer-backstopped bank? Not that many.

How is it that JPMorgan Chase keeps taking outsized risks, pays billions of dollars in fines, gets off easy with deferred prosecution agreements from the Justice Department for its criminal felony charges, and goes right on its merry way of taking huge risks? (See related articles below.) The answer is that Congress is allowing it to get away with all of this instead of breaking up the bank as the Congress of 1933 did when it passed the Glass-Steagall Act and banned the trading houses on Wall Street from owning federally-insured banks. That legislation was repealed under the Bill Clinton administration in 1999 and it’s been downhill for the U.S. financial system ever since.

Below are the notional amounts that JPMorgan Chase Bank NA has held in stock derivatives at year-end since 2010 and at September 30, 2019.

JPMorgan Has Radically Changed Its Balance Sheet, Shrinking Its Cash at the Fed by $145 Billion

Could JPMorgan Chase Be Hit with a Fourth Felony Count for Rigging Precious Metals Markets?