JPMorgan Has Radically Changed Its Balance Sheet, Shrinking Its Cash at the Fed by $145 Billion

JPMorgan Chase is not a bank that federal regulators can simply put on autopilot and hope for the best. When the U.S. Senate’s Permanent Subcommittee on Investigations conducted a formal probe into how the bank lost $6.2 billion of its federally-insured bank’s deposits by gambling in derivatives in London in 2012, the Chair of the subcommittee, former Senator Carl Levin, said that the bank had “piled on risk, hid losses, disregarded risk limits, manipulated risk models, dodged oversight, and misinformed the public.” Over the past five years, the bank has admitted to three criminal felony charges brought by the U.S. Department of Justice and is currently under an ongoing criminal probe by federal prosecutors over charges that its traders ran an eight-year criminal enterprise out of its precious metals trading desk in New York.

But it seems that the Federal Reserve, the regulator of the largest bank holding companies in the U.S., which include JPMorgan Chase, is letting  JPMorgan Chase call the shots on the amount of cash reserves it has to hold at the Fed in order to remain viable during a financial panic.

Since 2015, large U.S. banks have been required by regulators to meet a Liquidity Coverage Ratio (LCR) by holding a specified amount of “high-quality liquid assets” (HQLA) that would be adequate to meet cash outflows over a 30-day period of market stress. The idea is to prevent a repeat of the implosion of Wall Street banks that occurred in 2008 when the Federal Reserve had to step in and effectively bail out most of the big banks on Wall Street and their foreign derivatives counterparties to prevent a complete collapse of the U.S. financial system.

According to the most recent 10-Q that JPMorgan Chase filed with the Securities and Exchange Commission, from September 30 of last year to September 30 of this year, the bank reduced its cash position that was predominantly held at Federal Reserve banks by $145 billion from $344.66 billion to $199.8 billion. During the same period, to meet its required level of High-Quality Liquid Assets (HQLA), it increased its securities holdings by $147 billion. (See chart below from the 10-Q.)

According to a note in the SEC filing, the securities that have replaced the liquid cash include “Predominantly U.S. Treasuries, U.S. GSE [government-sponsored enterprises] and U.S. government agency MBS [mortgage-backed securities], and sovereign bonds net of applicable haircuts under the LCR [Liquidity Coverage Ratio] rules.”

None of these securities are as liquid as cash and without knowing the foreign countries associated with these “sovereign bonds” it is impossible to say just how liquid they are.

What makes this move out of Federal Reserve cash by JPMorgan Chase particularly curious is that the CEO of the bank, Jamie Dimon, admitted during his earnings call with analysts on October 15 that his bank didn’t have adequate funds on deposit at the Federal Reserve to engage in the repo market on September 17 when overnight lending rates spiked to 10 percent and the Federal Reserve had to pump money out to Wall Street for the first time since the financial crisis. Dimon stated that the remaining $120 billion in cash that the bank now has on deposit at the Fed “is required under resolution and recovery and liquidity stress testing. And therefore, we could not redeploy it into repo market, which we would’ve been happy to do.”

Looking at the SEC filing, Dimon’s statement seems to have fallen short of the full story, for example, that the bank made the willful decision over the past 12 months to dramatically draw down its cash position at the Fed and move it into securities.

In other words, as its trading and off-balance-sheet exposures increased, thus increasing its risk profile, its cash reserves at the Fed declined materially. That doesn’t sound like what the largest federally-insured commercial bank in the U.S., which holds $1.6 trillion in mom and pop deposits, should be doing as recession clouds darken the global landscape and the Atlanta Fed GDPNow forecast is predicting an anemic 1 percent GDP growth in the U.S.

If the U.S. is going to weather an economic downturn, it needs commercial banks that are willing and able to lend to businesses and consumers, not shrink their loan portfolios and move further into a trading casino mindset. The only workable solution to restore the safety and soundness of U.S. commercial banks is to permanently separate them from the trading houses and investment banks on Wall Street. That means restoring the Glass-Steagall Act that protected the U.S. financial system successfully for 66 years until its repeal under the Bill Clinton administration in 1999.

Since September 17, the Federal Reserve has been pumping out hundreds of billions of dollars in super cheap loans to Wall Street trading firms under the guise of needing to keep the repo loan system running. Since that time, not one Congressional hearing has been called to inquire into why this is necessary for the first time since the financial crisis. Today, the Chairman of the Federal Reserve, Jerome Powell, will testify before the Joint Economic Committee of Congress, beginning at 11:00 a.m. It will be interesting to see if any elected member of Congress will ask the necessary hard questions on the Fed’s repo loan bailouts. 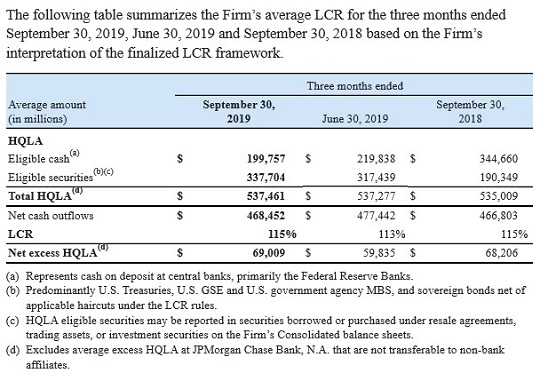 Chart from JPMorgan Chase 10-Q Filed with the SEC