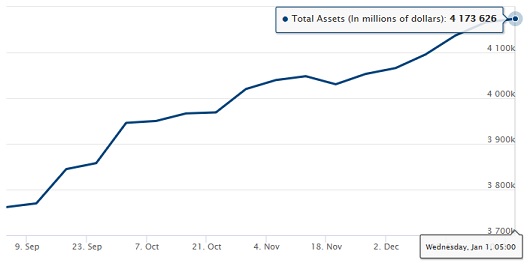 On September 4, 2019, the assets on the balance sheet of the Federal Reserve stood at $3.761 trillion. As of January 1, that figure is $4,173,626,000,000. That’s an increase of $413 billion in just the past 119 days and the Fed does not seem inclined to turn off its money spigot to Wall Street anytime soon. At the rate the Fed is now going, its balance sheet is likely to eclipse the $4.5 trillion all-time high it reached in 2015 as a result of the unprecedented sums it funneled to Wall Street following the epic financial crash in 2008 and its three rounds of quantitative easing (QE) to keep interest rates low to appease Wall Street’s trading houses and their trillions of dollars in interest-rate derivative bets.

When Jamie Dimon, Chairman and CEO of JPMorgan Chase, testified to the Senate Banking Committee on June 13, 2012 about billions of dollars in derivative losses at his federally-insured bank, he had this to say about the major dangers facing his bank – the largest bank in the U.S. “There are two major risks that J.P. Morgan faced: dramatically rising interest rates and a global type of credit crisis. Those are the two biggest risks we face,” Dimon stated.

The Fed, through its open money spigot and trading arm – the New York Fed – has been a Fairy Godmother to Jamie Dimon. It has kept short-term interest rates at historic lows since 2008 and postponed the inevitable global financial crisis long enough to allow Jamie Dimon and his pals on Wall Street to become billionaires. The flipside of Jamie Dimon’s wish list has been to impoverish millions of retirees who have seen their interest income on Treasury notes and Certificates of Deposits cut in half for more than a decade and to fuel an unprecedented corporate debt bubble in the U.S. as a result of that cheap money.

Now, instead of the Fed winding down its latest money spigot that it opened on behalf of Wall Street’s trading houses on September 17, it appears to be gaining momentum. Yesterday, the $35 billion that the New York Fed provided to Wall Street in 14-day term loans was oversubscribed by $6.12 billion. On top of that, the New York Fed also pumped out $63.919 billion in overnight loans for a total of $98.919 billion – in just one day.

The New York Fed’s latest money spigot has been in operation every business day since September 17 when overnight rates on repo loans spiked from an average of 2 percent to 10 percent. The New York Fed stepped in as lender-of-last-resort to bring the rate back down, despite the fact that this is clearly where the free market wanted to price these loans. Yesterday’s New York Fed loans were pumped out at the preposterously low rate of 1.55 percent interest.

Repo loans are typically made between Wall Street banks, hedge funds and money market funds. The New York Fed is making its repo loans available exclusively to its 24 primary dealers, which are, in fact, the primary trading houses on Wall Street. Many of these firms could not borrow in the open market at rates anywhere near 1.55 percent. So the New York Fed is essentially providing another bailout to Wall Street and calling it part of its “open market operations.”

The New York Fed is just one of the 12 regional banks of the Federal Reserve system. But because it supervises the bank holding companies of two of the largest federally-insured banks in the country (JPMorgan Chase and Citigroup) and four of the largest Wall Street trading houses in the country (JPMorgan Chase, Citigroup, Morgan Stanley and Goldman Sachs) it has, over time, morphed into both a captured regulator and a captured bank vault. (See These Are the Banks that Own the New York Fed and Its Money Button.)

What is remarkable about these super cheap loans to Wall Street at this time is that the Fed is simultaneously insisting that the Wall Street banks are in fine shape. On December 4, the head of bank supervision for the Federal Reserve, Randal Quarles, testified as follows to the House Financial Services Committee:

“The Board’s latest Supervision and Regulation Report, which we published last week, confirms the current health of the banking system. It depicts a stable, healthy, and resilient banking sector, with robust capital and liquidity positions… It describes steady improvements in safety and soundness, with a gradual decline in outstanding supervisory actions at both the largest and smallest organizations.”

The stock market does not appear to be in a crisis since it set multiple historic highs in December – likely on the back of all that cheap money flowing out of the New York Fed to Wall Street’s trading houses.

Wall Street On Parade used one of the few avenues still available to American citizens to peel back the dark curtain that surrounds Wall Street and its crony regulators. On October 2, 2019 we filed a Freedom of Information Act (FOIA) request with the New York Fed. We requested “emails or any other forms of written correspondence from the Federal Reserve Bank of New York to JPMorgan Chase or any of its subsidiaries or affiliates containing any of the following words or phrases: ‘repo,’ ‘repurchase agreements,’ ‘overnight lending,’ or ‘reserves.’ ”

We explained our request as follows:

“It has been revealed in a published report by Reuters that other Wall Street banks are pointing to JPMorgan Chase as a cause of the distress in the overnight repo market because it drew down $158 billion from its cash deposits at the Fed. We are not asking for any protected supervisory records. We are simply asking to see any correspondence that would explain why JPMorgan Chase did this and what the Fed’s reaction was.”

Our FOIA request was acknowledged by the New York Fed as received on October 2. We should have had a meaningful response on November 1. Instead, we received an email advising that we would not hear further from the New York Fed until December 5, 2019.

Instead of the mandated 10-day extension that is allowed under law, we were given more than a month-long extension. On December 5, the New York Fed emailed us to say it was extending the time to respond to January 9.

Tomorrow is January 9. We’re not holding our breath.